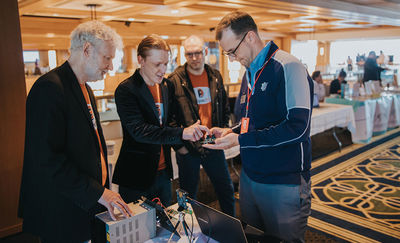 In this fourth and final article in a series called “The Big Small,” Bryan Ritchie and Nick Swisher discuss the decades-long decline of entrepreneurship, the consequences associated with this and why and how the IDEA Center is determined to be part of the solution that helps reverse this trend.

In our first “Big Small” article, “The Economic Benefits of Startups,” we explain how startups are responsible for all net job growth in the United States, experience growth rates substantially higher than other firms and have a fundamental impact on overall economic productivity in our economy. In our second article, “Startups: the Engine of Innovation,” we explore how startups are responsible for a great deal of the innovation that happens, and in so doing, routinely open new markets, upend others and, ultimately, change the world. And in our third article, “The Entrepreneurial Path Creates Key Skill Sets and Traits,” we describe how entrepreneurs develop important character traits and skill sets that make them extremely valuable to society as both leaders and contributors to business and to our communities. In short, the argument, which the data support, is that startups are essential to the economy, to society and to our lives.

Many economists say that this is nothing short of a looming crisis. According to John Lettieri, the co­founder and senior director for policy and strategy at the Economic Innovation Group, “U.S. economic dynamism is the fundamental challenge of our time, and the decline of entrepreneurship is its central and most problematic feature. This decline has far-­reaching implications….Historically, the churn caused by a steady influx of new businesses has acted as a kind of shock absorber for our economy. This is no longer the case. Even as the global economy has undergone massive transformations driven by technology and globalization, the U.S. economy is rapidly becoming less flexible, less able to adapt and less efficient at allocating resources​—including its most precious resource: human capital….The consequences are dire. A less entrepreneurial America is one with increasingly limited opportunities to realize the American Dream.”3

Lettieri is hardly the only leading voice to raise the alarm about the consequences of the decline in entrepreneurship. Mark Zandi, chief economist at Moody’s Analytics, for example, recently said that, “We should be sending off yellow flares now" regarding this issue.4 And, John Dearie, a respected policymaker and director of the Center for American Entrepreneurship said that, “...this is nothing short of a national emergency.”5

Given the possible consequences to our future and to the economy, promoting and nurturing entrepreneurship is vital at all levels in our society: early education, K-12, civic groups, families, businesses, churches, government and higher education.

While the IDEA Center at the University of Notre Dame can’t obviously single-handedly reverse the decline in entrepreneurship in our country, we can help lead a change in our region. In particular, we are focused on producing high potential startups, a phrase introduced in our first “Big Small” article. High potential startups are companies based on innovative new technology or process, have an international or national focus, experience strong demand for their products and/or services and grow rapidly. As a result, they make disproportionate economic contributions in the form of employment, economic output, productivity and innovation. Research has shown that high potential startups have increased in recent years and that it is this increase that has helped offset the overall decline in entrepreneurship.6

The IDEA Center is set up to produce many high potential startups over the coming years. This is because the process we use to create startups, the Commercialization Engine, necessarily weeds out company ideas that are too small in scope or aren’t likely to experience rapid growth or have major impact. Indeed, over 80 percent of ideas submitted to the IDEA Center fail for various reasons, including on grounds just mentioned. The startups that do successfully emerge from this process are highly vetted and derisked by experts, potential customers and funders. Because of this, their chances of being successful and making an impact on the economy and in people’s lives are much higher than had they not gone through the Engine’s robust process.

While the 80 jobs the IDEA Center’s 27 startups have created so far this year may initially seem small, numbers such as these are quite typical for early-stage companies. Startups like these that emerge from universities often operate with just a few employees for the first few years of their existence. Exponential job growth only begins when high-potential startups fully enter their markets and establish their place in them, something that can take anywhere from three to even a dozen years. In another ecosystem we're familiar with, startup growth started small, but 15 years in, over 10,000 jobs had been created and $700 million in external investment funding had been secured for 300 startups we followed. So, small might be where things start, but, if done right, it's not where they end!

The Role of the IDEA Center

In conjunction with the faculty, student, and alumni of Notre Dame and community members from South Bend-Elkhart region, the IDEA Center started 27 companies in 2017. This year we are working to get 30 startups off the ground with an additional goal of increasing that number each subsequent year. Over time, with the help of local, regional and national partners, the creation of many rigorously vetted and derisked high potential startup companies will create a strong virtuous cycle of economic development. More startups will draw more funding, which will catch the attention of more entrepreneurs, which will attract more entrepreneurial faculty and students, which will result in more discoveries with practical application potential, which will provide ideas for more startups! Before long, South Bend-Elkhart will begin to look more like other innovation hubs such as Ann Arbor, Michigan; Madison, Wisconsin; Boulder, Colorado and Gainesville, Florida. And perhaps most cool, if it can be done in South Bend-Elkhart, why wouldn’t the same process and approach work in Brownsville, Texas; Mumbai India; or Guatemala City, Guatemala?

The IDEA Center sources ideas for its startups from Notre Dame faculty, students, alumni and the community. If you have an idea for a startup, we invite you to visit https://ideacenter.nd.edu/connect-with-us/.