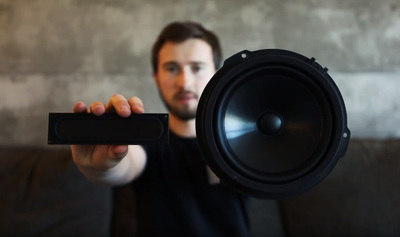 Christian Femrite, founder and vice president of engineering at Resonado visually comparing one of the company's speakers (left) to a standard audio speaker (right)

In this second article in a series called “The Big Small,” Bryan Ritchie and Nick Swisher discuss how and why startups are the main drivers of innovation and new technology in the world.

The upstart startup Tesla has out-innovated decades-old automaker behemoths GM, Ford, and Toyota in the field of electric cars. Airbnb has surpassed Marriott and trails only Hilton in lodging industry revenue. Uber and Lyft have completely disrupted long standing ground transportation companies. And SpaceX created the first reusable rocket, moving innovation from NASA to the private sector and challenging the stalwarts Boeing and Lockheed Martin.

Startups not only drive the bulk of job growth in the U.S. economy, as explained in our first article, they also create new markets, or completely overhaul old markets, by innovating products previously unknown that transform the world. Companies such as Apple, Microsoft, Facebook, Reddit, Yahoo, and Google, while giants today, were once small startups founded by ambitious college students. The products they created unquestionably changed the way business is done and, more importantly, how we live our lives. Very few of us can go an hour, let alone a day, without using one of their products.

Research has shown that small, young, agile startups are more likely to achieve technological leaps and bounds than those more established companies that are focused on gradual improvements and protecting entrenched business models. Entrepreneurs who dream big for the future and push high-growth companies, like Jeff Bezos of Amazon, Elon Musk of Tesla and SpaceX (compared to startups whose founders are happy to make a steady, comfortable living), account for about half of job growth even though they’re just 15 percent of overall firms, according to a 2016 report in MIT Technology Review. They also invest a bigger share of their returns in research and development, which, in turn, further drives innovation in a virtuous cycle.

An article by the Silicon Valley Innovation Center explains that small startups with close, vision-sharing teams are able to translate an idea quickly into a product, then quickly iterate it based on customer responses in order to satisfy consumer demand. They easily and rapidly discard unpopular features and tweak promising ones with much faster decision-making abilities than a multilayered corporate bureaucracy. Because startups function closer to customers, they can produce items that are more economical because they have no wasted features, making them attractive to a broader market. The high stakes of a startup make team members highly motivated to do whatever it takes to succeed.

“Without great motivation, creating innovative products wouldn’t be possible,” according to the post. “Startups are not scared by accelerating changes in the business world; they continuously improve products and look for new options.”

Large corporations are increasingly recognizing the value of the lean approach utilized by startups, reviving the idea of corporate entrepreneurship (called intrapreneurship) that was made famous by Steve Jobs’s Macintosh group.

“Check any business magazine today, and you'll see evidence of this shift,” writes author Ken Tencer, CEO of SpyderWorks Inc., in the May 16, 2018, edition of The Globe and Mail.“The business models everyone is copying are those of Etsy, Zappos, Airbnb, Warby Parker and other creative, mission-based innovators. No one wants to be the McDonald's of their industry (low quality, cheapest) any more. Not even McDonald's.”

Tencer quotes Hans Balmackers, program and partnership chief of the international Intrapreneurship Conference: “The business landscape has changed. Consumers are more choosy today, and startups are better able to meet that demand. Intrapreneurship is an opportunity to do more experiments, faster and cheaper.”

Entrepreneurs should welcome the development rather than fear competition from large corporations, Tencer says, because this will lead to: faster-moving, more risk-tolerant markets that benefit small businesses; more funding available for good ideas; and corporations being more interested in purchasing successful startups, thus streamlining exit strategies for founders.

Innovation from the IDEA Center

The 27 startups created with the help of the IDEA Center from July 2017 to June 2018 are young, the majority being less than a year old. While they have already reported over $4 million of inward investments and grants, 80 jobs, 23 new products, and over $500,000 in product sales, it’s too early to tell exactly how they will contribute to the remarkable advance of technology that is changing the world, although there are already some encouraging signs.

One of the IDEA Center’s recent startups, Pareto Life Sciences, is on the verge of becoming the world’s first stem cell marketplace, a move that may completely disrupt the bone marrow donor registry model. At any one time, approximately 7,500 people are actively searching for a bone marrow donor; and at least 3,000 people die each year because they cannot find a matching donor. Up until recently, bone marrow was treated by law as an organ. This prevented donors from receiving compensation for their donations and had the effect of keeping the number of bone marrow transplants relatively low. The 9th Circuit Court of Appeals, however, recently ruled that bone marrow is not an organ, thus paving the way for donor compensation and its likely accompanying increase in the number of bone marrow donations. Capitalizing on this ruling, Pareto is setting up a system whereby donors will receive up to $10,000 per donation of bone marrow. Using a swab kit and a human leukocyte antigen (HLA) database, Pareto will connect willing donors with patients to treat blood-related diseases and cancers. The company believes it will be able to help hundreds, if not thousands, of those who may not have had a chance to receive a bone marrow transplant prior to the 9th Circuit’s ruling and, at the same time, completely disrupt the process bone marrow donations adhered to prior to this ruling.

Just as Pareto looks to transform the way bone marrow donations are made, another recent IDEA Center startup, Resonado, looks to radically change the look and sound of the audio speaker. Resonado manufactures speakers that utilize the patented flat core speaker technology, which reduces the size and weight of speakers up to 70 percent, decreases manufacturing costs up to 30 percent, and significantly increases design flexibility, all while providing superior sound quality. The result are bluetooth-enabled speakers only slightly larger than a credit card and weighing only 72 grams but able to put out over 12 Watts of power of high-resolution audio, an output that can easily fill a room or outside space.

Pareto and Resonado are just two examples of the kinds of technologies emerging from the IDEA Center that we hope will change their respective industries. A number of our companies will fail. We understand this and accept it as part of the dynamic world of startups, but by continuously producing high potential startups like Pareto and Resonado that have been vetted and derisked, our chances of being part of the startup revolution and producing companies that will change industries and advance innovation forward increase substantially.