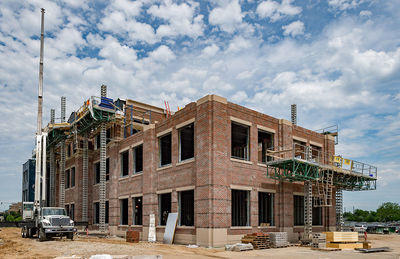 The Construction of Quinn Hall, the home of the IDEA Center

From its founding in 1842 until 2017, 33 startup companies were created at the University of Notre Dame based on research discoveries. By comparison, the 27 startups launched between July 2017 and June 2018 -- the first year of the University’s new IDEA Center’s operation -- has been exceptional by any measure. We expect this new, greatly accelerated pace of startup formation to be the new normal at Notre Dame.

In a series of four short articles called “The Big Small,” Bryan Ritchie and Nick Swisher of the IDEA Center will explain the reasonings behind why the IDEA Center is committed to producing startups. We will examine the economic benefits of startups, how they drive innovation and new ideas forward, why they create leaders and develop positive traits, and why and how the IDEA Center will be producing dozens of high-potential startups every year, with powerful impacts on Notre Dame and our neighbors in the South Bend-Elkhart region of north-central Indiana and southwest Michigan.

This first article, “The Economic Benefits of Startups,” explores the remarkable impact startups have on jobs, economic growth and productivity.

Recent research confirms what entrepreneurs have long suspected: startups drive the creation of new jobs. “Without startups, there would be no net job growth in the U.S. economy,” explains Vivek Wadhwa, a distinguished fellow at the Labor and Worklife Program at Harvard. “From 1977 to 2005, existing companies were net job destroyers, losing 1 million net jobs per year. In contrast, new businesses in their first year added an average of 3 million jobs annually.” While that number dipped during the Great Recession, signs of new dynamism in the economy, including startups, has emerged in recent years.

The Bureau of Labor Statistics found that the number of new private establishments, including both expansions and startups, increased 2.5 percent in early 2016, which is nearly as fast as the boom years of the 1990s.

Not all startups survive, of course, and many that do don’t aim to grow fast. Those that do, however, known as high-potential or high-growth firms or scaleups, are only 15 percent of all companies but account for nearly half of all new jobs created. A May 2016 report by the Kauffman Foundation showed that its Growth Entrepreneurship Index, which measures growth of entrepreneurial businesses, saw its largest increase in more than a decade, mostly because more startups than before were reaching medium-sized or higher growth in their first five years (https://www.kauffman.org/kauffman-index/reporting/startup-activity).

Not only are startups responsible for most net job growth, a 2017 report by the Progressive Policy Institute found that private sector job growth is significantly higher in economic regions where startup activity is high. By contrast, regions with little startup formation activity experience less than half the job growth of areas where the reverse is true (http://www.progressivepolicy.org/wp-content/uploads/2017/05/How-the-Startup-Economy-is-Spreading-Across-the-Country-%E2%80%94-and-How-It-Can-Be-Accelerate-final.pdf).

The good news is that the same study found that the startup movement has spread beyond the 10 traditional tech centers and the 35 biggest metro areas. Indeed, nearly half of net new establishments opened in lesser populated areas in 2016, a dramatic increase from less than 20 percent in the previous seven years. At the same time, startup activity has spread from internet and information technology companies to a wide range of industries, including manufacturing, healthcare, retail, and transportation. Startups tend to cluster in an ecosystem where they can find the necessary resources for success, including universities, incubators, public-sector and private-sector support, and expert services like legal, accounting, and consulting (https://www.entrepreneur.com/article/302488).

“A misperception has taken hold that you have to be an entrepreneur living in Silicon Valley, New York City, or Boston to attract venture investment and successfully scale and grow your company,” Bobby Franklin, president and CEO of National Venture Capital Association, wrote in Kauffman’s 2017 Index. “Nothing could be further from the truth. Entrepreneurship is alive in all corners of the United States, with pockets of entrepreneurial innovation sprouting up across the country at an increasing rate. In fact, entrepreneurs in all fifty states and the District of Columbia raised venture funding in 2016.”

Impact on Growth and Productivity

A 2017 report by the Center for Economic Studies at the U.S. Census Bureau found that, “High growth output firms are disproportionately young and make disproportionate contributions to output and productivity growth.” The authors found that “...young firms have higher median growth than their more mature counterparts,” meaning they tend to have a larger increase in the production of goods and services than other businesses do. Likewise, a report by Spencer L. Tracy, Jr. of the Corporate Research Board, found that such high potential companies “...grow at rates far beyond those of ordinary companies--in some instances several hundred percent faster.”

Furthermore, economists have long known that productivity is largely driven by technological progress. High potential startups are disproportionately more advanced and that drives productivity. Indeed, the previously mentioned report by the Center for Economic Studies found that economic productivity, which is generally measured as output per employee, is also disproportionately higher amongst startups. The authors report that “at least half” of all productivity growth in the economy “...is attributable to employment being reallocated from less productive to more productive firms…” and that “young firms contribute disproportionately to this contribution from reallocation.” Adding to this, a 2011 paper published by Small Business Administration found that high growth firms, which the authors also found to be young, “...generate more revenue with the same share of human capital inputs,” than older companies, again because they tend to be more technologically advanced than other businesses, a finding they found to be true across all industries.

While startups may lack the political or financial power of Wall Street firms, rarely make the Fortune 500 or Fortune 100 lists, and receive far less press than big companies, their collective contribution to the economy is essential. Startups, particularly high-potential ones, are responsible for nearly all net job growth, experience growth rates substantially higher than other firms, and have a fundamental impact on overall economic productivity in our economy. In other words, startups’ contribution to our economy is the “big small.” This is the primary reason why the IDEA Center is devoted to their creation.

In the next article, “Startups: The Engine of Innovation,” we will show how startups produce innovations so fundamentally disruptive and transformative that they routinely change how we work and even how we live.