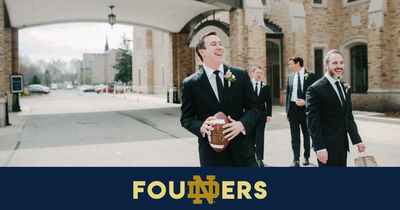 You could say that James Fitzgerald came to the University of Notre Dame for the football but stayed for the opportunity to build a foundation in entrepreneurship.

“My brother was at Notre Dame and I was at Lehigh University. He invited me to South Bend to go to a game with him. The Irish were 8-0…the atmosphere was electric…ultimately, I transferred in my sophomore year,” he recalls.

Football wasn’t the only draw. Fitzgerald liked Notre Dame’s computer engineering curriculum, which was focused on hardware. He also got hooked on the McCloskey New Venture Competition early in his sophomore year, entering and reaching the semi-finals for three straight years.

“I loved McCloskey’s mixture of entrepreneurship and engineering. It was a big commitment; you really had to think through your business model, from concept through commercialization, and write a full-fledged business plan. I took away so much knowledge,” he says.

Fitzgerald had another important takeaway from the competition. In year two, his entry was FitzyTV, an all-in-one hardware device that aggregated a person’s media that was kind of similar to Roku’s video streaming device today. Though it didn’t take top prize, the self-described media geek held onto the idea and the name.

After graduation, Fitzgerald was recruited Hewlett Packard as software design engineer for a small, internal start-up group working on a digital telephone. It was no desk job. “They threw me into the deep end of the pool,” he says. “Not long after I joined Hewlett Packard, they flew me to China to research manufacturing. My McCloskey skills came in handy.”

Fitzgerald stayed with the company for more than four years, becoming one of the first engineers recruited for Hewlett Packard’s emerging software business in Silicon Valley. In 2010, he joined a Bay Area startup called ItsOn that had a cloud-based platform for enhancing the performance of mobile networks. He was employee number six.

Over the next few years, Fitzgerald honed his experience in scaling companies. During his tenure, he helped grow the company to a team of more than 170, managed a team of 14 Android engineers, developed and patented technology for mobile devices, and shipped software to millions of Android devices. In the back of his mind, there was an unfinished idea. A McCloskey semi-finalist idea. An idea that with fine tuning was ready for prime time.

In January 2018, FitzyTV returned. Not as a re-run of Fitzgerald’s college hardware device, but as a Cloud-based DVR and streaming TV platform that allows people to watch and record programs from any smart television or mobile device without a cable box.

He explains the reboot. “I’ve always been big into media and saw a problem in the streaming video world. There are lots of different services and browsing all of them is time consuming and complex. A person could have 15 different streaming apps on their phone; I wanted to make it easier to enjoy their media.”

Using a freemium model, where users can opt for free or more comprehensive paid services, Fitzgerald soon had the FitzyTV app working with hundreds of TV channel providers and available for download on Amazon Fire TV devices, Android TV and Android mobile devices. Users could log into existing pay TV packages—cable, satellite or streaming—and watch and record whenever and whatever they like.

Early adopters were thrilled, but scaling widespread use of an app, regardless of how wonderful it is, can be a slog, an expensive slog. While cloud-based software-as-a-service companies are less capital intensive to launch than hardware companies, Fitzgerald needed investors.

Perhaps it was the luck of the Irish or his early McCloskey successes, but in May 2019, Fitzgerald was chosen to participate in Batch 25 of the prestigious 500 Startups accelerator program in San Francisco. He and fellow Batch 25 participants received $150,000, four months of intense mentoring and the opportunity to pitch to 1000 people during the program’s demo day. His selection couldn’t have been better timed. Says Fitzgerald, “I needed someone to take a chance on me.”

After the 500 Startups program concluded, the two greatest challenges facing the company were establishing partnerships and raising a seed round. Fitzgerald met Rich Ezekiel who ran partnership initiatives at Netflix and was also a senior partner at Andreessen-Horowitz, one of the top venture capital firms in Silicon Valley. Fitzgerald and Ezekiel worked together to re-brand the company and in mid-August, FitzyTV became Stremium, a name that more clearly reflects the product-market fit and embodies their vision of being the premium streaming solution for media aficionados.

The re-brand has come with more streamlined messaging, not simply to users—who now number more than 100,000—but also to potential corporate customers that realize the market is rapidly moving away from cable boxes to the cloud.

“People want to stream on their televisions and devices, and we are the only third-party, cloud-based DVR and streaming aggregation solution that lets people ‘cut the cord’ and save money without compromising their media enjoyment,” Fitzgerald says. “Cable and media companies are starting to see Stremium as a way to distribute content and retain customers while removing the expense of purchasing, managing and servicing cable equipment.”

The COVID-19 pandemic and continuing call for social distancing has created huge demand for streaming television shows and movies, to which Fitzgerald says, “Bring it on!”

“Early on we were advertising on Facebook and now our growth is largely from word-of-mouth. Our dashboard shows that once people start using Stremium, they’re hooked. We can see the number of minutes people were on specific channels and popular shows. It really sheds light on streaming content. Our interest from investors is up as a result,” he says.

Fitzgerald was very excited. “We are about to kick-off a new fundraising round and this validates our product-market fit. Seeing the passion users have for our product is what keeps me going.”

The serial student entrepreneur now serious Bay Area startup CEO offers this advice to future entrepreneurs. “Don’t wait to get started. Don’t be afraid of what you don’t know. I’ve learned so much from Stremium.”