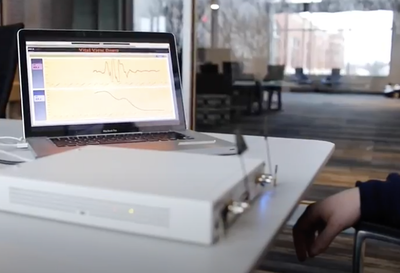 Dr. Tom Pratt, Research Professor in the Department of Electrical Engineering ath the University of Notre Dame, has developed a means of processing radio frequency (rf) signals to remotely sense the surrounding environment. The technology has shown promise in a number of applications. Initial demonstrations in the lab showed the potential of the technology. However, these first tests required two distinct phases due to the limitations of the equipment used. The first phase involved collection of the rf data while the second involved processing that data and displaying the results.

The IDEA Center worked with Dr. Pratt’s lab and engaged both external and internal teams to develop a system capable of processing the rf signals in real-time with a continuous display of the results. Commercial off-the-shelf software-defined radios were employed and loaded with algorithms developed by the lab. A company was contracted to program the processor to speed the data processing while the University’s EDCF (engineering and design core facility) programed the user interface. The resulting effort produced a portable radio system connected to a laptop. The graphical user display showed representative heart rate and respiration rate signals of individuals in the antennas transmission path.

These advances in technology were made possible by the financial support for proof of concept development.  Similar funding has been deployed to efficiently advance nascent technologies in order to derisk future investments.  Further support of this nature can fuel similar developments for other projects.