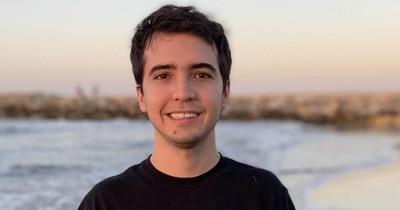 Notre Dame History and Philosophy of Science PhD Candidate, Sebastian Murgueitio Ramírez, has always had a mind for physics, but even more admirably Ramirez has always had a passion for sharing and creating access to knowledge. While pursuing both a PhD in HPS and a Masters degree in Physics himself, Murgueitio Ramírez makes a point of providing resources to other students through the co-founding of STUDIA, an online platform where students can access a rich database of digital-illustrated physics practice problems and step-by-step solutions.

As an undergraduate student at Universidad de los Andes in Bogotá, Colombia, Murgueitio Ramírez studied both physics and philosophy and served as a teaching assistant and as an adjunct professor. This was when he realized just how many students who don’t have strong backgrounds in science were getting left behind in classes that moved quickly without providing textbooks with complete foundational knowledge. Frustrated by the gaps that existed within these textbooks, Murgueitio Ramirez was compelled to write his own.

However, even after Física paso a paso (Step by Step Physics) was published a year and a half ago, Murgueitio Ramírez remained unsatisfied. Murgueitio Ramírez admits, “I’m not sure I like the textbook industry very much and textbooks are very overpriced. I wanted to have more control, more problems, and more diversity in the different topics - I decided to start building a website.” This was when STUDIA was born. Murgueitio Ramírez reached out to a close friend of his, Leonardo Uribe Castano, a PhD candidate in Quantum Biophysics at the University of Toronto, to help develop the website. As he began to seek resources and build a team he also recruited computer science help from an ND undergraduate student, Tarik Brown. When the IDEA Center came on his radar, Murgueitio Ramírez quickly took the opportunity to pitch his idea to the student pipeline. “We were a bit scared,” Murgueitio Ramírez laughs. “I haven’t presented in many years to someone who is not an academic, and I didn’t know what to expect, but then they liked it and it really motivated me to go ahead with the idea.”

This beta version of the STUDIA platform, which was launched recently, is available to students and teachers free of charge. Users make an account and will have access to 40 different problems and solutions across a range of different representative topics for Physics I: “Every prompt and problem is designed by us. They are all original problems we created and that guarantees that they are different [than what is already out there]. As much as possible, we also want to make it fun for the student.” The detailed illustrations (created by Stacy Sivinski, a PhD Candidate in English at ND) and extensive solutions is key to what makes their platform unique: “every equation that is introduced is explained, illustrations are explained - we want everything in the solution to be as clear as possible.”

Murgueitio Ramírez explains that the launch was accelerated in order to meet the timeline of the McCloskey New Ventures Competition in which STUDIA was one of this year’s semi-finalists. Additionally, the early release of the site comes at a time when virtual learning platforms are in higher demand than ever before. Murgueitio Ramírez explains, “zoom classes are just not the same, you are not learning the same as you would learn physically. You cannot go into the same level of detail. STUDIA can try to be your personal TA. It’s an easy way for a professor to offer guidance and suggest that the student practice using STUDIA.”

STUDIA was awarded the College of Science Award at this year’s McCloskey New Venture Competition. Murgueitio Ramírez shares, “it means a lot [to receive this award] because STUDIA is meant to help people in the College of Science.” During finals season, you can access STUDIA here and provide feedback about the platform!