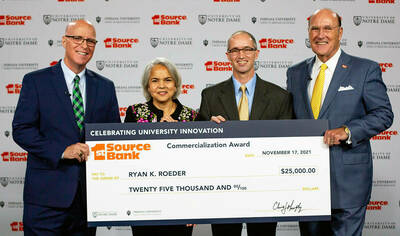 Ryan K. Roeder, professor of aerospace and mechanical engineering at the University of Notre Dame, has been named the first place prize winner of the 1st Source Bank Commercialization Award. Second place was awarded to a team composed of Richard Billo, former associate vice president for research and professor emeritus of computer science and engineering and David Go, professor in the Department of Aerospace and Mechanical Engineering, along with colleagues David Hoelzle, associate professor in the Department of Mechanical and Aerospace Engineering at the Ohio State University and Hao Peng an additive manufacturing evangelist at Siemens PLM Software.

Roeder received the first place award which carries a $25,000 cash prize for developing a new biomaterial platform for orthopaedic implants that improves their integration with bone in order to alleviate pain and reduced quality of life caused by degenerative musculoskeletal diseases, injuries and aging. He invented this technology more than 13 years ago in anticipation of a market need for a more effective material for applications such as spinal fusion implants.

Roeder co-founded HAPPE Spine LLC in 2018 along with the Genesis Innovation Group to commercialize his invention. It is doing this by using an innovative manufacturing process that enables commercial-scale production of its orthopedic implants. He now serves on the company’s board of directors and is their chief technology officer.

“I feel undeserving to have won this award when so many others have given their time and talent to this endeavor, including graduate and undergraduate researchers at Notre Dame, the HAPPE management and engineering teams, business partners, investors, consultants, clinical advisors and more,” said Roeder. “Although we still have much to do, I am hopeful for our future because I know how far we’ve already come due to hard work, persistence and some serendipitous, perhaps even providential, help along the way.”

Billo, Go, Hoelzle and Peng were awarded a $10,000 cash prize for winning second place. They developed the software program Sunata which is a predictive modeling software tool for additive manufacturing designed to minimize the distortion of metal parts as they are printed. The goal for Sunata is to reduce the time and cost of producing a 3D printed metal part while also improving its quality.

Sunata was licensed to ITAMCO, which then formed Atlas 3D. Atlas 3D then made a successful commercial product of Sunata and was eventually sold to Siemens.

“Our team is both honored and humbled to receive the 1st Source Bank’s Commercialization Award,” said Billo. “Sonata is an example of what can be achieved when the government, Notre Dame researchers and companies come together to develop and commercialize new technology for American industry. Our Notre Dame team would especially like to thank America Makes, ITAMCO, Johnson & Johnson and the University of Pittsburgh for their tireless contributions to ensure the successful development of the technology that underlies the Sonata product.”

Established in 2008 with a $1 million gift from 1st Source Bank, the commercialization award is presented annually to faculty from Notre Dame or the Indiana University School of Medicine-South Bend who have successfully transitioned their technologies from the lab to the marketplace.