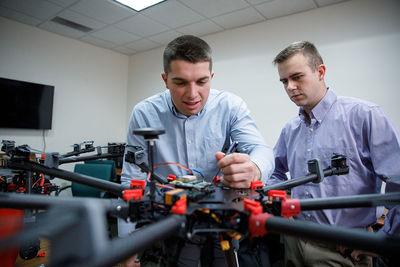 Notre Dame undergraduates Nathaniel Hanson, left, and Zachary Kousens, right, work on an octocopter drone that they hope will soon be able to deliver defibrillators to cardiac arrest emergency situations so bystanders can save lives before rescue workers arrive.

A class project in Computer Science at the University of Notre Dame is going beyond the classroom as a prospective new student startup company. The project, now called DeLive, is designed to deliver defibrillators by drone to emergencies so bystanders can save lives before rescue workers arrive.

Notre Dame undergraduates Zachary Kousens and Nathaniel Hanson pursued creating a company from their project when they saw the interest of the South Bend Fire Department and EMS professionals at a demonstration of the work they did for Jane Cleland-Huang, professor of software engineering at Notre Dame and a drone researcher who became their mentor.

“The idea is when someone has sudden cardiac arrest and a bystander calls 911 and an EMT responds, help typically takes 10 minutes to get to the scene,” Hanson said. “We can get an automatic defibrillator there within two minutes using a drone,” dispatched by the 911 operator who finds a landing site using Google maps. This, says Kousens and Hanson, should boost the survival chance of those in cardiac arrest from 10 percent to 40 percent.

Kousens, a senior and a computer science major, and Hanson, a senior and a computer engineering major, have been friends since their freshman year and chose to take Cleland-Huang’s class together as juniors. She proposed the project to the class because she knew South Bend’s fire and rescue workers were seeking drone-based solutions to medical equipment delivery.

“Nathaniel and I started out in this class together, software engineering for unmanned aerial systems,” Kousens said. “We were learning how to write simple programs that could be used to fly quadcopters around. When it came time to choose a final project, this was an idea that interested both of us. The professor had been working with the South Bend Fire Department on river rescue system using drones for people who fall in the St. Joseph River.” 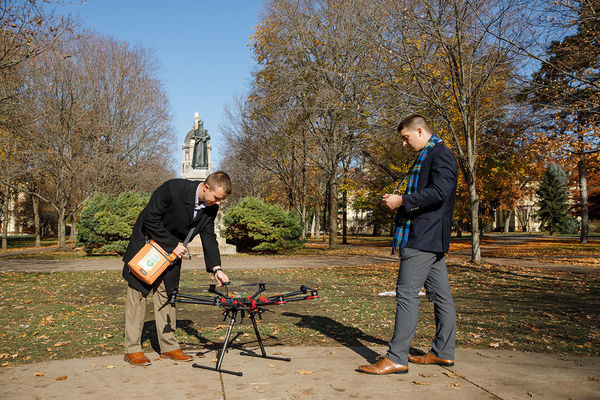 “We just kind of sat down and thought about different ways we could do drone delivery, things you could deliver. It sprang up organically,” said Hanson, who started building drones when he was a high school sophomore. Instead of pizza or packages, they wondered, “What if we could deliver something more meaningful and important?”

“Zach and Nathaniel wanted to work on something that was real-life,” Cleland-Huang said. “They were the right people to do it. They’re both very skilled. They’re really good problem-solvers. By the end of the semester, I thought it was a great half-semester project, but they’ve put a lot more time and effort into it.”

The founders start with an off-the-shelf carbon fiber octocopter frame, typically used for filming, and customize it to make it more robust. They’ve coded custom proprietary software for the application, pathfinding and routing algorithms in addition to enhancing the hardware design.

“We focus more on the technical development side,” Hanson said. “We wanted to build a minimum viable product. If it looked like there was enough market interest, we would become a company and see where it goes.”

Cleland-Huang loaned them drones so they could continue their work over the summer of 2018. Experts from the Department of Electrical Engineering are helping with some communications issues. The Cardiac Science company loaned a defibrillator and Jane Wyngaard, a data scientist at Notre Dame’s Center for Research Computing, helped with the complex hardware issues.

“I was impressed by their motivation,” Wyngaard said. “It's great to see students take what they learn and immediately run with it.”

DeLive received mentoring from The IDEA Center and a grant this fall that enabled them to buy a larger drone and equipment that adds power and safety to the device.

“The IDEA Center’s been really great,” Hanson said. “Zach and I are both engineers. We’re not business majors, so we don’t have a lot of the business knowledge and background to make this a full-fledged company. They were shocked to see that we had a prototype built. They saw the potential almost immediately, and they were super gung-ho to give us some funding to get us a second prototype and connect us with others who had done the process of starting up a business before.”

The second prototype included extensive modifications for mounting, carrying and releasing the defibrillator. Now they’re working on moving from a radio signal with a 1-kilometer range to an LTE signal with unlimited range based on cell signals as well as adding safety systems that will qualify the drone to fly longer distances beyond the line of sight. Hanson is working a team on his major’s capstone project that will help develop the technology.

The delivery technology can be extended to other medical equipment and supplies, such as EpiPens for allergic reactions and Naloxone for opioid overdoses, but Kousens and Hanson started with the heavier defibrillators to ensure that the equipment is sufficiently robust for heavier items. It is capable of flying in most of the weather conditions in which an airplane would be allowed to take off.

The drones can be stored and launched from small stations on roofs, in parking lots, or along roadsides. An operator who is logged into the system can find the caller’s location, get a view of the ground to choose a landing site and arm and launch the drone in 15 seconds.

While the product could be used in rural or urban settings, South Bend offers the ideal market – a medium-sized municipality surrounded by a large rural area that needs faster emergency response times. The equipment could be used to overcome traffic congestion in large cities that hinders emergency vehicles, but FAA regulations are stricter for drones in such population centers.

Kousens and Hanson are collaborating with South Bend emergency officials on development, with sessions on Notre Dame’s White Field where they are known as the “drone kids.” Officials from other services, including an EMS director from Kentucky who heard about DeLive on a visit to Notre Dame, are clamoring for the equipment: “How fast can you get this to us?” was his question to the duo.

The life-saving application aligns with the business “triple bottom line” – social and environmental as well as financial profit – that Kousens learned in a computing-based entrepreneurship class last year where alumni who are successful technology entrepreneurs emphasized Notre Dame’s mission to be a force for good in the world. 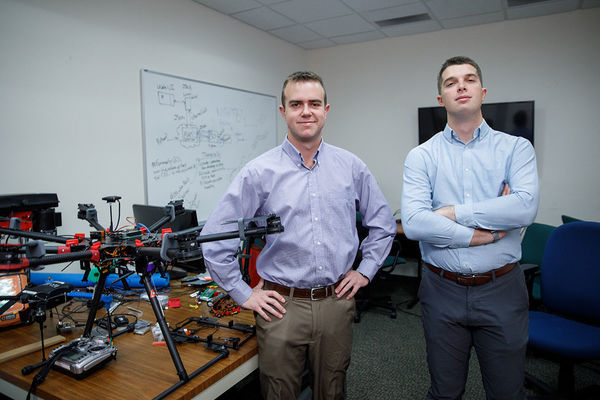 Zachary Kousens, left, and Nathaniel Hanson, right, with their octocopter at Notre Dame

“If there was one common theme among all of them, it was that their main focus wasn’t the financial return,” Kousens said. “It was the impact they would have. No matter what their product was, they also focused on the societal good they were doing with that. That made me realize what I wanted in a career. It’s such a common theme among the Notre Dame family. That theme has driven this idea forward and brought more meaning than just a financial reward.”

Kousens will enter Air Force flight school after he graduates in May, on his way to becoming a pilot. Hanson is considering returning to Notre Dame for a master’s degree in computer science or the ESTEEM entrepreneurship master’s program.

They expect to advance the commercialization of DeLive.

“I’m looking for something more fulfilling,” Hanson said. “I kind of see that in this project. I hope we can get it to the point that it gets to be something viable for us to continue full time.”