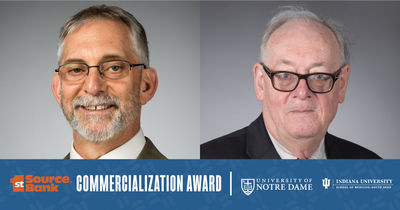 That’s how Jay Brockman felt as he watched his fellow graduates head to Silicon Valley after earning doctorates from Carnegie Mellon University. It was 1992; the West Coast startup scene was just heating up. Despite an appreciation for entrepreneurship, Brockman wasn’t going to California. He was going to Notre Dame to teach.

For this achievement, Brockman and Kogge, the Ted H. Courtney Professor of Computer Science and Engineering, were the inaugural recipients of the $20,000 1st Source Bank Commercialization Award in 2011. The award was established with a $1 million gift from 1st Source Bank to honor faculty from Notre Dame for successfully transitioning their technology from the lab to the marketplace.

Brockman smiles at the memory. “When we founded Emu in 2008, we literally started the company on a dining room table with funding from our own pockets—not enough to jeopardize our own kids’ college however! At the time, Notre Dame had very few support services like there are now through the IDEA Center. We had to cut our own path.”

In November 2009, Emu moved to Notre Dame’s Innovation Park as one of the first tenants. Brockman says it was a good thing, too. “We needed our dining table for Thanksgiving!”

With this support and their own business experience—Kogge worked with IBM for 26 years and Brockman worked with Intel—Emu gained traction based on their patented computing platform’s ability to process massive amounts of sparse data in real time, something that's not possible with conventional computing.  The technology, dubbed the Emu Chick, is essential to applications like threat intelligence, fraud detection, artificial intelligence and personalized medicine that rely on sparse data.

In November 2017, Emu completed a $5 million Series A-2 fundraising round with new and previous investors, including IrishAngels and Blu Ventures. The intent was to accelerate Emu’s growth. With Notre Dame’s blessing, Brockman and Kogge took a two-year sabbatical from teaching to focus on Emu. Even so, Kogge says the two were cognizant of the need for a proper relationship between company activities and campus duties. “We knew we’d return to teaching,” he says.

At this point, Brockman and Kogge were ten years into their "startup" and realized it was time for a major change. That change came in the form of serial tech entrepreneur Michael Maulick, who joined Emu in mid 2018 as chairman and CEO. Maulick had previously served as CEO of four international technology firms and had experience selling companies to IBM, EMC and Globalware.

The new CEO was tasked with “productizing” Emu’s technology. Says Maulick, “All of the pieces were groundbreaking; however, we needed to step back and put it together for commercial markets. This was critically important because Emu’s technology is radically different from traditional computing, making adoption more challenging.”

For the last year, Emu Technology has been in stealth mode fine-tuning its offerings and working closely with a government sponsor. In October, the company re-launched with a new name: Lucata. They are now offering an end-to-end hardware system for hybrid database environments that solves challenges associated with big data computing, artificial intelligence and machine learning.

Looking back at his decision to join Notre Dame over Silicon Valley, Brockman feels nothing but satisfaction. “Founding Emu Technology and winning the 1st Source Bank Commercialization Award changed my career at Notre Dame and my life. Before Peter and I started Emu, there was skepticism that faculty could start companies. We demonstrated that Notre Dame faculty could also be successful business people.”

Kogge concurs that Emu has had a positive impact on his life and his students. “This experience has enabled me to land multiple research grants in areas I would have not known about without my Emu-gained insights. This includes looking several generations ahead into how some of the technologies underlying Emu may be adaptable to entirely different problem areas that my grad students are beginning to explore. That is very satisfying.”