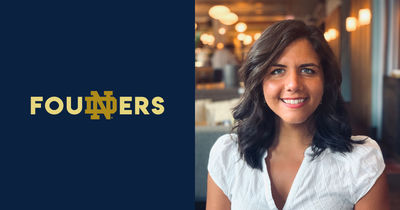 Daniela Tomas always thought she’d go into international business, an homage to her beloved father who was an entrepreneur in Croatia and who passed away when she was just 13.

“My father built a luxury yacht and took tourists from all over the world on cruises on the Adriatic. He was the captain, host, marketer; he did it all. I put him on a pedestal,” she says.

Encouraged and supported by her hard-working mother, Tomas carried her dream to the University of Notre Dame. She had every intention of following in her father’s footsteps in international business until she got involved with Notre Dame’s Center for Social Concerns. “I volunteered to go to Albuquerque, New Mexico, and worked at a homeless center. They were in the process of starting a training program at an on-site cafe to give people experience and then place them in the restaurant industry. One of the things I did was write a business plan for them. This purposeful work spoke to me,” she explains.

Returning to Notre Dame, she fueled her new-found interest by taking a course—and then others—in social entrepreneurship. For her capstone project, Tomas created a business plan applying what she learned at the New Mexico homeless center to South Bend. The idea was to open a coffee shop at the airport that provided  training and jobs to the area’s homeless and refreshment to the steady flow of students, visitors and businesspeople who had few options.

Dreams take time to realize. As graduation closed in, Tomas saw no immediate opportunity in her chosen path. Instead, she applied for and secured a two-year Orr Fellowship, a program named for former Indiana Governor Bob Orr designed to stop the “brain drain” from Indiana’s universities to other states by developing future business leaders and entrepreneurs. One unique aspect of the Orr Fellowship program is that it pairs the 50 fellows chosen each year with a host company. Tomas was paired with Indianapolis-based Angie’s List, which at the time was a high flying aggregator of home repair services.

Tomas explains the welcome she and other fellows received from Angie Hicks, for whom the company is named. “She was very clear with us, saying, ‘As an Orr Fellow, we put you on a pedestal and shine a spotlight on you. It’s up to you whether we see you soar or see you fail.’”

Undeterred, Tomas welcomed the challenge. Angie’s list had just completed a successful initial public offering and the atmosphere at their headquarters was “super energetic and exciting.”.

“I  was placed with a team working on external sales strategies. My boss let me take a stab at a lot of strategic initiatives. It was like running a business within a business which was huge for a 22-year-old,” she says. “Later, I had a female executive as  a mentor who continued to teach and guide me.”

On October 2, 2017, HomeAdvisor acquired Angie's List, renaming the combined company ANGI Homeservices and becoming  the world's largest digital marketplace for home services. Not knowing how the acquisition would impact them, Tomas and her colleague wondered what the company would look like with a different approach. Their thesis was to replace to replace the one-off scheduling of a service provider  (the Angie’s List model) with aggregated service requests in a hyperlocal place such as a neighborhood.  “We believed the many to one model as a better approach,” she says. “If a handyman could come see five customers in one neighborhood, that would be better than seeing one at a time. Think of the savings on commute times. ”

The idea resonated and in 2017, Tomas co-founded DwellSocial with Angie’s List colleague Allen Shulman and Michael Cerna, an early developer at Groupon. The trio raised pre-seed money from friends and family, launched a website, and discovered just how difficult it was to organize different services and needs on a single platform. Tomas calls the first two years in business as “difficult to gain traction.”

A turning point came when DwellSocial joined the 2019 cohort of TechStars Atlanta, an experience that helped gel their value proposition of aggregating demand for home projects and services, sourcing professional referrals, and then leveraging the power of groups to negotiate competitive bids with group discounts. The Dwell Social team walked away with some additional funding and, as Tomas says, “We were off to the races.”

And then, they weren’t. Blame fell squarely on the COVID-19 pandemic. Says Tomas, “People were uncomfortable having contractors they didn’t know in their homes. The opportunity in home services came to a standstill.”

The strength of successful entrepreneurs lies in solving real problems in the marketplace and Tomas’ co-founder, Allen Shulman, saw something in the shutdown. Why not apply DwellSocial’s mantra of many to one to Chicagoland’s hurting restaurants?

“Allen reached out to local restaurants with the idea promoting them on our platform. First, we tried local favorites on the North Shore, and then started bringing brands from the city out to the suburbs. One of the restaurants was Pequod’s Pizza, which has iconic deep dish Chicago-style pizza. They were interested, but said they’d only go to one drop-off point. He also approached another local favorite, Francesca’s, and they agreed to do it. We promoted the offers on social media and people were immediately interested. Food took off much more quickly than home services,” Tomas says.

With 13 times the interest in food opportunities than home services, DwellSocial followed the data and pivoted. Any food category was fair game: pizza, fine dining, donuts, tacos—as long as there was enough interest from suburban neighborhoods to support an individual restaurant. Restaurants setting both their menus and threshold for participation. For some it was ten orders, for another, 100.

As the new focus matured, the DwellSocial team built more structure around their offering. For example, they would gauge interest in a particular restaurant or bakery by “teasing” followers on social media by asking them about a specific restaurant, what they’d like to eat and what zip code they lived in. This helped focus favorite restaurants by hyperlocal demand.

With more restaurants joining the platform, DwellSocial began publishing a monthly calendar of listing where restaurants would be and when. Those interested had to reserve a spot to guarantee the delivery of their order.

The model was and remains very different from UberEats, DoorDash and GrubHub, which satisfy one order per delivery, and GoldBelly, which ships restaurant meals to individual customers. DwellSocial is a community catering platform that leverages the efficiencies of hyperlocal group buying to empower restaurants to bring their food almost anywhere in any metropolitan area without relying on third party delivery platforms.

What excited Tomas was how quickly suburbanites embraced the concept. “People are elated to get sushi from Sushi San, Honey Butter Fried Chicken, Firecakes Donuts, and iconic desserts from Sweet Mandy B’s. We found we had a very hungry market.”

Chicago’s downtown restaurants also loved the concept. Legendary chef Rick Bayless credits DwellSocial for keeping his restaurant Frontera Grill afloat during the height of the pandemic. In January, Bayless was doing two suburban drop-offs per week, with upwards of 150 orders per trip. Sweetening the DwellSocial service for Bayless was the ability to utilize his kitchens in off-peak hours to prepare and pack high-volume orders. Like other restaurants on the platform, most meals are delivered ready to finish in the customers’ kitchen. An example is baking a pizza or reheating an Italian dish.

Says Tomas, “Our customers have been so appreciative of the opportunity to enjoy amazing restaurant brands in the comfort of their homes. There’s no driving into the city to get what they want and there’s also the satisfaction of supporting Chicago’s iconic restaurants.”

The pivot has not been without a few challenges, one of which was what to charge. In the early days, DwellSocial simply asked customers for a donation. They now charge customers $5 to reserve a spot to get their desired downtown eats brought to them. DwellSocial is contemplating other revenue streams such as charging participating restaurants a modest fee.

Now with more than 60 restaurants on the platform, a user base of 23,000 as of March  and 40 percent month-over-month growth for the last ten months, DwellSocial has some growing pains. They are currently raising a seed round which they hope to close at $1.25-1.5 million. These funds will be critical to scaling the business and bringing additional team members on board. Currently, DwellSocial is desktop based so an app is also on the to-do list as 70 percent of their traffic is mobile.

Tomas smiles at the rapid progress DwellSocial has made, but admits the team is “grinding it,” working 60 to 80 hours a week. They are mindful about dictating the entire experience and continue to adjust based on experience and feedback. This attention to customer experience is paying huge dividends. DwellSocial’s net promoter score is 81. “A good score is 20 to 30, Above 70 is unheard of. This proves people love the concept.”

Tomas says while the focus now is to continue to grow in Chicago and upgrade the platform, the team hopes to expand into new geographics by year end. With restaurants slowly opening up, the question is will consumers continue to patronize DwellSocial?

“COVID exposed the need and consumers and restaurants love the platform. Does it have legs? I think so. Traffic, parking and all of the other hassles will remain. DwellSocial makes it really easy to enjoy what you crave,” she says and then reveals her personal fav: Sweet Mandy B’s cupcakes.

In helping connect hurting restaurants with hungry consumers and keeping thousands employed in the process, it seems that Tomas has achieved her dream of being a social entrepreneur. In truth, her journey has just begun. Looking ahead she offers this advice to other entrepreneurs:

“Stay resilient. There will be many more ‘no's’ than ‘yes's’ and more products and features that fail than thrive but building something brand new that people love is an incredible rollercoaster."