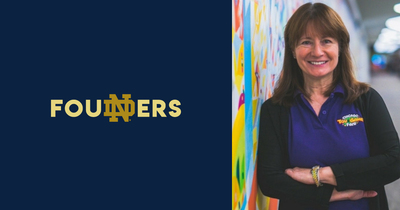 One of Mary Couzin’s fondest childhood memories involves family card games. When her mother, aunts, and uncles would gather around a table and play poker, she and her cousins would huddle under the table and wait.

“Every so often the adults would drop pennies and nickels to us, which was followed by a small skirmish by us kids. We loved poker night,” she recalls.

Years later, Couzin is still playing games, but as the founder and CEO of Chicago Toy & Game Group. She also invents games, owns one of the largest toy and game shows in North America, collaborates with the industry’s CEOs, writes about toys and games, and encourages people of all ages to play and create their own toys and games.

She smiles at her career path, which she says, was pretty “normal” until she reached her forties and found her true passion. Truth is, Couzin has always been a pioneer, quietly bucking the system.

“It started with college,” she explains. “My father was a Notre Dame graduate. In the 1970s, the university finally allowed women to attend. My father was totally against the idea and didn’t encourage me to apply. I said to myself, ‘I’ll show him!’” Couzin was accepted in the Notre Dame Class of 1980 and off to South Bend she went.

After graduation, Couzin had a series of jobs, none of which inspired her. She eventually worked for a real estate brokerage and development company in Chicago for 22 years. While it wasn’t a creative job, she enjoyed it. It also gave her the  flexibility she needed while raising her two children. Then, one day, something sparked her interest.

“A classmate from Notre Dame worked for a toy company in  Racine, Wisconsin . He would bring prototypes of toys and games  to play on weekends and tell stories about the inventors. I found the idea of inventing and  licensing games and toys to companies fascinating. I thought, I can do that!” she says.

As Couzin got into inventing her own games as a side hustle, she discovered it was a lot harder than she thought. Companies weren’t just waiting to buy her creations. So she did what some toy and game inventors do, she self-produced some board and card games. To her delight, she found she had a knack for it. In 1994, a game she co-invented with a colleague called Hollywood’s Reel Scheel, was awarded one of the Top Five Games of the Year by the Chicago Tribune.

The win fanned her passion and she started helping other inventors find their way. Information was difficult for them to find since the Internet was not widely used back then. Every vacation she had at her day job was spent traveling to toy and game trade shows around the world, including the Essen Game Fair in Germany. “Essen was different from the toy trade shows in the United States. It is hosted for  consumers to come and meet inventors, interact with the toys and games, and have fun. I said to myself, ‘We need this in the United States.’”

On her return to Chicago, Couzin decided to go big. The year was 2002. “At this point in my life, I had never hosted anything bigger than Thanksgiving dinner,” she laughs. “What did I do? I rented  the exhibition hall at Navy Pier for the first ever Chicago Toy & Game Fair.”

The first challenge she faced was how to attract families to the event. Between the zoos, museums, parks and various professional sports teams, Chicago has a lot to keep families entertained. Knowing she couldn’t play around, Couzin decided to invite one of the most famous game inventors to the show as her headliner and encourage people to come meet him. “I lined up Reuben Klamer, who invented the modern version of the Game of Life along with roughly 200 other games and toys. He was a real super star. People were lined up out the doors of the hall to meet him,” Couzin says.

The public’s fascination with toy and game inventors became Couzin’s recipe for success. Later shows would feature industry superstars like Eddy Goldfarb, the creator of more than 800 toys and games including KerPlunk, Shark Attack, chattering teeth, and bubble guns, as well as Leslie Scott, who invented Jenga. The Chicago Toy & Game Fair became a local favorite among families and politicians like former Mayor Richard Daley, who always made a point of attending.

Today, the Chicago Toy & Game Week, which is held the weekend before Thanksgiving, is the largest public toy and game fair in North America for families, spanning four days and two festival halls at Navy Pier. The event is popular with kids, families, inventors, media, and toy and game companies. Couzin likes to call it the “biggest and most effective focus group anywhere” as industry executives can see firsthand how people interact with their products while the media sees what’s hot for the holidays.

Like most inventors, Couzin likes to tinker and try new ideas and after inventing a card game with her then fourth grade daughter, she recognized just how much kids enjoy coming up with their own games. Wanting to support the future of the industry, she launched the Young Inventors Challenge in 2006. “The mission is to inspire the next generation of inventors to use creativity, critical thinking, and STEAM skills in the invention and innovation process,” she explains. “We also connect kids to professionals within the toy and game industry to mentor them in their design process.”

​The Young Inventor Challenge is open to kids ages six to 18 and is the only program that has sponsorship and mentoring participation from top toy and game manufacturers around the world. Says Couzin, “It’s a high for kid inventors. We’ve had dozens of kids license their games to toy companies and get on shelves with Target and other stores. It’s also great for the toy executives and product acquisition executives. They love talking with and helping the kids.”

She says a number of participants who licensed games have used their earnings to fund their college tuition. One boy who won the competition  twice  went on to work with Spin Master, the third largest toy and game maker in North America. “We’ve made a difference in a lot of lives,” Couzin says.

When the global pandemic struck in spring 2020 and people were locked down at home, the toy and game industry benefitted from a surge in interest in traditional board games, card games and digital games. But the pandemic also shut down all of the big toy shows around the world, including the Chicago Toy & Game Fair for two years. During this time, Couzin concepted an exciting new digital experience and ultimately rebranded her company as People of Play—POP for short.

Creating a new, interactive website with levels of engagement for the public and industry would be no small task, not to mention expensive. Up until this point, Couzin had self-funded her company with her real estate job and with what she terms “Legos, shoestrings and Silly Putty.” She had an office in 1871, Chicago’s Technology and Entrepreneurship Center and had deep relationships there but was having trouble getting funding for PeopleofPlay.com. She also wasn’t quite sure how to develop the site, which would also offer free and paid access.

What eventually happened was kismet. Couzin met an Australian woman, Supriya Perera, a UX designer living temporarily in Chicago without a work visa and couldn’t have a paid job. Perera believed in what Couzin was doing and volunteered to help with the in-person events and get PeopleofPlay.com off the ground. She ultimately played a pivotal role in developing and bringing the site to life.

In fall 2020, Couzin soft launched PeopleofPlay.com. Eight months later, she broadened the base to everyone in the toy and game industry, and soon to all people of play. The site has been a huge success and is the place where people in the industry can meet consumers. While the in-person Chicago Toy & Game Week some 30,000 attendees from 25 countries, the website gets nearly 10,000 views per month (and growing) from 105 countries. Users are attracted by  the site’s rich content, Leaders and Legends video series, blogs, and ability to browse by people, companies, toys, games, and brands. Users can also customize their experience with paid membership.

Still not finished in her quest to connect, collaborate, advance, and play with the toy and game industry, Couzin acquired The Bloom Report, the industry’s largest amalgamator of toy and game news, from its founder, Phil Bloom, in 2021. Bloom, a retired Toys R Us executive, founded the newsletter in 1997, and is highly regarded in the industry.

Couzin still cannot believe her good fortune in taking over The Bloom Report from a man who is in the Toy Hall of Fame in Rochester, New York. “It’s such an honor as Phil chose me. In many ways, it was a passing of the baton, and he recognized my passion for  the industry and laying the groundwork for the future.”

Although everything has come together in Couzin’s world of fun and games, holding everything together over the last 20 years has been her biggest challenge. She works hard on focusing on what works, being mindful about keeping what is successful and letting go of things that aren’t. She also has an executive committee and an advisory board to lean on and help with financial side of the business.

Her biggest win, she says, are the friendships she has made throughout the industry, media, and consumers worldwide who enjoy toys and games. “I just love these people. Play brings people closer together. I want everyone to have that sense of fun in their lives and tell the stories behind their favorite toys and games.

Couzin’s advice to those who want to start a company, an event or a movement: “Don’t be afraid, just do it. No matter what your age. I love what I do. It just took a long time to get here.”