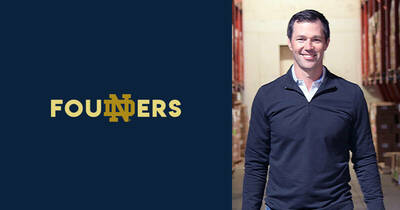 Not too many kids grow up playing hide and seek in a cheese factory among the slicing, dicing and shredding machines. Or have a grandfather who originated the idea of selling pre-sliced and pre-shredded cheese. Or whose father was responsible for supplying major grocery stores across the country with cheese. But for Josh Gentine, this was just life as a third-generation member of a cheese-making family in Plymouth, Wisconsin.

“I remember my grandfather, who founded Sargento in 1953, walking through the factory, cigarette in his mouth, fixing equipment, checking on production. His nickname was ‘The Big Cheese’ and he was,” Gentine recalls fondly. “He was always thinking of ways to make cheese better and easier for consumers to eat. He was a true marketer and entrepreneur.”

By the 1990s, Gentine’s uncle was Sargento’s CEO, while his father oversaw the retail business and other uncle ran the foodservice business. Josh Gentine and his identical twin brother Jon were encouraged to join Sargento, but before that, it was assumed both would attend the University of Notre Dame.

“Notre Dame is kind of a family thing,” Gentine admits. “But it wasn’t until I saw the movie Rudy that I was hooked. I wanted to play football for the Irish, so I funneled all of my actions, sports and academics, toward attending Notre Dame.”

During high school, Gentine played quarterback, kicker and punter. His brother played wide receiver and holder. Both were accepted into Notre Dame in 1999. That fall, Gentine earned a walk-on spot on the Irish football team as a back-up punter. His brother followed his lead, walking on in the spring as a wide receiver and holder. Asked who got more playing time, Gentine has a simple answer: “Jon had more Rudy in him than me.”

Football wasn’t the only thing on Gentine’s plate during his Notre Dame years, however. “I did all the right things to go back to Sargento. I majored in Finance and did all of the leadership stuff. But it never felt like the right glove to me.”

That’s because most people saw one side of Gentine, the football player who was in student government, studying and making friends. There was another side to him, a quiet side, a thoughtful side. And that side had a calling other than cheese. “I always had an inkling I had a calling to the priesthood.”

Graduating in 2003, Gentine was at a crossroads with no decision in sight. Instead of jumping into a career, he took a year off to volunteer in the Galapagos Islands and in Tanzania at a hospital. When he returned to the States, he spent a year-and-a-half volunteering with the United Way.

In 2006, his entrepreneurial roots took hold and Gentine founded Press Cocktail Soda. After a few years, He sold his stake to his partners and used the proceeds to start a chocolate venture, The Cholive Company. “It was a hot mess,” he says. When the bottom fell out of the economy, he shut the company down in 2011 and started on a new path.

“I decided to explore my calling to the priesthood and applied to the Notre Dame Seminary. They turned me down and suggested I come back in a year,” he explains. “I didn’t want to waste the time waiting so I became a full-time MBA student at the University of North Carolina in Chapel Hill. I thought I could use what I learned as a priest.”

During his final year of the MBA program, Gentine was recruited by Deloitte and was offered a position. He told them no, he was going to seminary. “They’d never heard that before! But they took it well,” he says.

Returning to South Bend, Gentine entered the Graduate School of Theology with the intention of answering his spiritual calling. “I loved the experience of my first year of seminary. But as I approached the second year, a year of solitude, I had a holy sh*#! moment when God told me it was time to go. I wasn’t meant to be a priest.”

When he dropped out of seminary, Gentine called Deloitte back. They immediately hired him for their Washington D.C. office to work in Human Capital in mergers and acquisitions. Over the next four years, he helped build Deloitte’s global talent operations. Little did he know, he was laying a very solid foundation for returning to his first calling.

In January 2018, Gentine joined the Sargento board of directors, giving him even more insight into the family business he’d grown up in.  That experience, coupled with his years at Deloitte, contributed to his starting Bench Consulting in 2019, a boutique consulting firm. There, he focuses on helping family-owned companies navigate the issue of selling their businesses or keeping them in the family. And, if they did decide to hold on, how to continue with the new generations of families. “I really feel like a pastor,” he says. “Family businesses are so personal. Often the younger generations don’t have the passion of the founder so next steps are difficult. Much of what I do is helping families decide on a path and next generation governance.”

This could have been the end of Gentine’s FouNDer’s story, but this former Irish football player likes calling his own plays, and trick ones at that. In August 2020, he got a call from a friend in Wisconsin who runs a cold storage warehouse. The fellow had a million pounds of aged sharp cheddar and needed to sell it. Could Gentine help?

“I know the grocery business, so I told him I’d call a few grocery stores. No takers. I came up with a new angle. I approached the broker who defaulted on the cheese purchase and said I wouldn’t buy the entire inventory, but I would partner with him on a new company. He said yes.”

Thus, in November 2020, Gentine’s life came full circle when he became the founder of The Big Cheese Company, a business-to-consumer gourmet food company specializing in big blocks of 13-year aged cheddar cheese, from 2.5-pound bricks to 40-pound behemoths. He laughs at the irony of himself “slinging cheese” for a living. (Bench remains his “day job.”)

“Launching an online food company during COVID was the best of times and the worst of times,” he says. “On the bright side, people were at home, cooking more and ordering food online. The reality was the cost of customer acquisition was and is extremely high.”

The Big Cheese is not your parents’ cheese company; it’s next gen cheese, more charcuterie board than mac and cheese. Gentine cut his creative side loose when developing the company’s persona and website, using humor and puns to differentiate the brand. He enlisted a public relations firm and an ad agency to help launch and drive website traffic. The initial focus was social media and connecting with celebrities and other food influencers with gifts of big cheese.

“Our most impressive celebrity endorser win to date was with comedian Jim Gaffigan. We sent him some cheese and he loved it. He then posted about it on Instagram. Later he posted something about trying to find the perfect cheesy gift for his wife for Valentine’s Day, so we carved a block of cheese into his likeness and sent it to him. It was a big hit,” he says.

Paying influencers can eat up a startup’s budget pretty quickly. Gentine deployed another tactic which was attending and selling at holiday markets in Boston, Philadelphia, and Washington D.C. where people could sample the gourmet cheddar. The Big Cheese Company proved very popular and enabled Gentine to start building a database of customers. Eighteen months into the new venture, he’s discovered that 40 percent of sales are to repeat customers.

“We need a passionate user base; however, cultivating customers is slow work. Humor, creative social campaigns, eblasts, and excellent cheese are helping us build a following. This is definitely a long game,” he says.

To mix it up, The Big Cheese Company has added gourmet white and golden cheese popcorn to its product mix. Gentine is exploring other line extensions such as a cheddar spread and possibly gouda and other cheddars. Because of strong repeat business, he may start offering subscriptions, sending cheese and cheese popcorn on a monthly basis to subscribers. Eventually, Gentine would like to sell to gourmet supermarkets and specialty stores. He is very optimistic about the Big Cheese Company’s future:

“When someone tries the cheese, they discover how much they love it. It’s great cheese.”

Gentine’s advice to those who want to start a company regardless is this: “Once you start, don’t stop. Be resourceful. There will be a thousand reasons why it shouldn’t work. Keep going and ultimately you will find the product market fit.”