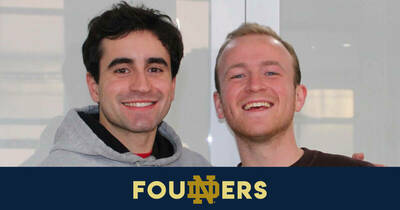 It was Welcome Weekend 2014 when the Duncan Hall freshman class was taking a jog around campus at the University of Notre Dame, when Max Towey overheard another runner crack an exceptionally good joke as they passed the Golden Dome. “It made me laugh; I thought here’s someone I might want to get to know.”

Turns out, the jokester was Billy Carney. He lived down the hall from Towey in Duncan. “It was inevitable that we would meet,” Carney says dryly. “We let Max in the back door to our friend group.”

Good thing, too. It didn’t take long for Towey and Carney to become best friends who shared a passion for entrepreneurship. “We knew from the beginning we wanted to start a business together,” explains Towey. “We were always batting around ideas, a lot of them pretty stupid.”

During one holiday break, the two were in Naples, Florida, celebrating New Year’s Eve with some champagne on the beach. It was then the ideas really began to flow. A grocery delivery business. Oops, no. Someone else was doing that. A social media platform where people could find pickup games or others who shared the same hobbies. Nah. Facebook Groups had that covered. What about something in the news arena? Well, that comes later.

After graduation, Towey headed for Washington, DC, where he’d landed a position in corporate relations for the American Enterprise Institute, a think tank. One of his responsibilities was to co-host a podcast called Banter. “Despite being a voracious reader of news this was my first real foray into media. It was incredibly valuable. I met people who are my mentors to this day and a uniquely smart and ambitious colleague, Max Frost, who also dreamed of being an entrepreneur.”

Meanwhile, Carney decided on Wall Street, joining Bank of America Merrill Lynch as an investment banking analyst. A lifelong gamer, he was not a consumer of legacy news unless forced. “If I was at the barber ship and it was on, I’d watch.”

The friend group, which now included Frost, continued to share ideas about startups. In early 2020, the global pandemic struck, and the mainstream media’s tone and reporting reached in a new high in alarmism. Towey and Carney were increasingly frustrated with the negative spin and extremism. Sensing an opportunity, Towey and Frost came up with an idea for an alternative news company. Towey immediately looped in Carney to get his advice and ultimately turn their dream of starting a company into a reality.

Says Towey, “Only 28 percent of adults in the United States trust the media. Our generation, Millennials and Gen Zs, are totally tuning out because they feel manipulated. So most young people get their news as background noise. We thought, ‘What if news was enjoyable, digestible and trustworthy? What if there was no agenda, no corporate motive, and news was delivered direct to the consumer?’”

Carney continues. “We decided to start a movement to transform the news experience and engage younger generations.”  RocaNews was born in August 2020 with Towey as CEO, Carney as chairman and Frost as president.

The co-founders left their day jobs to pursue their new venture full-time. Despite the risk, they had complete buy-in from their families. Says Towey, “Our families and our friends wholeheartedly support our ambitions and dreams. It’s something we never take for granted. “

“They admire our gutsiness,” smiles Carney.

About the name…Roca is short for Pororoca, a biannual wave that sweeps the Amazon River. The name is thought to come from the indigenous Tupi language and translates as “great roar.” Surfers converge from around the world to surf the Pororoca. It’s a wave that brings people together. That’s Roca’s mission with the new: come ride the wave with us on this new news platform.

“Our vision was a platform where content is curated by what people, consumers of news, want to know not by people who tell you what to know,” Towey says. “Also, we wanted to make news fun and enjoyable again.”

Carney adds, “And we want to be at the top of their feed.”

For the first 13 months, RocaNews consisted of Towey, Carney and Frost. They worked working tirelessly doing everything themselves. This included successfully raising a pre-seed round of nearly $500,000, largely from angel investors, the Notre Dame alumni network and business connections.  “Our early investors took a leap of faith betting on us and the opportunity we identified. That really motivated us,” Towey says. “Meanwhile, we paid ourselves less than minimum wage to show that we were 100 percent committed.”

RocaNews was originally launched as website but that wasn’t working. Attracting followers was too difficult. Carney was brutally honest with his co-founders. “We were wasting our time and our resources. We needed to go where our audience was and that was Instagram,” he says.

Unless you’re a celebrity or professional athlete, it’s very difficult to scale a large following on any social media channel. While some will literally buy a following, RocaNews had to grow its fan base organically. “We became students of Instagram to figure out the best way to connect with people, create the best content and deliver news,” Carney explains. “The challenge for us was, how do you stop people who are scrolling through their feed for funny videos and memes, to stop and consume news?”

One tactic that worked for RocaNews was honesty: We know you hate the news. Try us. We do things differently. Another was including simple games and quizzes in their content to engage users and secure feedback. Yet another was getting Instagram influencers to share their content. It worked. Within a year, RocaNews had amassed over one million engaged followers on Instagram and 50,000 on a companion daily newsletter. In the process, RocaNews became one of the world’s fastest growing news companies with the highest user engagement of any news platform on social media. RocaNews’ engagement rate was four times that of Barstool and Morning Brew, eight times that of Vice News and 10 times that of CNN.

A master of understatement, Carney observed, “Instagram proved to be an incredible vehicle for delivering the news.”

In addition to amassing a major audience, RocaNews’ first year also brought important learnings. As hoped, it was attracting users from both sides of the political aisle thanks to its mission of being factual rather than political. While most users are young, RocaNews was attracting people aged 50 and above. Says Towey, “We are filling a void for young people but also older adults who previously were ingrained in legacy media.”

Relying on a third-party social platform is not without risk as some very important and de-platformed people discovered in 2020. Too, the specter of the federal government changing the playing field with Section 230 wasn’t a comforting thought either. The founders planned from the beginning to eventually move to an app.

With growth mode in full gear, the RocaNews teams began planning a second fundraising round, a Series Seed, in September 2021, to scale the company. During this time, a serial entrepreneur who had been following RocaNews on Instagram and like what he saw reached out to them. It was Ori Allon, founder and chief strategist at Compass Real Estate, who had previously founded and exited software-driven startups to Google and Twitter.

Allon, who would eventually lead RocaNews’ seed round, had an interesting proposition for Towey and Carney: acquire the App Store’s top-rated news app, River, in a stock-for-stock deal. Towey explains the strategy. “River had a great team that had developed a platform with proprietary algorithms for aggregating, searching and filtering digital news. This would give us the platform we needed to diversify our channels. For their part, River needed original content and marketing. It was an opportunity for both companies to build something better together and elevate what we were doing.”

On January 19, 2022, Towey and Carney announced that RocaNews had successfully closed their $4.4 million seed round and the River acquisition. It was a satisfying day for the best friends and now bona fide entrepreneurs. While both were impressed with their mix of investors—angel investors, proven tech moguls and businesspeople—each offered a take on the announcement.

Says Towey, “The success of our seed round shows our growth is not an accident. We have a game plan for becoming a great news company and transforming the news industry. We know how to get people to enjoy and consume news. We cannot be more grateful to our investors and excited about what we are about to do.”

Says Carney, “It was important to us that our pre-seed investors be involved in this follow-on round. They bought in to RocaNews from the very beginning and we are loyal to them.”

The biggest challenge now, says Carney, is what comes next as RocaNews grows its team, diversifies with its own social platform and app, expands gamification in summer 2022, and looks ahead to employing AI and Web3 to continue its march to democratizing the news. “It will be like putting lighter fluid on our flames,” he says.

Looking back over the last 18 months, both agree the biggest win was hitting one million followers, which increased interest in RocaNews exponentially. People came out of the woodwork with unsolicited advice on what to do next. Says Towey, “We love the feedback. It’s like getting a lot of fortune cookies. At times, it’s a lot of noise, but also a great problem to have.”

Asked if they had advice for others who want to start a business, Towey encourages founders to be willing to stumble. “The amount of faith it takes to start a company is intimidating, but you can do it.”

Echoing his friend’s advice, Carney adds, “You have to be light on your feet and ready to pivot if things are not going the way you want them to go. Stay passionate and have fun.”