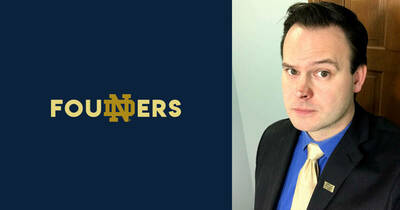 During the height of the COVID-19 lockdown in 2020, Chas Grundy found himself working from home, juggling four kids, on-line school, and other parental duties with his wife, Amber (‘02 BA, ‘04 MA, ‘07 PhD). So what did he do? He dyed his normally brown hair pink. Yes, PINK. Imagine jumping on a Zoom call with a colleague and seeing that.

Don’t worry. Web cameras did not break. The world did not stop. Instead, Grundy and his University of Notre Dame colleagues had a good laugh. He certainly had their attention before jumping into “work stuff.”

Although the pink hair was done in part to amuse his kids, Grundy is known to inject fun into his professional life as a way to engage and teach people. By day he is the manager of product services for Notre Dame’s Office of Information Technologies. In this role, he is the primary advocate for campus users with regard to key enterprise products and services, a role that includes software implementations and training.

During his free time, Grundy is both a professional speaker—one of his self-professed superpowers—and the founder of Hedgehog Interactive, a company that is transforming professional training with gamification. In both cases, he enjoys injecting fun into what he does and seeing how people react, engage and learn.

So how did an admitted tech geek, a guy with a degree in Japanese and Computer Applications, whose professional life is based in IT, start not one but two side gigs that help adults pivot back to their childhoods when learning was fun? Much of it has to do with Grundy’s willingness to put himself out there.

“It kind of started my freshman year in high school,” explains Grundy. “I had a choice of taking French, Spanish, or Japanese for my language requirement. In a quirky moment, I chose Japanese. That put me on a path.”

That path ultimately continued into college. His mother worked at Notre Dame and his family were all Fighting Irish fans, so Grundy applied to one college. “There was no other choice in my mind but Notre Dame,” he says. “I attribute that to the gravitational pull of South Bend.”

Once on campus, he had no idea what to major in until an advisor suggested the College of Arts and Letters. While there were required courses, the advisor explained, Grundy would have the flexibility of independent studies, in effect fashioning his own degree. “Majoring in Japanese and Computer Applications made sense because I’d already earned college credits in Japanese in high school and had experience writing software and building computers. I was grateful the advisor clued me in on an important lesson. Just because the path is charted doesn’t mean you can’t color outside the lines.”

Grundy spent his sophomore year studying abroad in Nagoya, Japan. There he learned another vital life lesson: resiliency. He thought he had enough of a command of the Japanese language to communicate. Instead, he found life was a constant game of charades as he tried to pantomime his way through conversations. A bigger challenge was navigating an issue with his initial host family. A death in the family made it impossible for his host family to sponsor an American teenager. Fortunately, Grundy was placed with a new host and got his life abroad back on track.

“It was very difficult putting myself, a kid from Indiana with a narrow world view, into a totally foreign culture. Even so, that year had a life-long impact on me. I learned the importance of experiential versus book learning, how to build relationships, and how to be more deliberate and intentional about what I needed to grow and survive,” he says.

But it was how the Japanese treated each other that really made an impact on Grundy in both his personal and professional relationships. “Treating others with respect and grace are really important to the Japanese. They never attack others in public. This is instrumental in business. As a leader, you are your team’s biggest cheerleader in public. Do your coaching in private. People value how you make them feel.”

Returning to South Bend, Grundy knuckled down. He graduated a semester early. He then launched a web development firm with a friend. Life was good but after three years of self-employment, he realized something was lacking. “We were making money, but we weren’t thriving. We were great at our jobs, but not at the business.”

A friend suggested he apply for a web developer job at Notre Dame, and Grundy landed it. “I thought I’d be there a few years—that was 16 years ago. In all, I’ve had ten different jobs at Notre Dame, all within the sphere of addressing the university’s business needs with IT,” he explains.

It didn’t take long for Grundy to start flexing his superpowers on campus and beyond. “I did theater in high school and college and was not afraid of getting in front of  audiences. A lot of what I do at Notre Dame involves abstract concepts. I have a way of explaining these concepts through storytelling that our faculty enjoy, make them laugh and learn. In 2009, I turned my love of public speaking into a side business. Over the last 13 years, I’ve spoken at conferences, workshops, and performed at storytelling events on topics that include storytelling, technology, management, marketing, higher education, and non-profit leadership.”

Back on campus, Grundy found some of his biggest challenges in IT involved getting users across campus to learn new software systems. One project in particular was a struggle. “We couldn’t get people to use the new system, so we decided to take a different approach. We made it fun by creating a Jedi Academy training program. All of a sudden people were interested and started signing up.”

Realizing the IT team was onto something, Grundy tried it again. This time he created a Google Wizarding College for staff and faculty. More than 500 people signed up. “It proved my theory that by gamifying training, people pay attention and participate.”

It was so successful, he wanted to bring the training approach to colleagues at other universities. He developed a prototype and shared it with his boss at Notre Dame. His boss’s response? “You are going to make people pay for that aren’t you?”

In 2016, Grundy launched Hedgehog Interactive to bring fun, play-based training to universities, businesses and other organizations. The name was inspired by Jim Collins’ bestselling business book, Good to Great. A hedgehog does something exceptionally well and is successful doing that thing. To be a success in business, you have to identify what you can be great at, where your passion is and how to make money from it.

“I saw an opportunity to be the best in the world at the gamification of professional training. I’d had the name Hedgehog Interactive from another company that didn’t work so I brought it back. Our squiggle hedgehog logo, created by Notre Dame designer Tim “Oak” O’Connor, is simple, whimsical, and reflects the fun we bring to training.”

Grundy and Hedgehog collaborators ultimately built three professional development games: Road Trip, a project management game; The Curse of the Help Desk, a game for training customer service representatives; and a Product Management Game aimed at higher education. Grundy also consults with clients and also offers custom training. To date, his games have been used by hundreds of companies, organizations, and individuals to train and entertain staff and students. Help Desk is the most popular offering and is designed to help desk professionals to understand and solve problems through simulations and a game where they earn points.

“In one case, a customer who calls in requesting an exorcist because his computer is flickering. Crazy, right? But the training takes participants through how to solve the issue by asking the right questions,” Grundy explains. “It works really well but some companies don’t see it as being serious enough. My response is professional training is too serious. If you want to teach people something valuable, change the dynamic and make training fun.”

Grundy’s vision for Hedgehog Interactive is to license its products to reach more people. However, the pandemic lockdowns that sent many people home to work caused demand for in-person training to stall. Grundy hasn’t given up though. “Hedgehog is my playground. I exercise muscles I don’t use at work. I can take creative risks, and it’s fun.”

And with a busy family of four and a wife who is the CEO of a nonprofit, he really doesn’t have the desire to push the Hedgehog rock up the hill as a full-time entrepreneur. “For now, it’s my passion project. Having investors would change the dynamic and would require more of my time.”

Grundy’s biggest win to date with Hedgehog is the personal satisfaction of hearing people laugh when doing the training. He also takes great satisfaction in launching a company that has enjoyed success. “The difference between success and failure is taking the first step. Unless you try, you will never succeed.”

Meanwhile, his kids think he’s crazy with his goofy dad jokes, his (one time) pink hair and his dives into popular computer game Minecraft with his son. And he continues to help the Notre Dame family master IT in enjoyable and engaging ways. Life is good.

Grundy’s advice to students and others who want to start a company or side gig is this: execution is better than ideas. “You can’t build your reputation or a company on what you’re going to do. Put yourself out there and be willing to bomb. Don’t let fear get in the way. Be confident and do it!”