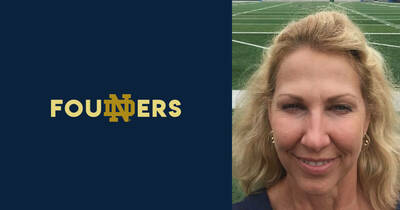 Growing up in the small southern Indiana town of Jasper, Audrey Beckman dreamed of becoming a doctor. When she realized how long the educational path would be, Beckman pivoted to engineering.

“People ask me why engineering? It wasn’t a major young women typically picked in the mid 1980s. I didn’t grow up taking my bike apart. My dad didn’t do handy stuff. What attracted me was the combination of math and science,” she explains.

Purdue University was a logical choice for engineering, but Beckman instead chose the University of Notre Dame even though its engineering program was smaller. Part of what attracted Beckman was not having to declare a major during freshman year. When it was time to choose, she went with mechanical engineering, a discipline that combines engineering physics and mathematics principles with materials science to design, analyze, manufacture, and maintain mechanical systems.

At the time, Notre Dame’s College of Engineering was fairly small with a male-to-female ratio of nine-to-one. Beckman was a pioneer of sorts, but it wasn’t something she ever dwelled on. She just dove in and did her thing.  Like many engineering students, she had close friends, male and female, who would study together or help each other out when learning new concepts.

Between her junior and senior years, she secured an internship with Zimmer (now Zimmer Biomet), a publicly traded medical device company headquartered in Warsaw, Indiana. She had first learned of the company while on a field trip to Zimmer her sophomore year. “A lightbulb went off for me,” she recounts. “I loved medicine and here were all of these medical products with engineers behind them. I knew where I wanted to be.”

During her internship, Beckman was given three projects, one of which was designing a change for a tibia plate used to resurface an arthritic knee joint. Another project was research based. “I really enjoyed the design project, the other not so much. It was clear I wouldn’t go into research.”

Despite graduating during a national recession, Beckman ultimately landed a position with Zimmer in the fall of 1987. Instead of packing up for New York City, the Bay Area or other metro area like many of her classmates, Beckman launched her career in Warsaw, which she describes as a “funny little town in the middle of cornfields.” Little did she know she would spend the next 30 years in the backroads town, holding multiple executive level leadership roles in the global medical device industry.

At Zimmer, Beckman was again an accidental trailblazer. “There were a few women engineers in product development when I joined, several of whom went on to management roles. For the most part, the environment was welcoming and agnostic. The attitude was more like do the work and you’ll advance.”

She continues, “When I started, I didn’t understand machining operations which was important to designing parts for ease of manufacturing, so I spent time in the Tool Room, learning how to make things on mills and lathes, and later on the manufacturing floor, talking to the production machinists and learning how create designs that could be made. “The machinists took me under their wing and shared their knowledge. It was a great way to learn.”

Less than 10 years into her career, Beckman was chosen to lead the Knee Development Group, which is responsible for designing new knee joint implants. This was her first management position and the first time she had direct reports and budget responsibilities. She credits the Master’s in Business Administration she earned in 1993 for her business knowledge but admits the first six months were like drinking from a firehose.

“It was definitely an ‘ah-hah’ moment.  I spent most of each workday in meetings since we were launching new products around the world. I suddenly realized how precious time is, especially when other people are relying on you,” she says.

As Beckman progressed in her career at Zimmer, she was recognized as a transformational leader, taking on multiple roles that required quick and drastic change.  Over the last 14 years with Zimmer, she held senior vice president positions in Global Product Development, Medical Training and Education and Strategic Quality Initiatives. She calls each role a learning experience.

“During my time leading Medical Training and Education, we were building a global team, hiring over a hundred people in over 25 countries. This was totally different from product development. Resourcing and budgeting were much more complex and  required much convincing at multiple management levels. But we got it done,” she says.

Beckman was halfway through a major initiative for Zimmer when the company acquired a Biomet, another top five player in the global orthopedic implant industry, in 2014 for $13.4 billion. At the time, she was serving on CEO Dave Dvorak’s senior leadership team and could see the significant organizational changes the combined company faced.

“After finishing the initiative, I decided I had charged up the hill enough,” she says. “I was ready to do something else.”

That something else was becoming an independent business consultant focusing on startups. For several years, Beckman had been a member of VisionTech Angels, one of the Midwest’s most active angel investing networks. VisionTech Angels is a “hands on” investing group whose members not only write checks, they also mentor portfolio companies looking for experience and expertise in their industry. Beckman focused her early investments on life sciences companies before branching out to software startups.

At first, she wasn’t quite sure how to position her consulting practice. “I thought I should specialize in strategy, design and development or education, but with my experience I could advise any functional executive. So I put my consultancy out on LinkedIn and the business started to come through word of mouth.”

In April 2020, Carmel-base serial entrepreneur Oscar Moralez approached Beckman about joining a startup venture studio he was planning . When the decision was made to focus on life sciences startups, she accepted the offer to come onboard as a part-time studio collaborator. “What attracted me was the process-driven approach of Boomerang, which takes entrepreneurs through commercialization and business-building. It was fun to start with a blank sheet of paper and design a process for the studio.”

In November 2020, Beckman was named Boomerang’s chief innovation officer. Her focus is establishing partnerships with universities, health systems, companies, and startups that can bring early-stage ideas and technologies to Boomerang’s venture studio and tap into the staff’s expertise, capital resources and extensive network. “We currently have relationships with Indiana University and Purdue and have had early conversations with Notre Dame. We’ve founded one NewCo, have a handful of other projects in the Studio, and more than 20 in our pipeline,” she says.

“Boomerang will look at any number of ideas, but we do limit our cohort size. Our goal is to build successful companies,” she adds.

The independence that comes from consulting fits Beckman well. “I feel liberated getting to choose what I do every day. I built my first career helping people and the medical field through Zimmer. Now I love working with people from the business side of medicine.”

Giving back is a large part of what Beckman chooses to do. In addition to local non-profit board work, she has participated in several advisory boards at Notre Dame, including the Department of Aerospace and Mechanical Engineering’s Industry Advisory Board, the College of Engineering’s President’s Advisory Council and the Women in Engineering Advisory Group. She serves as board member and advisor to Enlighten Mobility, a startup founded by a Notre Dame ESTEEM program graduate and co-winner of the 2018 McCloskey New Venture Competition grand prize.

Looking back over her impressive career, Beckman says she was never held back due to gender. “The biggest challenges came with accepting new and challenging roles, focusing on doing my best work every day and setting a good example for my teams,” she says. ““I finally found balance near the end of my time with Zimmer. I found an exercise studio and started goingAlong the way, I learned that to be an effective leader, you have to take some time for yourself.  Later in my Zimmer time, a local fitness studio opened up, and that became my ‘decompression’ time. I encourage everyone to make time for themselves sooner rather than later.”

In terms of her biggest career win, she has two. “I have had opportunities I never imagined I would have, and I am very thankful for that. The thing that I am most proud of  is being one of the main engineers on a knee implant system that is now placed in millions of people around the world with great clinical results.”

Beckman’s advice to those who want to start a company, launch a technology or become a consultant is this. ” Take your time to learn the space. “Understanding problems leads to better solutions. Appreciate the fact that you don’t always know what you don’t know. Then find advisors for what you don’t know want to know better.”