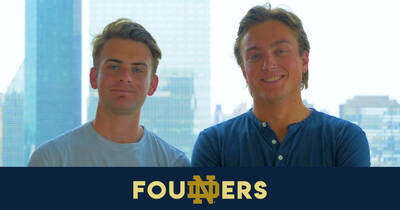 When Philadelphia native Will Crager arrived on the Notre Dame campus in the fall of 2015, the first person he met was New York City native CJ Dunne. It was the start of a strong friendship and now business partnership between two guys who consider Alumni Hall the “center of the universe.”

“When you join Notre Dame, you join forever,” explains Crager.

Adds Dunne, “I agree with Will. There is only one Notre Dame.”

For the next four years, the two were fast friends, three of those years as roommates in Alumni Hall. When they graduated in 2019, Dunne headed to a job with Goldman Sachs as an investment banking analyst while Crager became a co-owner of the Whitman Brewing Company. They knew they’d remain friends. What never crossed their minds was starting a business together, let alone launching an alternative social media platform intended to put control back into the hands of creators.

Dunne caught the startup bug first. “When we were at Notre Dame, I started a news aggregator for positive news; the GDP is up, mortgage rates are down—that kind of thing. It was my first experience creating a product. I learned that building something is possible if you are passionate about the work.”

Later, at Goldman Sachs, Dunne continued playing around with the concept of communities on the internet, eventually recruiting Crager to work with him on a sports platform. “The idea was to create a social place for college fans to come together before a big sporting event—say for example, Notre Dame and Michigan—talk smack with rivals and then bet on the game. Ultimately, we didn’t do it. Online gambling is a tough thing to pull off,” Dunne says.

The experience didn’t deter the friends. Both had been active on Facebook, Twitter, and Instagram in high school and saw an opportunity for next generation social media. So, following Michelangelo’s advice of “critique by creating,” Crager and Dunne became students of legacy social media and groups on the Internet. They went back to original chat boards and studied what makes communities successful and not successful. While they found interest-based communities across the web, they also discovered creators’ voices, their ability to control their brands, and their earning potential were being stifled.

Dunne explains. “Legacy platforms are driven by ad revenue. And while they welcome creators, the interest is on getting eyeballs on ads, often to the detriment of creators. Legacy platforms rely on world-class creators' skill, time, and resources to help attract large, engaged audiences. Despite serving as critical sources of new users, views, and engagement, world-class creators often are paid a fraction of the revenue their high-quality content generates.”

Crager adds, “We started thinking, what if you built a platform around every category of creator and interest area that returns control back to the creator? What would that look like? For example, people into swimming, fitness, and the Olympics could follow Michael Phelps. They could pay a small monthly subscription fee to follow him and get his original content. That became the nexus for SageSpot.”

As the basis for SageSpot gelled, so did its value proposition of changing the dynamics within the creator economy. The focus became making it easier to establish subscriber-based communities where subject matter experts can deliver premium content directly to their core following. The added bonus for users is the opportunity to meet people with the same interests and passions anywhere in the world and further discussions and relationships.

Crager and Dunne began recruiting creators as they built the SageSpot platform, targeting creators who had following on legacy social media, a high level of expertise in a field and a desire to share with their community. The value proposition was simple. We can help you take your following and build a more lucrative business you control.

Says Crager, “Any creator on traditional social media is a potential SageSpot user. The challenge is getting their most passionate followers to follow them to a new platform for exclusive access and content from the person they admire.”

As they talked to potential creators, including professional athletes and celebrities, they found it didn’t take much for the lightbulb to turn on. “No one understands SageSpot better than Creators. They understand and have the desire to get more back from their name, image and likeness. The excitement is there,” Dunne says.

Initially, Crager and Dunne bootstrapped the startup. In early 2021, they got a financial boost from friends and family. This enabled them to bring on Chris Clarizio, also a Notre Dame alumnus, as Chief Technology Officer and Co-Founder. While a student, Clarizio worked as a data science researcher for Notre Dame and oddly enough, developed a web application to scrape friend and post information from Facebook. He then worked as a software development engineer at Amazon Web Services. “Chris really rounded out our team,” Dunne says.

By mid 2021, the SageSpot co-founders needed more serious money and with the help of advisors, set out on a seed fundraising round. Billed as the social platform for world-class creators, Crager and Dunne succeeded in raising $3 million in a round led by Khosla Ventures with additional investment from superstar athletes Tom Brady, Rory McIlroy, Torrie Wilson, Larry Fitzgerald, and others.

“Investors are excited because they understand the power of the platform and what it can do for creators who want to turn followers into paid subscribers. SageSpot has the potential to really help Creators build their business as well as provide passionate users with a community of people who care as much as they do,” Dunne says. “The Internet is the most powerful tool for civilization since the invention of fire, and it is woefully underutilized. We refuse to accept that as the best we can do. With SageSpot, two strangers will be able to meet and engage on what they are truly passionate about in a dedicated environment on the Internet.”

Khosla Ventures Founding Partner and Managing Director Samir Kaul concurs. "SageSpot solves a major problem for more than 50 million creators around the world: monetization. Legacy social platforms make it easy to create large followings but often make it difficult for creators to earn money from their content. SageSpot empowers people to deliver their highly-valuable content directly to their most engaged fans that are proud to support them."

Tampa Bay Buccaneers quarterback, seven-time Super Bowl champion and now SageSpot investor Tom Brady was attracted to SageSpot’s thesis of giving creators a chance to truly monetize their personal brands. “Over the past decade, social platforms have obtained a lot of control over users. SageSpot is leading a movement to give creators a chance to fully leverage their valuable content how and when they want.”

Championship golfer Rory McIlroy chipped in his own reason for investing. “I’ve grown up in the social media era and have experienced, firsthand, the considerable potential and challenges of the various platforms. SageSpot's model helps creators develop an affinity-driven space where like-minded fans can congregate, offer their opinions, view content and otherwise share their love of a sport, hobby or person. It's a fascinating step towards a friendlier, more positive online fan experience."

Closing the multi-million-dollar seed round was definitely a win for SageSpot, providing fuel for what’s next. Says Dunne, “We are grateful for the support of everyone involved. We’re now focused on building a fantastic product.”

At the top of the list was hiring. With cash from the seed round now available, the co-founders needed to expand their team. Finding talent in the tech sector has been tough. Fortunately, their vision for the platform is helping them attract people. At the end of 2021, SageSpot had a team of eleven. By February, they will have 15.

Recruiting creators to the platform is also a top priority. Any creator on traditional social media is a potential SageSpot user. That includes professional athletes, musicians, artists, actors, master gardeners, and fine furniture builders. While they don’t necessarily need a large following, they must be passionate about sharing their craft. In this way, they will attract followers who share their passion and monetize their SageSpot.

"Truly great creators are inherently teachers. They have that desire and drive to share their talent with the world. It is who they are. SageSpot allows creators the joy of sharing what they love and makes sure they get compensated for their expertise and effort,” Dunne says.

One thing that hasn’t been a challenge for the friends turned co-founders is working together even through the innate stresses of a startup. “We have known each other for more than eight years and have built a reservoir of good will between us,” Dunne says. “Nothing can hurt that.”

Laughs Crager, “Yeah, we do know each other’s strengths and weaknesses. The people we do annoy are our other friends. All we talk about is SageSpot.”

Asked who they’d personally like to see on SageSpot, Crager is quick with his top pick. “James Clear, author of Atomic Habits. His weekly newsletter reaches over a million people. He has great content and a following,” he enthuses.

Dunne would like to see Athena Calderone, creator of the lifestyle site EyeSwoon and  author of the James Beard award-winning cookbook, Cook Beautiful, who is often compared to Martha Stewart. Says Dunne, “She’s deep thinker and creator. My goal is to get her on SageSpot.”

With their seed round behind them and building out SageSpot platform ahead, Crager is confident yet practical about the future and in his advice to other would-be entrepreneurs. “The sky’s the limit for SageSpot but CJ and I have a lot of wood to chop. I would tell other entrepreneurs: go with your gut and act on what’s true to your heart.”

Adds Dunne “If you have a vision of what you want to build, do everything in your power to get that vision out of your head and into the world. Don’t stop until the mission is complete.”