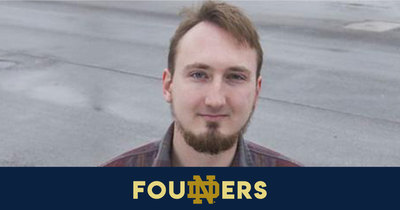 Growing up in Lake Tahoe, California, Bradley Tener never let a little snow faze him. Those months when it snowed more than 20 feet, he simply grabbed his snowboard and tackled the slopes. The only time it did bother him was when the power went out for a few days and his family had to put their perishable food outside in the snow. “It was a fact of life,” he recalls.

When he moved to South Bend, Indiana, where the average annual snowfall is a mere 63 inches, Tener thought he’d left challenging weather behind him. Little did he know his time at the University of Notre Dame earning a B.S. in civil engineering would lead to a “snow job.”

Tener has a unique connection with Notre Dame. His mother was among the first class of women accepted to the university when it went coed in 1972. Although she was unable to attend, Tener chose Notre Dame over Ivy League schools due, in large part, to its Catholic faith-based community. It proved to be a profound decision.

While he was a freshman, Tener’s father passed away from an emergency health issue. Two thousand miles from home, Tener felt helpless and distraught. “The Notre Dame community stepped up—friends, rectors, professors and university staff reached out to help. Everyone gave me all the time I needed. My grades suffered a little, but it could have been worse. I will always be thankful to Notre Dame for that.”

There are accidental tourists and then there are accidental entrepreneurs. Tener’s passion is improving communities through high impact, small projects. What began with half a dozen successful small, smart city projects during his student years, ultimately morphed into a growing startup company.

Tener started with a pilot project for the City of South Bend that would monitor winter driving conditions for the city. The project would measure the temperature of roads as well as the temperature of the air, humidity and dew points at strategic locations throughout the city through specially-designed sensors. The data the sensors collected would be sent back to key city personnel in real-time. After the city’s first big snow storm, he ventured out on the yet to be de-iced streets to see if the sensors were recording data properly.

“I’m standing at an intersection, checking a sensor, and every time the traffic light turned yellow, someone would blast their horn and slide through the intersection. At least ten cars did this in 15 minutes,” he recalls. “It made a huge impression on me. At that point I realized what we were doing had the potential to stop accidents and save lives.”

That pilot coupled with Tener’s “ah-hah” moment led to the founding of Frost Control Systems in 2017. The company manufactures, deploys and manages a patent-pending fixed Road Weather Information System (RWIS) product which helps cities determine where road deicers are most needed so traffic can continue to run freely and safely during winter months. The company pairs its hardware with industry leading route-forecasting software.

Through Frost Control Systems' Road Weather Information System, municipalities have the potential of reducing the amount of winter treatment they use over a given winter season. This is because it's not uncommon for some roads to be warmer than others in the same city, particularly in the bookend months of winter. Depending on various factors, including the temperature of the air, this means that the warmer roads can often require less winter treatment than the colder ones.

Another significant benefit of Frost Control Systems' product is the ability to control environmental impact. Tener explains, “We’ve had a number of environmental disasters in the United States recently that were caused by the overuse of road salt. The drinking water crisis in Flint, Michigan is a perfect example. This has cities scrambling to reduce the usage of road salt. We’ve seen a lot of great work done with new types of deicers, pre-treating roads and better plow blades, but it hasn’t been nearly enough to meet this new regulatory pressure.”

That pressure has been forcing cities to look at which of their hospital routes or school routes they could eliminate because they had already eliminated non-critical routes years ago. Tener believes that avoiding treatment should never be the answer. “That’s why we returned to the basics of ‘How can we place the right amount of salt everywhere?’ Getting accurate weather data and having that drive when and where deicers are applied was the answer,” he says.

Tener launched Frost Control Systems in 2017 with the help of the Notre Dame IDEA Center. “I think I was one of their first participants,” Tener says. “The process was extremely helpful. It was like having a fitness trainer except for startups. We’d get together and they’d coach me through the things I needed to do to successfully launch a company.”

One of the IDEA Center assignments designed to validate "product-market fit" required Tener to approach ten cities to gauge interest in Frost Control Systems. “Nine of the ten wanted my system,” he says.

Within a year of launching Frost Control Systems, Tener secured paid trials in three additional cities that were selected form the original nine that conveyed interest. By the end of 2019, he had systems installed in 15 states and Canada, with a long wait list for 2020.

Tener says Frost Control Systems' fast start out of the gate can be attributed to three things. First, a huge need to address ever-changing weather conditions safely, economically and in an environmentally conscious way. Second, an educated market aware of current solutions and open to options. Lastly, having a system that works really well and costs one-eighth that of competing systems.

“Most municipalities have delayed getting road monitoring technology because of the expense, despite pressure from state departments of transportation. When they see our pricing, they jump on board,” Tener says.

Asked about the highlights of his startup journey, Tener says being named the Start-Up South Bend Elkhart/Elevate Ventures Grand Prize for best community startup at the McCloskey New Venture Competition in 2019 was humbling. “Having Notre Dame recognize you as being one of the best, that says it all.” Frost Control Systems now has ten employees at its South Bend headquarters, half of whom are either Notre Dame graduates or form the local community.

Equally important is the positive response Tener and the Frost Control Systems team gets from city officials. “When you have cities reach out to you to say thank you, it’s a huge compliment. I feel good knowing we’re making an impact.”

Tener’s advice to others in the Notre Dame community who want to be entrepreneurs is simple: “You will be tasked with solving problems you won’t know how to solve. Be flexible and be personable. You will learn so much when you’re in an environment where you may not feel comfortable.”

He adds, “And if you need advice, there’s always someone who can listen or help, especially at Notre Dame.”