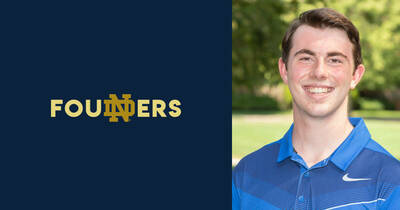 John Sexton was just a regular 13-year-old, enjoying life near Atlanta, taking road trips with mom and dad, hanging out with friends, and playing piano. Then one day his parents called a family meeting. He sat on the living room sofa, wondering what was so important.

At first, the news didn’t register. But as the discussion proceeded and Sexton learned that soon his father would be unable to walk, talk or even breathe on his own, he felt blindsided.

Looking back, Sexton says that day was devastating.“Dad’s illness was very hard to process,” he admits. “We didn’t know how his disease would progress, so we were always on high alert.”

ALS— amyotrophic lateral sclerosis—is a rare progressive disease that affects nerve cells in the brain and spinal cord, causing loss of muscle control. Only about 5,000 new cases are diagnosed in the United States each year. The cause is unknown and there currently is no cure. Although the mean survival time with ALS is two to five years, people can live longer. A notable example is Stephen Hawking, who lived with ALS for 55 years. Sexton’s father is now in year eight of living with the disease.

One thing was certain: eventually Sexton’s father would not be able to breathe on his own. The only way to extend his life at that point would be to have a tracheotomy. Although the surgery to implant the breathing tube is fairly simple, living with a tracheotomy can be difficult as it requires constant care and poses an infection risk.

“At the beginning, Dad made it clear he didn’t want a tracheotomy,” Sexton recalls. “About three years into the disease, he got bronchitis, which made it hard for him to breathe. We rushed him to the hospital. That was scary as we all came to our own conclusions, including my dad, about what would happen next. Once Dad experienced that, he felt like he’d been given a second chance. He still felt a strong sense of purpose. He got a tracheotomy a few months later.”

A large part of that purpose was working with his son on a project that would help him live as long as possible, as well as possible. “My Dad is fiercely independent and so am I.  Although he was confined to his motorized wheelchair, he still wanted his independence. During my sophomore year in high school, we developed what we then called EyeDriving, a way for him to control his wheelchair without the use of hands.”

The Sextons have a lot of brain power between them. The father graduated from the University of Notre Dame with a degree in MIS and then spent the first 11 years of his professional life wiring the Notre Dame campus for its systems and Internet. The son loves to code and was the software lead in his high school robotics club. Within three months, the duo had built a basic prototype that allowed Sexton’s father to control his motorized wheelchair using his eyes. By the time Sexton graduated high school, they had also developed voice and mobile joystick solutions.

By then, it was time to apply to colleges. Sexton’s short list included Georgia Tech and Notre Dame, both academically rigorous schools. But Notre Dame had something that Georgia Tech did not: a deep connection to the Sexton family.

“Dad played the trumpet in the Notre Dame marching band, and my mom earned a Masters in Theology from Notre Dame. Before Dad got sick, we would go to South Bend every year for football games and band reunions. When it came time to choose a school, I asked myself where I would be happiest. Hands down, it was Notre Dame,” Sexton says.

There was just one stipulation, in addition to majoring in Electrical Engineering, Sexton wanted to join the Notre Dame marching band. There was one small problem. Although he’d played piano all of his life, he’d never played a marching instrument. Determined to be part of the nation’s largest all-volunteer marching band, Sexton taught himself how to play the tuba. He also taught himself how to play electric bass. Now on Notre Dame football game days, he can be found marching and playing the tuba across the field and playing the electric bass in the stands.

That took some grit.

Sexton was just getting started. Just because he’d embarked on a rigorous degree program and band schedule didn’t’ mean he was giving up on his true passion, LifeDrive. He joined Notre Dame’s College of Engineering’s Grand Challenges Scholars Program for students who are inspired to contribute to transformational solutions for challenges facing humanity.

“I started the LifeDrive project to help my Dad, and now my career goal is to serve others in need through assistive technology,” Sexton explains. “What Grand Challenges does is provide a framework within the academic curriculum to bring my idea to life. As a part of that, I work on the business and entrepreneurial components of the project with the IDEA Center at Notre Dame.”

In the two-and-a-half years Sexton has been at Notre Dame, a lot has changed. Thanks to his own research plus guidance and mentoring through Grand Challenges, the IDEA Center, alumni and other experts, LifeDrive is a robust startup. The assistive technology company will provide alternative power wheelchair control solutions to disabled individuals. Using eye, voice and mobile joystick solutions, an individual can fully control their power wheelchair based on preference and need even if their needs change.

The target market is anyone who cannot safely operate a motorized chair using a joystick with their hands. This includes individuals with neuromuscular diseases like ALS, multiple sclerosis and cerebral palsy; those who have endured stroke and spinal cord injuries; and paraplegics and quadriplegics. All of LifeDrive’s apps can be used to adjust settings such as seating position, speed and lights, thus assuring a person’s safety, comfort and freedom to operate the chair. LifeDrive’s voice and mobile joystick options can also be used by caregivers for added safety override measures.

“The caregiver features are my Mom’s idea,” John says. “As Dad’s full-time advocate, she understands all that is involved in caregiving. These features make life much easier for her and others. For example, if mom needs to adjust dad’s chair position to make him more comfortable, she can do it with her voice instead of manually. If she sees the chair going in a dangerous direction, she can use the emergency stop feature to override and safely take control.”

LifeDrive is currently working on filing documents related to intellectual property, with all three Sextons listed as inventors. The team is also exploring next steps related to regulatory approval with the FDA and insurance reimbursement.

In 2020-2021, John assembled a team of six fellow Notre Dame students and entered the McCloskey New Venture Competition sponsored by the IDEA Center. The LifeDrive team won “Best Pitch” with more than 50 percent of the vote and walked away with $5,500 in prizes. The LifeDrive team includes Sexton, two electrical engineering classmates, a pre-med/science business major, a marketing major, and a graduate student in management. Two are tuba players. Sexton’s parents serve as advisors.

Up to this point, LifeDrive has been a labor of love. No one has been paid over the years-long journey. With the help of many advisors, the team is preparing for a pre-seed fundraising round next spring. They are also exploring non-dilutive research and program grants from the National Institutes of Health, Small Business Innovation Research (SBIR) and the U.S. Department of Veterans Affairs.

There is a lot of hard work to be done before LifeDrive gets to market. Says Sexton, “It’s a lot to balance, but it’s definitely worth it. The band really grounds me. I have an amazing support network, and I’m grateful to have opportunities to help and serve people.”

What really keeps Sexton’s motivational fire going is his father. “ALS makes it very difficult for an individual to manage or contain their emotions. But one day this showed up in a really good way. When our technology worked and Dad felt liberated, that brought one of the biggest smiles I’ve ever seen to his face. I’ll never forget it.”

He adds, “Living with ALS never gets easier. I wouldn’t wish it on anyone. If I can help one other person live longer and live well, then that’s the driving force for me.”

Although early in his founder’s journey, John has a wealth of helpful advice. “I was wondering if I could keep pushing LifeDrive after graduation, so I asked a few advisors what their thoughts were. One said I would kick myself if I didn’t do it. I’m young and have a tremendous network to rely on. There is so much to learn, and it’s important to know what you don’t know. Setting goals, finding help, learning, enjoying successes, making mistakes, all teach you something. Adapting is a necessary part of growing, no matter what area of life it applies to. That made my decision post graduation pretty straightforward. ”

In closing, Sexton adds, “If your heart is in the right place, doors will open for you.”