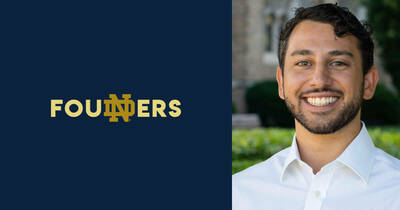 Growing up in New Jersey, Ayden Syal was all about sports. He played soccer. He played basketball. He loved it all. But when he got to high school, there was an unexpected barrier. At five-feet seven-inches, he was too short for the school’s basketball team but did run the 200 and 400-meter races for Seton Hall Prep’s track and field team. The experience was an important life lesson that fueled his competitive nature and personal resilience.

The University of Notre Dame was Syal’s dream school, offering a unique blend of athletics, academics, size, alumni network, and brand. While a student in the Mendoza College of Business, he bumped into a friend from high school, Brandon Wimbush, who at the time was Notre Dame’s starting quarterback. Though they ran in different circles, the two stayed in touch, not knowing life would bring them back together for a common purpose.

After graduation, Syal worked as an analyst for Morgan Stanley’s prestigious wealth management rotational analyst program and then Lexington Partners in New York City. He then joined IHS Markit as a senior strategy associate. “I had always wanted to go into finance and consulting,” he says, “but after working in the industry for a number of years, I felt compelled to do something where I could make a larger difference in the lives of others.”

That something more came from an unlikely place. On September 30, 2019, California Governor Gavin Newsome signed into law a bill that would enable college athletes to accept endorsement deals and hire agents while protecting their collegiate eligibility. The move, which would lead to a Supreme Court case and a major policy change at the NCAA , caused a lightbulb to go off for Syal.

”I saw the story and sent a text message to my brother with an idea for a startup: ‘Athletes will need a safe, secure, compliant medium to do this; someone who has their best interests at heart and vetted opportunities.’”

His brother agreed and within weeks, a company dedicated to helping collegiate athletes navigate the new world of monetizing their names, images, and likenesses was born.

In the first two months of MOGL, it was just Syal. Realizing he couldn’t do it all himself, he reached out to Notre Dame connections. One of them was Joe Schmidt, a linebacker at Notre Dame from 2011-2012. He suggested that Syal talk to his former Mendoza College of Business classmate, Wimbush. In January 2020, the former college quarterback joined MOGL as chief athletic officer.

The timing was perfect. That same month the NCAA began voicing support—formal approval wouldn’t come for another 18 months—for student athletes using their name, image and likeness for financial gain. Syal and Wimbush started working on the platform.

For the next year-and-a-half, the two entrepreneurs poured their hearts and what little spare time they had—both had full-time day jobs—into MOGL. A great deal of time was spent validating the hypotheses of what collegiate athletes wanted and needed to connect with personal brand opportunities.

“We did a lot of focus groups with collegiate athletes, professional athletes, and businesses to determine pain points, our value proposition, and how open they’d be to what we were proposing. And it’s important to point out, we weren’t just talking to athletes in the big revenue generating sports of football, basketball and baseball. We talked to soccer players, gymnasts, track and field, men and women,” Syal explains.

Their research identified four major pain points for student athletes if given the opportunity to benefit financially from their name, image and likeness. First, student athletes said they had no time to source deals for themselves, and hiring an agent wasn’t a viable option for most. Second, they had no safe and secure way to get paid. Third, having to report to a university compliance officer would be a hassle. Finally, the complexities of managing one’s name, image, and likeness are daunting.

He continues, “The old argument is student athletes get a full-ride scholarship, and that’s enough. But many don’t have enough money for food or simple entertainment. Most student athletes don’t go pro so the only time they can monetize their brand is during their college playing years.”

The motivation to build out the MOGL platform to empower athletes and the local community in the name, image, and likeness era was high for Syal and Wimbush. To test the platform, they hosted an autograph session with Wimbush in partnership with Downtown South Bend in Indiana in October 2020 three years after he’d last played for Notre Dame. Between 400 and 500 people showed up, affirming the star appeal of student athletes.

Between then and June 30, 2021, when the NCAA finally relented and agreed to allow student athletes to monetize their name, image and likeness, MOGL’s platform assumed its official form that connects student athletes and local businesses in a trusted environment. Athletes can join MOGL for free. In return, they gain access to verified businesses and opportunities, are assured payment through the app or other means of their choosing. MOGL also helps ensure deals are within compliance with the athlete’s college of university to protect eligibility.

Businesses have unprecedented access to athletes—need a swimmer for your club’s clinic? A gymnast for your autograph session? A football player for your business opening? Pricing is competitive and transparent. MOGL generates contracts and charges a 20 percent surcharge on bookings. It’s a simple model that also enables something universities crave: closer relationships with their communities.

There’s one last aspect near and dear to Syal and Wimbush: MOGL has committed to donating a portion of their revenue to local youth athletic programming in underserved areas through a partnership with a national nonprofit called Every Kid Sports to ensure all kids can play sports and reap the lifelong rewards.

“Today, youth sports are ‘pay to play’ with registration fees, equipment fees and travel fees. That’s cut out low-income kids. We want all youth athletes to have the opportunity to play, participate and have fun,” Syal says.

With the MOGL platform up and running and the stars anow aligned in their favor, Syal says he and the team have stared down a number of challenges. The biggest one was simply starting the company. “I had a full-time job while working on MOGL. It took an incredible number of hours to pull this off in terms of creating the platform, building a team and ultimately launching. But we stayed stubbornly focused and did everything in our power to build the company.”

Funding was another challenge. For the first year, Syal and Wimbush bootstrapped the company. In 2021, the company held a pre-seed fundraising round, which closed oversubscribed in October. Investors include the Irish Angels, an investing group composed of  Notre Dame alumni, plus professional athletes, business executives and venture capitalists. The funds will be used to hire sales representatives, fuel grassroots marketing and continue developing their technology platform.

Says Syal of the successful raise, “People recognize we have the right solution and the right team. Brandon, as a former collegiate athlete at the highest level, really understands the perspective of college athletes. Other team members are also former collegiate athletes so they understand the pain of the past and excitement of athletes who would like to take advantage of the NCAA’s ruling.”

“While people have heard student athletes can now profit from their name, image and likeness, there’s not an in-depth knowledge,” Syal says. “We have to educate people on both sides of the platform, student athletes and businesses.”

And that takes time, money and a bit of luck. Early on, sports platform The Athletic, did a feature on MOGL. The company has also earned headlines with Forbes, CNBC, USA Today, SportsTechie, and other local media outlets. MOGL is also working with Clemson University running back Darien Rencher, who has a weekly podcast The Players Club. Rencher, a five-foot-eight walk-on, dreams of becoming a broadcaster, and MOGL is helping him make it happen.

Wins like these and the fact that MOGL now has thousands of collegiate athletes and more than 500 business in major markets on its platform keep Syal motivated. However, the biggest motivation is that MOGL exists at all, is experiencing solid momentum and is proving their hypothesis that every collegiate athlete can have an impact on their local community.

Looking back, Syal says the biggest “holy s2#t” moment of this experience was waking up after leaving his former job and realizing he now worked full-time for MOGL. “I couldn’t believe this is what I get to do! I was in financial services my entire career, enjoyed it but  wasn’t passionate about it. What I am passionate about is the youth development and community empowerment piece of athletics. Sports teaches teamwork, accountability, and the importance of health and wellness. Athletics also provide incredible value for the local economy and business community. With MOGL, we can impact collegiate athletes at the prime of their careers as well as support kids through our partnership with Every Kid Sports.”

He adds, “Every athlete, every kid needs that opportunity.”

Now that he’s living his dream, Syal offers this advice to students who want to start a company: surround yourself with people who have your best interests at heart and who will push you.  And by all means, tap into the Notre Dame network.

“The Notre Dame network is Incredibly powerful,” he says. “Never be afraid to ask for something. You’ll never get anything if you don’t ask – your passion and work ethic will ring true.”