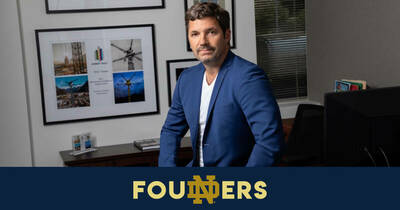 Not long into his career, Robert Piconi was in Ireland at the Notre Dame Shamrock Game, when he decided to check-in with his wife back home in California. The couple was expecting their second child and he wanted an update from her doctor’s appointment. He knew something was up when his father answered the phone and said, “Your wife has something to tell you.”

Now if that doesn’t stop you in your tracks.

“My wife got on the phone and said we were expecting quadruplets. Quadruplets? I was a little shocked. I still can’t remember the first year of their life,” he admits. Undaunted, the couple went on to have three more children for a total of eight.

Let it be known that Piconi likes to do things in a big way, whether it’s his family or starting companies that quite literally have the potential to change the world. Such is the case of his latest venture, Energy Vault, which he co-founded in 2017. Energy Vault is a transformational, grid-scale energy storage company that uses gravity-assisted technology and machine vision software to create the long-term storage desperately needed by the world’s rapidly growing renewable energy sector.

On August 25, 2021, Energy Vault closed on a $100 million Series C round, a round led by Prime Movers Lab, with additional participation from previous investors including SoftBank Vision Fund, Saudi Aramco Energy Ventures, Helena, and Idealab X. Then in a surprising move, the company announced its intention to merge with Novus II Capital, a special purpose acquisition company, as part of its initial public offering (IPO) on September 8, 2021, valuing the company at an equity value of $1.6 billion and providing up to $388 million of additional capital to accelerate growth.

If this seems like a whirlwind of success for a co-founder of a four-year-old company, it’s not that simple. Piconi has invested heavily in himself to get to this point. Over the course of his 30-year career, he has worked in the energy industry, pivoted to telecom during the internet revolution, switched to health care and medical devices, and now has returned to energy but in the renewable energy storage arena. Along the way he has racked up a wealth of experience, built a global network he taps into on a regular basis, and above all, has enjoyed each step of the way with his family, including moving the entire crew of ten to Europe so they could experience a more global upbringing while learning to speak other languages.

Piconi admits he is the antithesis of today’s young entrepreneurs who are intent on setting the world on fire as quickly as possible. Upon graduating from the University of Notre Dame, he went to work for Amoco in Chicago. After a year in the corporate office—and after marrying his college sweetheart—he transferred to Amoco’s largest chemical plant in Alabama to learn the operations side of the business before moving the family to Rome, Italy, and then Belgium, where he was part of a team that designed and built a world-scale chemical intermediates plant. Following his seven years with Amoco, a stint that included the acquisition by British Petroleum, he held executive leadership roles with Bell Labs/Lucent Technologies and Danaher Corporation and founded and exited several companies.

“I tell young people they really need to work in a global business in the early stages of their career. Don’t try to do everything at once. There’s a learning curve to know how to run and scale an organization. It takes experience, breadth, and an ecosystem of people,” he says.

In Piconi’s case, his ecosystem eventually led him to his current role as co-founder and CEO of Energy Vault. In 2008, he met Bill Gross, the founder of the legendary Southern California incubator Idealab. Gross had recently started a renewable energy power company, which was developing technology for concentrating solar power as a low-cost alternative to fossil fuels, and wanted to recruit Piconi as the CEO, but the timing did not work out. The two stayed in touch, sharing and collaborating on other ideas. In 2017, Gross contacted Piconi about a  revolutionary concept for grid-scale energy storage specifically aimed at renewables like solar and wind that had few long-term energy storage solutions.

Gross’s concept, which eventually reiterated to a six-arm crane and composite bricks that use potential and kinetic energy as a means of energy storage, was conceptually and visually futuristic. Piconi describes it as a cross between an erector set and the building block game Jenga. Here’s how it works:

Energy Vault’s technology combines vertical lifting systems with machine vision and AI software to control cranes, pulleys, and cables that raise and lower 35-ton (metric) composite bricks. The system uses wind and solar energy when it is generated but not needed to power motors that lift the composite bricks to elevation, becoming potential energy. When the grid needs the energy, the software autonomously lowers the bricks, turning a motor that discharges electricity, thus becoming kinetic energy. The number of bricks moved up or down over a given period of time corresponds to the amount of energy stored or released.

The modular bricks can be moved individually with milli-second response time reaching full power in 2.2 seconds, giving the system the capability of ramping up quickly to absorb or deliver energy on demand. The system is an ideal complement for solar and wind energy, which generate power intermittently, storing the power until the grid requires it.

Another unique aspect is the bricks can be made from the local soil from the excavation site or from waste materials destined for landfills such as coal ash, tailings from the mining process and de-commissioned wind blade fiberglass. Local materials and fabrication not only de-risks the supply chain but also minimize greenhouse gas emissions from the transport sector, which generates most CO2 emissions globally.

Piconi did his research before joining Gross in Energy Vault. “I was intrigued by a number of things. Wind and solar energy are significantly cheaper than generating energy from the lowest priced fossil fuels. While cheap to generate, storing renewable energy is extremely hard to do economically and sustainably, thereby making it difficult to deploy more renewable energy sources. This represents a huge unmet need. Competing storage options, namely lithium batteries, pumped hydroelectric and other thermodynamic processes, present significant challenges as they’re either resource and capital intensive, too costly to operate, inefficient due to a high loss of power during the storage process, or environmentally unsafe. Global warming was also becoming a greater risk to our environmental ecosystem.”

He adds, “There was also so much passion around finding solutions. The world was ready to collaborate on safe and stable energy storage solutions. Energy Vault had an opportunity to make a big impact. It was the right product at the right time solving a critical market need that is a global imperative for our collective future.”

As with any disruptive technology, Energy Vault had its share of non-believers. The biggest challenge Piconi faced was proving Energy Vault’s technology worked. In 2018, a quarter-scale demonstration tower was installed in Switzerland that allowed the company to refine the software that controls the system, test the durability of the composite bricks, and improve overall efficiencies to provide a cost-effective storage solution. That was followed by an immediate move to commercial scale so customers around the world could witness and test the technology, and the company could begin to sign contracts.

“We knew we needed to be single-digit levelized cost per kWh to add to photovoltaic solar or wind to be competitive with fossil fuel. This took a lot of engineering, software, and material science innovation to achieve a storage technology that when combined with renewable energy sources can be competitive with conventional natural gas-fired generation,” he says.

With this proof under his belt, the world took notice of Energy Vault. According to Piconi, the global response was overwhelming with interest coming from developers, utilities, industrials on multiple continents, and investors. SoftBank stepped up with a $110 million investment commitment in Energy Vault’s Series B funding round in July 2019. Yet there was one more hurdle to clear before broad market adoption: a full-scale demonstration project planned to come online in northern Italy by the end of 2019.

And that’s when Piconi, like so many other entrepreneurs since March 2020, faced a “hiccup “of black swan proportions: the COVID-19 global pandemic and subsequent lockdowns. Undeterred, the commercial-scale site was moved to Switzerland so Energy Vault could have more control over the installation. While standalone systems of the EV1 Tower were designed to be 500 feet, the height of a 35-story building, the commercial demonstration system was set at 225 feet, which was plenty to prove full capability. Despite this adjustment, a six-month delay and with Softbank’s Series B funding, Energy Vault’s core technology was mechanically completed and the 5MW commercial scale system was connected to the Swiss national grid in July 2020. For Piconi, his team, investors, and everyone else with a stake in a robust renewable energy storage system, game on!

That same year, Piconi received a little icing on the cake when the World Economic Forum recognized Energy Vault among its 100 Global Technology Pioneers, the only energy storage company named in 2020. Past winners include Airbnb, Google, Kickstarter, Palantir Technologies, and Wikipedia to name a few.

Since then, the company has continued to finetune its technology. In April 2021, concurrent with the announcement of an investment from Saudi Aramco Energy Ventures, Energy Vault launched its new EVx ™ platform with performance enhancements designed to have up to 85 percent round-trip efficiency; a more than 35-year technical life; a flexible, modular design that is 45 percent lower in height; and the ability to economically serve both higher power/shorter duration applications and longer duration requirements with zero degradation of the storage capacity over time.

With the recent Series C capital raise and IPO announcements complete, Energy Vault will be starting multi-continent deployments of its EVx platform, fulfilling a strong pipeline of customer demand across markets in the United States, Middle East, Europe, and Australia. Case in point: on October 27th, Energy Vault announced a massive 1.6 GW hour renewable energy storage deal with Green Jet Fuel producer DG Fuels that will provide sustainable aviation fuel to the commercial and logistics airline industry.  And so it begins.

Piconi admits the last several months have been intense in terms of navigating the Series C and IPO while concurrently scaling the business. What keeps him grounded is the mission of the company and the enormity of the problem he and the Energy Vault team is solving, but there’s something more personal that keeps him laser focused. “My biggest motivation is having a strong family and faith. You can’t separate work and family. I strive to be an example to my children. That keeps me going.”

His advice to future company founders is simply this: “Pursue what makes you happy. Do what you really like to do and go where you can make the biggest impact.”