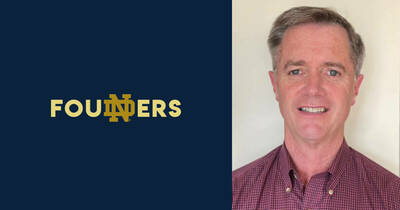 In 1984, David Gaus had a dilemma. He was about to graduate from the University of Notre Dame with a degree in accounting but didn’t want to be an accountant despite it being a “safe” career path. Instead, he wanted to follow an unlikely dream.

“Here I was, a beer drinking accounting major from Milwaukee who barely spoke English, let alone Spanish, and I wanted to go to Ecuador and volunteer in an orphanage. After much soul searching and still not having an answer, I did what a thousand other Notre Dame students had done before me. I went to talk to Father Ted,” he says.

Father Theodore “Ted’ Hesburgh was the president of Notre Dame. Widely celebrated for his great works with popes, presidents and civil rights leaders, students knew the priest for his open-door policy.

“What he did was pretty sensational,” Gaus recalls. “He listened to me, asked questions and strongly supported my decision to go to Ecuador.”

On face value, it would appear to be a simple conversation. Instead, the meeting kicked off a 20-year friendship between the two and changed the course of Gaus’ life in ways he never imagined.

Gaus’ story begins in Milwaukee, Wisconsin, where he grew up in a middleclass family. His father was an accountant and young Gaus naturally thought he’d follow that career path. Gaus grew up with Marquette University in the crosshairs, but when Notre Dame recruited him to play soccer, he gave the Fighting Irish a fighting chance.

“I had friends at Notre Dame and when I visited, I fell in love with it. I thought I’d be playing soccer or baseball but broke my thumb early freshman year playing baseball. That was the end of my athletic career,” he says.

Earning a business degree seemed natural. However, hanging out with people dreaming other dreams opened his eyes. Some friends were going to Santiago, Chile, through the Holy Cross Association to volunteer. He applied but didn’t get accepted. A high school friend told him about volunteering at an orphanage in Quito, Ecuador, that didn’t require he speak Spanish before arriving. With Father Ted’s blessing, Gaus left for Ecuador after graduation.

Ecuador is worlds away from Milwaukee and South Bend for that matter. A historically poor nation, it straddles the equator on South America’s west coast. Its diverse landscape encompasses Amazon jungle, Andean highlands and the wildlife-rich Galápagos Islands. For the next two years, Gaus immersed himself in his job, becoming a student of the local culture and Spanish language.

“While there I saw how the healthcare system didn’t work. I also met someone doing tropical disease research and got excited. But what could I do? I had a business degree,” he says.

Then it came to him what he needed to do. So Gaus wrote a seven-page letter to Father Hesburgh outlining a new plan. “I told him I wanted to become a doctor and work in Ecuador. But first, I wanted to come back to Notre Dame for pre-med. I offered to help underclassmen. He was supportive of my plan. There was one unanswered question: tuition.”

Unbeknownst to Gaus, Father Hesburgh took matters into his own hands. He took Gaus’ letter around and read it to people. He even read it as part of a commencement address at a university in Iowa. Sitting next to him on the podium was well-known advice columnist Ann Landers. While flying back to Chicago together, Landers (real name Eppie Lederer) asked who the student who wrote the letter was. She was so touched, she offered to pay Gaus’ tuition at Notre Dame.

“Father Hesburgh said she would give me $10,000 for my first year of school. If I did well, she would also pay for the second year. I did and she did. Eppie was like a fairy godmother to me,” Gaus says.

Indeed she was. As Gaus made plans to attend Tulane University for medical school and a master’s in public health and tropical medicine, Landers set out to find scholarship money for him. While attending a political event for George H.W. Bush in New York City at the Russian Tea Room, Landers asked if anyone had a scholarship for Gaus. Bristol Myers Squibb eventually paid for his entire four years of medical school. Gaus followed this with a residency in Family Medicine at the University of Wisconsin.

Gaus still marvels at what Father Hesburgh and Landers did for him. “They believed in this kid with a half-baked idea to go back to Ecuador. They saw something in me and took a chance.”

Gaus’ original goal was work as a family medicine doctor in Ecuador. Sensing the depth of need and with Father Hesburgh’s ongoing input, he decided his impact would be greater if he concentrated on changing the healthcare system in rural areas. The original idea was to start a clinic focused on health education, health promotion and disease prevention. After conducting a feasibility study that showed the community was willing to pay for medical services if they were affordable, Gaus founded a 24-hour outpatient facility. In the process, a board of directors composed largely of Notre Dame alumni was established and Andean Health and Development was born.

The clinic launched with a 12-month beta test to gauge community response. Although the Ecuadorian Ministry of Health offered free services, people wanted to come to Gaus’ outpatient clinic. “The flow of patients was steady. We saw everything—motor vehicle and farm accidents, snake bites, pneumonia, severe diabetes, difficulties in childbirth. It proved what was really needed was a hospital.”

But what kind of hospital? The Ecuadorian Ministry of Health hospitals were more like ambulatory clinics. There were missionary models where wealthy people would come in with money, run out of money and leave. There were also private clinics, but patients had to be wealthy to use them.

“We decided to hybridize. We wanted the missionary zeal yet had to be financially sustainable,” Gaus explains. “We wanted to care for anyone who walked in the door and be a source of pride for the local community.”

When the 17-bed Pedro Vicente Maldonado Hospital opened in 2000, one of the biggest challenges Gaus faced was deciphering the Ecuadorian culture. It wasn’t enough to diagnose a heart attack or deliver a healthy baby. Everything, he found, was secondary to understanding  the local culture.

“It’s very easy to live in the biomedical world of medicine but doing medicine in the framework of Ecuador is a big challenge. Indigenous people make up 20- to 40 percent of the population. The majority of the population is mestizo, a mix of Spanish and indigenous blood. Understanding the local culture is made more difficult as mestizos move back and forth between modern culture and the past. Fitting in and finding the right Ecuadorians to fill the spaces around you is very hard,” he explains.

Gaus and Andean Health and Development persevered. Not only did they figure out how to make the hospital work financially, it was ultimately staffed entirely of native Ecuadorians, 75 percent of whom are women. The hospital also trained six new Ecuadorian doctors in Family Medicine a year. This created a huge sense of local pride and empowerment.

Gaus is particularly proud of the impact of the medical education program. “We take care of a small percentage of Ecuador’s population. Where we’ve made our biggest mark is training Ecuador’s physicians. Over the last ten years, we’ve trained more than 75 family medicine physicians who are now faculty members training more medical students, working in the Ministry of Health in rural areas and about a quarter of them working with us. They are the new leaders of Ecuador’s healthcare system.”

He is also quick to note that Andean Health and Development does not have a professional fundraiser. Instead, it has a 20-member board of directors who provide their expertise and commit to raising $1 million a year. “One of our first hospital donations came from Daniel Meehan, a Milwaukee businessman and philanthropist active in the Order of Malta. Mike Hansen, a Notre Dame graduate and accountant, serves on our board for 25 years and is the Swiss Army knife of the organization. Mike really helped establish our business model. Mike Heisler, another Notre Dame graduate and physician, has served on the board for 25 years. “Everyone is just outstanding,” Gaus says.

When asked what the biggest win of his dream career is, Gaus first points to winning the state championship in soccer his senior year in high school. He pauses and then recognizes the bigger win: having Father Ted in his corner the last 20 years of his life. Nothing tops that.

Looking back at his original career crisis when he gave up accounting in favor of a yet to be entirely defined dream, Gaus offers this advice to future founders. “Take a blind leap of faith. Do things that seem wild and crazy to others. Be willing to make mistakes. Fail and get back up. If you want to be a firefighter, do that. Anything can be a vocation.”

Dr. Gaus is the focus of the book, Long Road from Quito, written by longtime New Yorker staff writer, Tony Hiss. David and his family live in Quito, Ecuador.