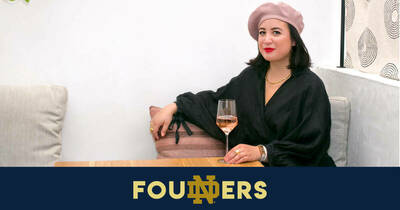 Early in Lauren Gamboa’s professional life, a University of Note Dame alumnus offered this advice: constantly ask yourself, what brings me energy? Not physical energy. You can eat a protein bar for that. But the deeply satisfying emotional and intellectual energy that keeps you pushing forward, learning, growing, and striving to be at the top of your game. If what you’re doing isn’t bringing you energy, well, it may be time for a change.

The advice proved to be gospel truth. And Gamboa has held it close, pulling it out whenever she felt she was at a crossroads.

Originally from San Diego , California, Gamboa spent part of her childhood years on Hawaii’s Big Island. She returned to Southern California with her family, where she attended a small Catholic high school. Looking for a more intimate college experience where she could pursue pre-med, Gamboa looked at Georgetown University, Boston College and Notre Dame. She chose Notre Dame; it just felt right.

Once in South Bend, what eventually didn’t feel right was her major. So she pivoted to the Mendoza College of Business and discovered an unexpected passion: consulting. She smiles as she admits, “I didn’t know consulting was a thing.”

What ignited her interest was a class on consulting with Viva Bartkus, the Paul E. Purcell Associate Professor of Management & Organization. Bartkus, who became a mentor to Gamboa, concentrates much of her teaching on the leadership approaches most effective in solving complex business problems. Her course is designed to bring out the best in her students. Bartkus’ expectations were high.

Gamboa recalls, “Her class was very challenging. About 30 percent of the students dropped the class.”

She, however, persevered. “Professor Bartkus had us divide into groups. Each week we were given a case study that we had to assess and build a case with recommendations for the client. The best, middle, and weakest cases pitched their strategies to partners  from Accenture, McKinsey and other large consulting groups for critiquing. My group was picked to present each week.”

Each week, Gamboa’s team chose her to make their pitch. “The preparation was intense. What it taught me was how to think on my feet. The experience strengthened my desire to go into consulting.”

Little did she know that the industry “judges” were also scoping out talent. This proved to be invaluable to Gamboa. In 2009, the United States was in the midst of a deep recession and companies that typically recruited at Notre Dame cancelled their visits. Seniors who anticipated offers from firms where they’d done internships were left hanging. Gamboa was one of the lucky ones.

“I got offers from companies in Chicago, Seattle and Los Angeles. Ultimately, I accepted an offer from CAST Management Consultants (acquired by West Monroe Partners), a Los Angeles-based boutique consulting firm focused on the banking industry,” she says.

Gamboa chose the smaller firm over the big brand firms for several reasons. Being closer to her family in California was important. She also knew working with a smaller firm would give her more opportunities to learn directly from the partners, including the lead partner, a Notre Dame alumnus, who has since mentored her throughout her career.

“What impressed me was the lead partner’s sincere interest in mentoring talent from the get-go. He told me, ‘I am invested in your success’ and consistently provided opportunities to contribute meaningfully at our clients’ executive level discussions.  I attribute his paying it forward attitude to Notre Dame. The university has a way of uplifting others. People walk away with a dedication to supporting one another. You don’t typically get that in the corporate world,” Gamboa says.

Recognizing talent, CAST gave Gamboa everything she could handle. She soon found herself working 80-hour weeks and traveling constantly on behalf of clients that included JP Morgan Chase, Royal Bank of Canada, Citibank, BMO Financial Group, and the Bank of New York Mellon. At the time, the banking industry was undergoing a lot of consolidation and the work was stressful. Three years in, she began to lose her drive and asked herself, is this job bringing me energy?

“I was so busy working, I didn’t even have time to answer that important question thoughtfully. I knew I needed to detach, step away and reflect on things. I ended up taking a five-month sabbatical and traveled the world.”

During her time away, Gamboa realized she had the right skillset for consulting but had reached a point where the subject matter didn’t bring her energy anymore. A new direction began to emerge. “What if I could marry a personal passion to my work? Something I had a natural affinity for? I had always been drawn to the hospitality industry. During my sabbatical, I did some consulting for a hospitality group abroad and was inspired,” she says.

Returning to California, she came back to CAST as she looked into pivoting into the hospitality industry. Meanwhile, she took a job scooping very expensive ice cream at an artisanal ice cream shop on nights and weekends to gain more firsthand knowledge. There was one minor problem. She didn’t have any relevant experience in the hospitality industry. Nor did she know anyone in the industry. Undeterred, Gamboa persisted. She began putting her name out to friends, acquaintances, former colleagues, and clients.

“The owner thought I was crazy to take on part-time shift work while also doing full-time consulting. But as I scooped, I thought about the pain points in the business. I also thought about how to build a consultancy in the food and beverage space for independent operators.”

Her strategy paid off. Not one but two people gave her resumé to celebrity chef, restaurateur, and cookbook author Susan Feniger. When the two met, Feniger told Gamboa she couldn’t pay her much, to which Gamboa responded, “I’m here to learn.” She accepted an offer and resigned from CAST.

Hired to do business development, the experience proved invaluable. At the time, Feninger was opening restaurants at Los Angeles International Airport and in Hollywood on accelerated six-month timetables. Gamboa found herself working on investor relations, brokering and executing brand partnerships and licensing deals, juggling multiple public relations firms, working with the food and beverage media and hammering out digital media marketing agreements for Feniger. “Everything I worked on moved quickly. I learned a lot and met many people in the hospitality and media industries in a very short period of time.”

During this time, people began asking Gamboa if she would help them build their brands. Drawn to the industry and armed with confidence and a solid background in consulting, she launched her consulting group (since renamed Cultivé). Scope of services included everything required to open restaurants and launch independent food and beverage brands, with Gamboa leading the business, investor and media strategies.

Within the first few months, the firm landed its first client, Cava Spiliadis, an importer of award-winning, organic wines from Greece. Over the course of several years, Gamboa worked with nine different wineries, introducing the wines to chefs and sommeliers, facilitating introductions, engaging the media, and educating consumers on new varietals. What struck her were the connections made between people, culture, and shared experience through the medium of food and wine. It was, she says, “incredible to witness.”

Until it wasn’t. In March 2020, California and the rest of the nation locked down their economies to “flatten the curve” of the COVID-19 global pandemic. While large swathes of the nation began to slowly reopen, California maintained its strict lockdowns. The state’s vibrant restaurant industry was dead in the water.

“All of the restaurants and brands we were slated to help launch in the United States went on hiatus. Fortunately, the non-profit and beverage work we were doing was ongoing,” Gamboa says.

An opportunity to delve deeper into the consulting work came in the form of  Homeboy Industries. Founded by Father Greg Boyle, a Jesuit priest, Homeboy is the largest gang rehabilitation and re-entry program of its kind in the world. For more than 30 years, the organization has provided training and support to formerly gang members and previously incarcerated people, allowing them to redirect their lives and become contributing members of society.

During the pandemic, the need for Homeboy’s services expanded exponentially. It wasn’t just for job development and placement services. Elderly shut-ins, at-risk children, and others across Los Angeles County needed food. Homeboy had the kitchens and people to help. What was missing was someone with the experience to rapidly create and scale a commercial operation to prepare and deliver meals.

A foundation approached Gamboa and Cultivé to work with the Homeboy board of directors on the project. In many ways it was a return to Gamboa’s Notre Dame days where she learned the importance of service to others as well as her years at CAST consulting on complex business issues. It all came together with the help of a powerful collaboration that included local government, local communities and Homeboy donors.

“Eventually, we created an operational and financial model that enabled Homeboy to prepare and serve 10,000 meals a week,” Gamboa says. “The work was incredible and really imbued our team with a new sense of purpose. Cultivé intentionally shifted our focus to work with clients and projects with a social purpose as part of their ethos.”

Even though Cultivé was hit hard and forced to reorient itself to survive, Gamboa says the pandemic has been a blessing in disguise. “It’s been painful, but it brought to the forefront where the Cultivé team wanted to spend our energy and time. We decided to put our skillsets to work for the greater good, a fuller expression of hospitality and service of others,” she explains.

The revelation also led to a rebrand of Cultivé with the goal of infusing new energy into the brand. For this, Gamboa turned to another Notre Dame alum, Stew Etow, founder of Ink + Pulp, a visual storyteller. “We worked on the new brand for a long time,” Gamboa says. “It was extremely important to reflect the refinement of our business. We’re not just consultants but thought partners building something collaboratively with our clients.”

For Gamboa, the most rewarding aspect of founding Cultivé is being able to define the type of work she does and choose the clients she works with. “It all comes back to what brings you energy. I want to work with good people who want to bring more to their communities and champion initiatives that contribute to social good. The experience with Homeboy was so valuable. Being able to measure my work on the level of community impact is incredibly fulfilling.”

Gamboa offers this advice to students who would like to become entrepreneurs and start something. “There is a wealth of resources at Notre Dame. Take advantage of them. Find mentors among the faculty and alumni. Know there is a community of people rooting for you. If you learn, grow and help others, you are not going the wrong way.”