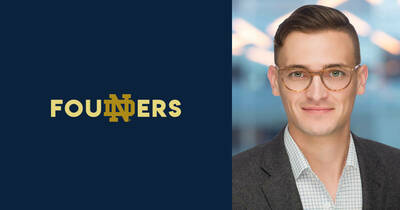 Tim Durso describes himself as a curious person who likes to figure out ways to do things better. As a child, he questioned things – and his parents. So he’d tinker, tinker some more, until he had his answer.

Durso’s personality trait has paid off big time. Two years after conceptualizing a new treatment for warts at a hackathon for dermatologists, Durso and his co-founders closed a $20.7 million Series A fundraising round for their company VeraDermics. Investors’ enthusiasm for the startup was ignited by the company’s novel drug delivery platform that has the potential to transform pediatric and adult wart treatment.

The company's platform offers a dissolvable microneedle patch solution that administers immunotherapy, a treatment that stimulates the body's own immune system to fight off the wart virus, with minimal pain, enabling children to have a kid-friendly, pain-free and easy-to-use wart treatment.

Who knew warts had the potential to be “big business?” Durso knew. He knew all too well. That’s because, as a small boy, he had a wart on his knuckle that wouldn’t go away despite multiple visits to a dermatologist who repeatedly tried to treat the wart with liquid nitrogen, a standard wart removal treatment.

“Freezing the wart was so painful – a seven on a pain scale of 10,” Durso says. “But each time, the warts would come back. My dad, a dentist, decided to take things into his own hands. He took me to his office, numbed my hand and cut the wart off himself. It never came back.”

That experience left its mark on Durso. While in high school in the northern suburbs of Chicago, he made up his mind he wanted to be a doctor. While many of his friends had plans to go to the University of Notre Dame, he was no fan of the Irish. “They ribbed me that the only reason I didn’t want to go to Notre Dame was because I couldn’t get in,” he says. “I knew Notre Dame had a pre-med program, so I visited campus, liked it and applied.”

Says Durso, “I owe a lot to my time there. I met my wife at Notre Dame—well technically it was in a dorm at Saint Mary’s, but close enough.”

His next stop was medical school at Loyola University Chicago. He originally wanted to be a surgeon, however a hospital rotation in surgery changed his mind. “There’s lot of personal sacrifice in medicine but for surgeons, the sacrifice is ramped up. They become consumed with their work at great personal expense. I couldn’t do it; I needed more balance.”

A rotation in pathology seemed a better fit for his curious mind. “I enjoyed looking at slides and figuring things out. Ultimately, I chose dermatology as it combined pathology and surgery.”

From June 2016 to July 2020, Durso was a resident in dermatology at the San Antonio Uniformed Services Health Education Consortium in San Antonio, Texas. During his time in Texas, Durso revisited the childhood trauma of wart removal.

“Kids get warts. Although they’re benign, there’s a stigma attached to warts, and parents want them removed. Freezing—cryotherapy— is the standard of care, but it only works 50 percent of the time. The chance of a cure in a patient with multiple warts is less than ten percent after one treatment, so a kid with warts always faces multiple treatment. That’s traumatic,” Durso explains.

“The problem is, we’re treating the wart and not what causes the wart, a virus. Injectable immunotherapy is a much more effective approach as there are fewer side effects and immunotherapy causes the body to respond to the wart virus. But kids hate shots more than they hate freezing. Adults hate shots, too,” he adds.

A big concern was the long-term impact of warts and their treatment. “Kids’ interactions with doctors and pain impacts them later in life. As a dermatologist and now as a father, I didn’t like the painful treatments kids with warts had to endure. I became interested in developing an alternative drug delivery system. While attending a conference, I was introduced to polymer-based drug-delivery technology. During my follow-up research, I stumbled on dissolvable microneedles, and it all sort of clicked.”

That’s when Durso’s curious mind went into overdrive. In September 2019, he attended the Hacking Dermatology Pitch Competition in Boston armed with a few ideas. One of them was a painless, microneedle-based immunotherapy delivery device for treating warts, especially in children. He formed a team that included his eventual co-founder, Reid Waldman, around his idea, dubbed “WartPatch.” Durso and the WartPatch team were ultimately among the five winners of the pitch competition. With $5,000 in prize money in the bank, VeraDermics was born.

Microneedle technology as a treatment delivery system was already in the market with products like ZitSticka™ and Peace Out “dots” for acne. Durso’s WartPatch differs in that it delivers a targeted immunotherapy impregnated in needles made of a dissolvable polymer. The patch is placed on the wart and body heat causes the needles to dissolve, delivering the drug to the wart.

The result is a highly targeted treatment modality that can be literally pain-free. “We know that based on the size of our needles, it’s less than a one out of ten on the pain scale. Most people describe it as a pressure. Once the needles melt—which has yet to be determined, but we’re thinking it will take only minutes—the patch is removed. There are no sharps so that’s another plus.”

He adds, “To make them even more palatable for kids, the WartPatches could have kid-friendly logos on them so they’re fun and not scary.”

In 2020, Durso and the VeraDermics team entered the Notre Dame McCloskey Pitch Competition. While they didn’t win, the eight-month process was extremely useful as the physician founders delved into the business side of their startup. Durso says one of the most valuable parts of the McCloskey Competition was watching the final pitches. “Doctors are not good at crafting pitches; it’s a different skillset from medicine. We definitely learned how to craft a pitch and talk with sophisticated investors.

That skillset came in handy when VeraDermics began its Series A fundraising round in December of that year. Up to this point, the company was funded by friends, family and dermatologist investors. When the round subscribed at $20.7 million, Durso was extremely happy as the funds will be used to advance the technology into clinical trials necessary for eventual FDA approval.

The raise is VeraDermics’ biggest success to date, a financial boost that provides a runway for commercial development. Durso is quick to credit his co-founders; their development partner Therapeutics, Inc., a contract research organization in San Diego, California; and the strategic partner that originated the dissolvable microneedle technology. Of the latter he says, “They didn’t have to work with us, but they believe in our vision and treatment paradigm. Working with them is extremely helpful.”

The road to commercialization is long, but Durso is optimistic about securing FDA approval by the end of 2025. “Both the treatment technique and the therapeutic are de-risked, which may get us an approval quicker and into clinics.”

Ultimately, the goal is for WartPatch to be available by prescription for home use. “Warts are very common, but many people don’t go to the doctor to get them treated because they think the wart will go away on its own, or they think the treatment won’t work, or they’re afraid of the pain. We believe WartPatch will lead to better patient compliance as it’s easy to use, and so much better than freezing or injecting a wart with a needle,” Durso says.

The biggest challenge is universal to startups: pushing the rock up the hill with a handful of people. And for physicians busy with their practices and families, the rock is often a boulder. Durso’s solution thus far has been to align VeraDermics with strategic consultants and investors who share the vision and help shoulder the workload. “We are fortunate to have people on the team and on our board who have done this before. That’s a big advantage for us.”

Durso offers this advice to other would-be entrepreneurs: You have to really love the concept of innovation.

“As a doctor and a dad, I’m very busy. A lot gets in the way of VeraDermics, but you have to make time. You also have to make sure you’re meeting the needs of all stakeholders. You can have a technology that works, earns FDA approval, and still fails. It’s very easy to miss the value proposition to key stakeholders. What has propelled VeraDermics forward to quickly is that our concept meets all of our stakeholders’ needs.”