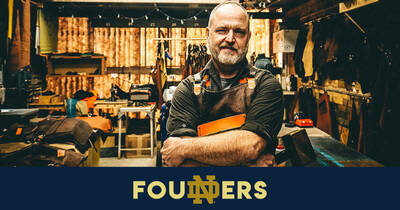 Looking back over his career, one that has taken him from working construction in high school to industrial design in Barcelona to the highest ranks of the corporate world and now to a very small, very satisfying family business, Michael O’Shaughnessy Williams shared an observation:

“Sometimes what you want is right there in front of you.”

But therein lies the rub. What do we want? How exactly do we find it?

As a young boy growing up in the small southern town of St. Matthews, South Carolina, Williams knew exactly what he wanted. And that was to build things. Instead of playing video games and watching TV games, he taught himself how to use power tools to build furniture and forts in the woods. Eventually, he worked construction jobs around town and learned what it was like to get really, really dirty.

He loved every minute.

The other thing Williams knew in the most absolute of terms is that he wanted to go to the University of Notre Dame for college. For any other teen in the land of Clemson Tigers and Carolina Gamecocks, this was downright heretical. Williams had his reasons.

“My father went to Notre Dame, and I grew up from the age of two going to Notre Dame football games. It didn’t matter that South Bend was more than 800 miles away. My parents would throw us kids in the back of the van and off we’d go,” he recalls. “I never considered going anywhere else.”

Arriving on campus as a freshman, Williams picked up on two things. It was cold as heck in South Bend, and he was no longer a big fish in a small pond. “At Notre Dame, everyone has the same credentials. It’s a level playing field of brilliant people, so you have to work harder.”

After earning his degree in Industrial and Product Design, something unusual happened to Williams. For the first time in his life, a life that up to this point was filled with certainties pursued with intentional passion and purpose, he didn’t know what he wanted to do. So he saved up some cash and moved to Barcelona, Spain, with the plan of touring around Europe for a year.

Williams’ plan changed when he met an American woman in Germany. Seeing something in the young man, the woman helped Williams secure a job in Barcelona as an industrial designer. “It was incredibly random,” he admits. “Soon I was designing for IBM, Hewlett Packard and Spanish tool companies. Like a lot of things in my life, the opportunity found me.”

Returning to the United States, he accepted a position with Stanley Bostitch selling nails and tools. Three years in, he decided to earn a Master of Business Administration (MBA) degree from Notre Dame. For Williams, the return to business school was life changing.  “It was like a Freakonomics episode. It opened my eyes to how global business works, the interconnectivity of it all, and showed me opportunities I’d never realized before.”

To this point, Williams’ life had revolved around tools in one way or another. But when one of America’s most iconic power tools companies, DeWalt, offered him an internship during his MBA years, he turned them down. Thinking there were more opportunities in big tech, he chose that route instead.

It was, however, a useful exercise as he discovered an inner truth. His heart was in power tools, and he had to get back to it.

Getting back meant joining Bosch where he researched and designed power tools from the ground up. “I was stunned and happy to discover I could get paid to design in the industry I loved. I thought, ‘It doesn’t get any better than this’” he recalls.

That was before a recruiter came calling with an executive position with an unnamed company. “There was only one other company I’d consider working for and didn’t think this job was it,” Williams says. “When the recruiter revealed it was Festool, a super-premium brand out of Germany, the Ferrari of power tools, I was all in.”

Williams assumed the role of vice president of marketing for Festool North America along with many other responsibilities. His first year with the company, the division did $12 million in sales in the United States. In year eight, sales in the United States had swelled to $90 million. It was quite an achievement given Festool’s products cost four to five times more than other tools. “The company grow by leaps and bounds, and it seemed that our marketing program was the biggest driver.”

His German bosses were ecstatic. And Williams? What was in front of him, building a legacy for someone else, wasn’t exactly how he envisioned his life playing out. He’d rather be building his own legacy for his family, which at this point included his wife Marie and four children whom he’d nicknamed, in true Southern fashion, Lovebird, Boozie, Handsome Boy, and Roscoe.

“I left Festool, not entirely sure what I was going to do. I thought I wanted to start a company with 100 or so employees. Big, but not too big,” Williams says.

As had happened before in his life, an opportunity presented itself out of nowhere. A good friend asked if he knew someone who could make him a leather work apron. “I began researching the market. The only thing I found were cheap, disposable cloth aprons from China. Here was a gap in the market,” Williams says.

“Although people have worn work aprons for hundreds, maybe thousands of years, the market for custom leather aprons simply didn’t exist. I wanted to make something for craftsmen that would last a lifetime. That became the basis for my company, Calavera Tool Works.”

There was just one problem. Creating a market means starting from scratch. Instead of designing and sourcing cheap leather aprons overseas, Williams chose a more hands-on approach: making his own custom work aprons. Using a 40-year-old sewing machine given to him by his mother, Williams taught himself how to sew. For the next year, he huddled over bison and cow hides, designing, experimenting, cutting, stitching, fitting hardware, testing. Doing it over and over again. At one point, he taught his eight-year-old daughter how to sew. He laughs at the memory. “It was sink or swim. I had to get it right. My kids had no idea why I wasn’t going to work.”

The funny thing was, Williams was having fun. When the orders began coming in for his custom work aprons, which start at about $300 and have gone as high as $1,500, Calavera Tool Works was no longer just a fun idea, it was an actual business with woodworkers, makers, barbers, and bartenders around the world clamoring for his aprons.

From the beginning, Williams focused on three things learned from previous corporate jobs and particularly his time at Festool that taught him how to win hearts and sales with super-premium products: product quality, clever branding and relationship marketing. “When people experience our previously unknown work aprons, I want them say, ‘How did I ever live without this?’”

Two years into Calavera Tool Works, Williams came to a crossroads. Up to this point, he had bootstrapped the company with savings and early revenue. An infusion of cash from the sale of another business would enable Calavera to pivot. Not to a different business model—oh lord no!—but to a new location.

“I started the company in our home in Indianapolis, moved to our garage and then to a makerspace in downtown Indy. Marie and I always wanted to move back to South Carolina. I mean, what’s the point of having your own company if you can’t live where you want? We now have a house that’s 300 yards from the Charleston Harbor and our shop is in the middle of the woods on neighboring John’s Island. I can have a boat in the water in minutes,” he says.

The move to Charleston in many ways poured gas on a fire. While Calavera Tool Works has a small following in Charleston, a historic city with a righteous share of high-end makers and craftspeople, the true advantage was its contribution to Williams’s marketing. Instead of using traditional print media, he has leveraged social media, in particular Instagram, to craft an irresistible and ongoing story about Calavera Tool Works. To date, the company has 40,000 followers on Instagram who have fallen in love with Williams, his adventures, his kids, Charleston, and oh, by the way, his work aprons.

One thing entirely unexpected is Williams himself has become the face of the brand. “Tool companies always focus on the tools. But here I am, coming to work in shorts or a bathing suit, often barefoot, with a couple of dogs wandering around. We use video narratives and storytelling to convey our brand. People want to see the process, the mistakes, and the hard work that goes into our products. They’re not just buying work aprons. They’re buying the story behind them.”

Williams’ eyes light up as he shares customer feedback. “People tell me all the time that with their apron on, they feel their superpowers. It’s like a backwards cape; wearing their apron puts people in their creative space and amplifies their skills.”

Originally, Williams envisioned a traditional company with lots of structure, employees, and as he puts it, “the whole nine yards.” Once he got into being a maker and experiencing the gratification of customers, he fell in love with running a hands-on business. There’s another aspect about Calavera Tool he adores. The team is just he and his wife and a part-time employee. Says Williams, “I love it when Marie walks into the shop in the mornings and I hate it when she leaves in the evening.”

These days Williams’ biggest challenge is how to create a sustainable business. “I thought I wanted something different until I realized this is enough. The kids and us have a great life. We have what we want. The questions now are: Will we still be doing this in 20 years and in a way that we still enjoy? I know we can grow but how do we keep things simple? How do we avoid going beyond the scope of happiness of a small business?”

For now, Williams has decided to keep Calavera Tool Works small and streamlined. The company’s sales are good —he just shipped a $9,000 order to the Netherlands—and is very profitable. He continues to innovate with different leathers but otherwise stays true to his original simple designs. He admits it’s not hard to stay motivated. “I have my shop. I chart my own course. I tell people how long it will take to get their order. They’re good with it and off we go.”

Asked for his advice to others who would like to start a company and he becomes philosophical. “There are so many cliches about finding what you love to do. What is it you love to do? Is it your own identity or being part of the corporate machine?

Many people approach their career as a financial decision. What’s most important is the short time you have on this earth and what you do with it.”