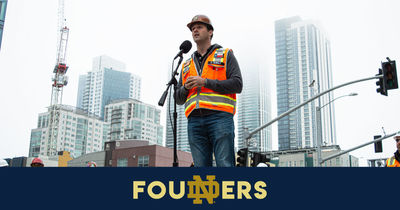 Drew DeWalt asks himself a singular question when faced with big decisions: “Of the options in front of me, which is going to afford me the opportunity to learn the most?”

Charting his own course led the Waco, Texas native to the University of Notre Dame instead of staying in his home state. It also inspired him to join the U.S. Navy nuclear submarine community where he earned the equivalent of a master’s degree in nuclear engineering followed by a four-year stint spending time underwater on a nuclear submarine. And, it inspired him to co-found two startup companies, neither a piece of cake.

That’s who DeWalt is—the kind of person who invites a challenge. He admits to pursuing new experiences because he wants to “learn more, do more and achieve more.”

His ethos began at an early age. DeWalt’s father and brother both served in the U.S. Air Force. Among his reasons for attending Notre Dame was its fantastic ROTC program, which prepares individuals to become officers in the military and is considered one of the best leadership courses in the country.

Though demanding, DeWalt discovered ROTC training coupled with the Fighting Irish experience was a strong combination for preparing him for life. “Notre Dame is academically rigorous; it’s very hard to do well there. What I walked away with, beyond my degree, was the discipline to do the hard things.”

Serving six years in the Navy’s nuclear submarine program was just one of the many hard things DeWalt would tackle. He describes living on a submarine as challenging, but rewarding. “Expectations to succeed were high; there was no easing into my role. When on a mission, you’re essentially on duty 24/7 for weeks on end. From a leadership standpoint, it was literally sink or swim.”

DeWalt eventually left the Navy to pursue a Master of Business Administration and a Master of Public Policy from Stanford University. From there, he launched a career in infrastructure development, largely in the oil and gas industry. While working in Chile, he teamed up with two fellow Stanford classmates. One conversation led to another and ultimately, they decided to start an ambitious renewable energy development company, Valhalla Energia.

“Here we were, three guys and a laptop working to fund and build a $1.5 billion power plant in Chile. It happened by chance, but in a way, it didn’t. My background was in nuclear power, oil and gas, and project management. My partners had their strengths. Like so many things in life, when you connect the dots looking backward, everything can seem like part of the plan,” he says.

DeWalt spent a year on the ground in Chile with Valhalla Energia. While there, he had another chance encounter with a former classmate from Stanford, Zach Scheel, who was working with Bechtel. Their discussions naturally centered on the construction industry, in which they both had experience and passion for. They knew firsthand of the lack of capable, modern project management software. A business opportunity presented itself and, says DeWalt, “We were naïve enough to think we could do something about it.”

In 2014, DeWalt stepped back from Valhalla Energia (he remains a shareholder) to found Rhumbix with Scheel in San Francisco. He soon discovered raising capital for a startup in a largely paper-based, tech-averse industry would be the biggest challenge of his career.

“We’re in the heart of Silicon Valley. Construction tech was not considered an investable space among venture capitalists. We had a hard time convincing them to look at our opportunity,” he says.

When not courting investors, DeWalt and Scheel built their Field Intelligence Platform™, a cloud-based mobile workforce management solution. The mobile and web applications that are part of this product provide a vehicle to collect field data, aggregate it and deliver it as actionable analytics dashboards. This creates near real time visibility into project progress, which helps to eliminate surprises between job execution and project plans.

The co-founders of Rhumbix are also focused on creating a company culture that is second to none; something DeWalt says is a “big point of pride.”

“Our common purpose is to put workers first, those in construction and our own people,” he explains. “Part of our mission includes Message to Garcia, a true story from the Spanish-American War where a young soldier is given a seemingly impossible task, but he’s empowered to do it and gets it done. We live this adage by hiring great people we trust, fostering a shared consciousness and empowering our people to execute at the local level.”

As the construction industry began deploying Rhumbix, Silicon Valley investors finally began to notice. In June 2018, the company received the backing of the Autodesk Forge Fund, an investment fund that partners with innovators to help accelerate the leading edge of technology. In June 2019, Rhumbix closed on a $14.3 million Series B investment round with participation from existing investors, including Greylock, Brick & Mortar, Blackhorn and S28.

Today, the company is the number one field software platform for the construction industry. Forbes named Rhumbix among the top ten veteran-founded startups in America. Yet DeWalt knows the company still has more challenges to overcome. “Startups are like climbing a mountain with a series of false peaks; there’s always another one to climb. You have to have the confidence to solve each new problem and see them as new opportunities. Fortunately, I like a challenge. It makes you who you are.”

Asked if he has advice for others who want to start companies, DeWalt paused, noting it was a “big question with no simple answer.”
“For better or worse, being an entrepreneur has been glamorized, which has led to the false sense that it’s fun and easy. The reality is starting a company is hard as heck; there’s no playbook. And it gets exponentially harder. You really just have to do it, jump in the deep end and create your own path.”

Which is exactly what DeWalt does best.