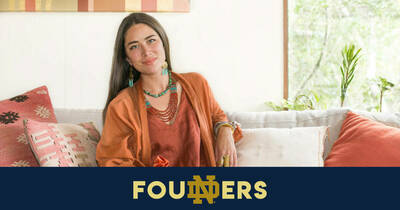 Stef Etow has always been a creative introvert, making art to make meaning of her world. “If you aren't the loudest voice in the room, you find other ways to communicate,” she says.

As early as age three, her distinctive sense of style made itself known when she would set aside her mother’s carefully chosen outfits to piece together her own. Later, at Santa Margarita Catholic High School in Southern California, she found ways to individualize her uniforms and was well known as a curator of accessories. She wasn’t necessarily rebellious; far from it. She just wanted to express herself.

Etow’s childhood also had powerful female influencers, namely her mother, who is of Greek descent, and her Japanese grandmother. Her mother kept a beautiful garden, working among the plants without gloves. Etow was fascinated by her mother’s hands, covered in dirt, encouraging her garden to grow. Her grandmother was a seamstress who didn’t follow the rules and made tiny, intricate outfits for her granddaughter’s Barbie dolls.

As she observed both women and the simplicities of life, Etow was filled with wonder and a sense of joy. “To this day, I love working with women who are passionate about what they do,” she says.

When it was time to choose a college, the University of Notre Dame was among her top two choices. The summer before senior year in high school, she attended a two-week “Summer Experience.” An amazing psychology professor and the warmth of the community at Notre Dame sealed the deal for her. The weather; however, was a bit of a shock. “The wind in the winter was a beast!” she recalls.

After graduating from Notre Dame with degrees in Art History and Italian, Etow was selected for prestigious internships at the Victoria and Albert Museum in London and the Whitney Museum of American Art in New York City. While at the Victoria and Albert, she worked on a female-led exhibition team. "I admired the knowledge of these brilliant women. They championed my intuition, so our work was all about this mutual trust. I learned that being a leader often goes both ways and is rooted in collaboration."

Etow also learned to appreciate how the spatial layout of a museum can influence the way viewers move through an exhibition, experiencing it as an interactive story. She continued this exploration with a master's degree at the University of Chicago, where she immersed herself in the world of art and design.

When she moved to San Francisco in 2013, Etow started her company, Ink and Pulp, as a creative outlet. She was working in a community engagement role for a media production company that supported student filmmakers and their social impact projects. The social media platform Instagram was new, and she saw how the site could be used to more intimately connect brands with communities.

“I would present my observations and insights around how we could nurture a more engaging presence among our student filmmakers, and I was repeatedly told that Instagram wasn't a priority. So I thought, why not create my own brand and test these instincts myself,” she says.

Etow focused her powers of observation on building Ink and Pulp. Slowly and surely, her own design aesthetic became more clear, more consistent, more recognizable. As it did, her community of followers grew. In 2014, Instagram named Ink and Pulp as one of the top accounts on its platform to follow. “Ink and Pulp is a creative sanctuary place where people come to slow down and be soothed,” she explains.

The simplicity of her visual meditations and her growing online community attracted major consumer brands like Everlane, J. Crew, Luna Bar, and Nespresso USA looking for a fresh new look. Etow delivered with branding campaigns she photographed and styled herself that were visually spacious and calming, depicting products with quiet impact.

Just as her aesthetic grew and evolved, so did Ink and Pulp’s offerings. Etow expanded beyond Instagram into a full creative studio, working with individuals and brands of all sizes on developing more elevated and cohesive visual stories for their brands. Her work has been featured in media outlets such as AdAge, InStyle, Forbes, and The New York Times. Her role in her clients’ lives is holistic, encompassing their business, emotional health, and self-awareness to ultimately create a brand that reflects who they are at their core. She explains her process as a transformation. “I bring all of the pieces of who they are together in a beautiful way.”

Considering how best to describe herself, Etow settles on a quiet observer and sensory sensing storyteller. “I create a safe space for people to share the deepest parts of themselves and their aspirations. And I listen deeply, translating this into a sensory experience that their community can connect with on a more emotional level. I have had clients ask, ‘How did you know what was in my heart?’”

Etow herself has evolved with each passing year at the helm of Ink and Pulp. She realized she is drawn to working with women who are community leaders, enjoying the role of partner to enhance their impact. Sample work on her website speaks to the power of her work. There is a visual intimacy and ethos that makes one want to explore and know each of her clients. “My ideal clients are leaders who are community-minded and are passionate about inspiring positive change in other people’s lives,” she says.

Her work speaks for itself and as a result, she has relied on word of mouth rather than paid advertising to grow her brand. “It’s fun to create for myself because I can be experimental with my photography and writing; it is my creative playground. People see this and want that feeling for their own brand,” she says.

In 2019, Etow began exploring a new direction for Ink and Pulp. The idea of an online design course to reach more people began to take shape. In her uniquely deliberate fashion, Etow allowed the idea to germinate and find its own form.

“The seed of this idea was a deep desire to impact more people with my unique philosophy of taking the branding process in a slow, methodical way. I was seeing how transformative it was, and since I only work with a few private clients a year, I wanted to be able to share my teachings with more people by giving them access to my art, my strategies and my teachings, all while moving at their own pace and in a more affordable way than hiring a design team.

In June 2021, after much contemplation and experimentation, Etow launched the “Slow Branding Sessions,” a 12-month guided experience where participants learn to “weave the threads of who they are into a tapestry distinctly their own.” The curated program includes  an interactive guide, monthly teachings, meditative practices, , and an original collection of photographs and designs. The Slow Branding Sessions, explains Etow on her website, “are an embodiment of the beauty that can blossom from this slow and deeply transformational journey.”

Four months in, she says the experience has been very rewarding. She has enjoyed advising the women in this first cohort, seeing them evolve as they find more clarity and awaken their dormant creativity. Her plan is to add a new cohort of Slow Branding every quarter. There is currently a wait list.

“I was very intentional about making Slow Branding a year-long journey. The spaciousness allows for moments of self-reflection that cannot be rushed, emerging on their own time,” she says.

Etow is sure of one thing. Slow Branding will evolve as time passes, and participants will walk away with something precious: a calmer, more intentional view of themselves and their world. “I’ve created a space to listen, to learn, to nurture. I tell women to slow down. Let things unfold. That can be difficult and empowering. Each month is different. Your inspiration will be renewed.”

Having cultivated a love of quietude and the practice of letting ideas develop in their own time, Etow offers this advice to others who want to start a company: “Don’t do what you think you should do. Instead, listen to your intuition. And what you do will be genuinely fulfilling.”