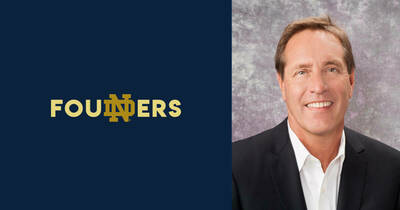 Open up the website of Nicholas Kuhn’s latest venture and you won’t find a medical device of healthcare-related technology this serial entrepreneur has made his focus for the last 30 years. Instead, you’ll be greeted by a gecko, one with incredibly large and sticky fingers.

So now Kuhn is selling insurance?

Far from it. The guy who followed his dad, a 3M executive, around the world and back as a child, has come full circle. He is now CEO and director of nanoGriptech, a materials science startup known for its multi-patented, dry adhesive and anti-slip technology that duplicates the micro-scaled fibular structure of a gecko’s foot, a lizard that can cling to most anything. And while the company originally developed its innovative material for industrial applications, to date its biggest success has been in consumer applications sold straight to customers on Amazon. It’s a far cry from Kuhn’s previous startups that took years, sometimes decades, to achieve commercial success.

But that, to Kuhn, is what makes life as a startup founder and CEO both interesting and fun. Even though nanoGriptech is unlike anything he’s ever done, because it‘s so intertwined with his family history it feels incredibly familiar.

Kuhn explains. “My father was a mechanical engineer who emigrated to the United State from Switzerland. He found a job as a tape engineer with 3M. He lived and breathed adhesives; for the next 38 years, he traveled the world as an executive for 3M. I was born in Australia and raised in Paris, Belgium, Japan, and London, Ontario. Adhesives were always part of my life.”

Kuhn might very well have followed in his father’s footsteps. He earned a Bachelor of Science in Chemical Engineering from the University of Notre Dame. But instead of taking a corporate job, Kuhn veered hard right and joined a startup in Minneapolis called LecTec Corporation that made a skin-compatible conductive material. While there, he did traditional engineering but dabbled in product development, ultimately earning a patent.

Bitten by the startup bug, Kuhn returned to school, earning a Master of Business Administration from the Northwest Kellogg School of Management in Chicago. Instead of joining another startup, Kuhn took a position with the multinational healthcare company, Baxter. While it was a great experience, he soon realized startups were in his DNA.

“Startups fit my personality better,” he says. “I want to be more than a cog in the wheel of a big machine; I want to make a bigger impact. After three years with Baxter, I joined ResMed, a startup that had spun out of Baxter. I was their first employee in the United States.”

At the time, ResMed was a $4 million company making medical devices for the treatment of sleep apnea, chronic obstructive pulmonary disease (COPD) and other respiratory conditions. Over the next four years, Kuhn helped scale the company in the United States market. Today, ResMed is a multi-billion-dollar company and the leading global manufacturer in sleep apnea therapy. Kuhn successfully exited the company in 1993. It was his first startup and his first big startup win.

“It really helps to have a good exit in startups,” he says, “so you have money for the next one and the flexibility to look around.”

Kuhn then proceeded to found or cofound a series of healthcare-related startups: Qualigen, a diagnostics company whose custom-designed analyzer featured a one-touch operation to perform complex quantitative immunoassays; ALung, which developed the Hemolung Respiratory Assist System, a dialysis-like alternative or supplement to mechanical ventilation; and Curavi Health, a post-acute care telemedicine play for the long-term care market.

During his 15-year stint with ALung, where he initially worked in exchange for stock, Kuhn raised $20 million in seed capital and played a key role in the company receiving a CE mark in the  European Union, clearing it for use. A difference of opinion on the company’s vision led Kuhn to resign. He is still enthusiastic about the technology, which is now on an accelerated approval track with the FDA. After standing Curavi Health up as a company and establishing its technology for the UPMC Enterprises incubator, Kuhn exited that role.

Not one to sit idly by Kuhn met with well-known seed financer  Innovation Works in Pittsburgh about companies in their portfolio needing a CEO. One caught his eye, nanoGriptech, a spin out of Carnegie Mellon University that had developed micro-fibrillar dry adhesives and surfaces for a wide range of product applications.

Says Kuhn, “I fell in love with nanoGriptech. It wasn’t medical, it was an advanced materials deal where market penetration can be difficult and lengthy. It was a new challenge; I took it.”

Fundraising is an integral part of early-stage startups. In its early days, nanoGriptech relied on government funding, competing for and securing $5 million in Small Business Innovation Research (SBIR) awards from the U.S. Department of Defense and National Science Foundation. Kuhn says while these awards are the lifeblood of many startups, the funding is erratic and dries up so startups must look to other investors or become self-sustaining through revenue.

nanoGriptech has done both. On the investment side, Kuhn successfully led the company’s $6 million Series A round in March 2020, a round that included $2 million from Taiwan’s Industrial Technology Investment Corporation, and $3 million from Inventram, a corporate venture capital firm. He is now in the midst of a $10 million Series B, targeting venture firms in advanced materials and consumer products. This in itself is a little different. Typically a company concentrates on one group of investors, but nanoGriptech’s strategy is to build a presence in both industrial and consumer applications.

“Industrial applications are ideal for nanoGriptech but the lead-time on B2B deals is very long,” explains Kuhn. “We’re working to penetrate the automotive and semi-conductor industries, which are highly regulated and where the quality standards are even more stringent than medical. Not only do you have to prove your material works and meets ISO certifications, but you also have to prove you can manufacture your material at scale. The payoff is multi-year contracts, giving you longer-term financial stability.”

The extended sales cycle of B2B sales has been exacerbated by the COVID-19 pandemic. With corporate teams working from home, the ability to take on new technologies has slowed. For this and other reasons, Kuhn, in true entrepreneurial fashion, has opportunistically embraced the consumer products market. In 2019, the decision was made to launch a suite of nanoGriptech’s own products on direct-to-consumer ecommerce channels like Amazon.

To do this the company created and launched consumer-facing brands that include Setex Gecko Grip®, and anti-slip technology that adds comfort and security to wearables, and Setex Gecko Tape™, a residue free, non-tacky tape that solve unique gripping, adhesion and fastening challenges current products can’t address. Its product offering on Amazon now includes nose pads for eyewear; grips for ear pods, game controller gripping solutions; gripper “kits” for all types of electronic devices; and grips for hand weights. New products on the horizon are grip tape for baseball bats, pickle ball and tennis rackets, and golf clubs.

The results have surprised even Kuhn. “We are currently selling on Amazon in the United States, Canada, Europe, Japan, and soon in South Korea and Mexico. The beauty of e-commerce is you can launch a product and immediately have 150 million target customers in the United States. Our eyewear nose pads have a 30 percent of market share on Amazon. Being able to launch globally, without the constraints of brick-and-mortar retail, has allowed us to drive revenue quickly.”

nanoGriptech is now looking at other ecommerce retail platforms. They’re also considering entering the optometry space. The traction the company has generated in just two years’ time has been extremely rewarding for Kuhn. ”I’ve really enjoyed learning about ecommerce and growing a consumer products company. The opportunities are endless.”

He adds, “nanoGriptech just may be one of the big ones.”

And that would be a fitting exclamation point to the career of an entrepreneur whose father was an executive in the adhesives industry for four decades. While he never imagined following in his father’s footsteps, this is about as close as it gets.

Not that Kuhn is through slugging it out in the startup trenches. “I’d like to keep working until I’m 70 and do one more deal.”

His advice to those who want to join him in the startup space is to “do it while you’re young.” Says the father of four and grandfather of three, “You have to have an appetite for risk and be willing to work for stock until you raise the money to pay yourself a salary. That’s tough! It helps to have a spouse with an income stream. This gives you more flexibility.”

He adds, “Understand your weaknesses and surround yourself with mentors with the strengths you lack. Startups are a team effort.”