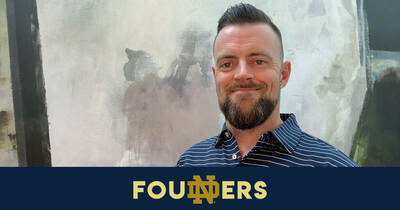 Each year, 1.3 million new cases of prostate cancer are diagnosed in men around the world. It’s the second leading cause of cancer deaths in men, with over 375,300 reported in 2020. African-American men are  particularly vulnerable; they are 1.6 times more likely to get prostate cancer and more than twice as likely to die from it.

Here’s the rub. If caught in the early stages, prostate cancer has a 99 percent survival rate.

Part of the high mortality rate may be due to screening tests themselves. Prostate-specific antigen (PSA) bloods tests yield a significant number of false positives as high as 75 percent, requiring unnecessary, costly and uncomfortable biopsies. Digital rectal exams, another method for checking the prostate gland, are also uncomfortable and often avoided for that reason.

University of Notre Dame alumnus Rob Tenniswood, co-founder of miR Scientific, may have a solution for the prostate cancer screening conundrum. His company is on the verge of commercializing a urine-based liquid biopsy test with data that shows the test has unprecedented accuracy for prostate cancer called the Sentinel™ Test.  It is the only standalone, non-invasive liquid biopsy urine test that accurately detects, classifies, and can monitor prostate cancer at the molecular level with 95 percent sensitivity and specificity.

Tenniswood reports the company is aiming to commercialize the Sentinel™ Test in fall 2021 and is building a CLIA lab in New Jersey to process the laboratory developed text. This category of in vitro diagnostic test does not require full approval from the Food and Drug Administration (FDA) as long as it is designed, manufactured, and processed within a single laboratory. miR Scientific is, however, pursuing full FDA approval.

So how is it that a Film and Media Studies major from Notre Dame is involved in what could be a game-changing disruption of prostate cancer diagnostics? Funny you asked...

In some ways, it all leads back to Notre Dame where Tenniswood’s father, Martin Tenniswood, Ph.D., was the Coleman Professor of Life Sciences from 1998 to 2008. Professor Tenniswood’s Biology 201 class was among the largest classes on campus, drawing upwards of 260 students per semester.

Tenniswood ruefully smiles at the memory. “I chose Notre Dame in part because my father taught there, but I definitely didn’t follow in Dad’s footsteps. I thought I wanted to ‘make art’ but it didn’t take long after graduation for me to determine the film and media industry didn’t fill my tank. I found myself gravitating to the business side of film and decided to earn a Master of Business Administration (MBA) at the Mendoza College of Business.”

Tenniswood found his time in the program transformative. “I set out to learn everything I could about business. I was fortunate to study abroad in China, Argentina, and Chile which exposed me to the nuances of doing business between cultures. It’s something I’ve carried forward in my professional career as we’re working to build a global team,” he says.

Another takeaway from his MBA years was learning how to solve problems in a methodical manner. “It’s a skillset I use every day,” Tenniswood says.

After graduation, he relocated to Vancouver, Canada, where he started a consulting business. Not having an established network, he decided to lean into the Notre Dame network by founding the Notre Dame Club of British Columbia, an alumni club within the framework of Notre Dame’s Alumni Association. After serving four years as president, he stepped back and is now the game watch coordinator.

“Not long after I founded the British Columbia Notre Dame alumni chapter, I met another alum who introduced me to a large company that ultimately became my first large consulting client. I kind of fell into it,” he says.

While working in his consulting business, another opportunity presented itself, this time from a known source: his father. At the time, the senior Tenniswood was director of the University of Albany’s Cancer Research Center in New York. He was trying to determine if prostate cancer could be detected at the molecular level. After much discussion, the Tenniswoods decided to start a business to develop the idea commercially, licensed the research that Dr. Tenniswood had been doing in his academic lab, and along with their co-founder and miR Scientific’s now-CEO Sam Salman, incorporated miR Scientific in 2014.

“Growing up with my dad as a cancer researcher, I didn’t have the patience for research; I like quicker payoffs. While at Notre Dame, I learned the path to solving complex problems is to break them down, challenge assumptions and go forward. Now it’s great working with Dad as we have completely different skillsets. We’re very collaborative,” he says.

While Tenniswood began working on miR full-time in 2014, his father remained part-time at miR Scientific until 2018 when the company had enough traction to hire them full time. They were and remain united by the drive to engage more men in prostate cancer screenings and potentially save thousands of men from suffering possible severe side effects of unnecessary prostate cancer treatments and biopsies.

“Very few men will say that want to have a prostate screening exam and many will simply avoid it,” Tenniswood says. “The beauty of our Sentinel™ Test for prostate cancer is all one has to do is pee in a cup—no pain, discomfort or embarrassment in that. And, the test offers unprecedented accuracy so we’ve also removed the fear of biopsy.”

Originally, miR Scientific planned to submit three separate prostate cancer diagnostic tests for FDA approval. When the COVID-19 pandemic shutdown their research laboratory in March 2020, something unexpected happened. The lull in business created more time for the miR Scientific team to really focus on their science. The net result was figuring out how to combine three tests into one. And that’s exactly what they did.

The payoff was immediate. The FDA awarded Breakthrough Status to the company’s Sentinel™ Test in October 2020, which serves to expedite the regulatory review process.

Tenniswood is quick to credit the miR Scientific team. “What we’ve done is extraordinarily difficult to figure out at the basic science level and on a commercial level. Our platform is truly unique.”

The very nature of prostate cancer has demanded a unique approach to diagnosing it. Unlike other cancers, most prostate cancers are indolent and therefore unlikely to ever need treatment. Only a relatively small number of prostate cancer patients have aggressive disease that requires intervention. The Sentinel™ Test is so sophisticated it is able to differentiate between the two, indolent and aggressive, quickly.  Until now there has been no effective, accurate, non-invasive test for early detection and grade classification of prostate cancer.

Which is why Tenniswood is so excited and the company is moving methodically forward to commercialization. In the meantime, miR Scientific is working with governments, insurance companies, and the American Urological Association to progress their test. The benefits to patients and to health systems in terms of better care and cost avoidance are nearly universal. In the rare instances of pushback from physicians, Tenniswood shows them data from their clinical trials and, he says, “They convert to believers.”

Up until now, miR Scientific has relied on private investors who understand the science and see the benefit. Tenniswood expects the company will hold a larger fundraising round soon. They are currently working on their pricing model.

Asked what has been the toughest part of his FouNDer’s journey and Tenniswood says it’s all been tough. His way of self-motivating is to celebrate each step forward. “I prefer quicker wins, but that’s not how science works. Giving up is not an option; we’re doing this for the greater good.”

He also offers this advice to future Notre Dame FouNDers. “Go have a cup of coffee with 100 different people. Get advice and direction from colleagues, friends, experts, and family. Learn how to solve problems because that’s what business is.  If you’re in Mendoza, take the Problem Solving class. If you can solve a problem, you can run a business.”

Tenniswood adds one last bit that he takes to heart. “Don’t get distracted by the end goal. Keep your head down and get the work done.”