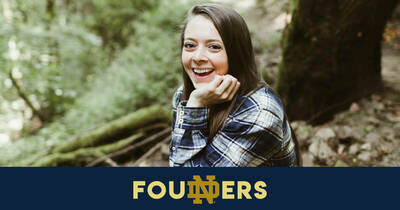 Emily Murphy has always been a sports-loving hustler. During high school in Portland, Oregon, she played tennis, volleyball and basketball. When it was time to choose a college, she only considered out-of-state schools in cold regions of the country (she doesn’t like hot weather), with longstanding traditions and ideally with a quintessential, self-contained college campus.

Oh yeah, there was one more thing on Murphy’s checklist: a strong intramural sports program.

Visiting the University of Notre Dame, she fell in love with the Dome, the quads, the lakes, and the breadth of the intramural sports program. Smiling at the memory, she proudly reports playing every intramural sport she could, even serving as quarterback of the Farley flag football team. “We didn’t make it to the championship, but we got close!”

Ever the hustler, Murphy also spent three years working in the Notre Dame Sports Marketing Department. Because the department was small, she was given a lot of responsibility and worked across most of the University’s varsity sports. It also fueled a love for the sports industry.

After graduation, Murphy moved to Minneapolis and took a job with big-box retailer Target. The transition from South Bend to the big city was easy—twenty other Notre Dame graduates accepted positions with Target at the same time. “We kept the Irish spirit alive,” she says.

While Target is a great company, Murphy says her first job was not necessarily her dream. “I was in merchandising for produce, ordering carrots and other produce. The perk was I got free vegetable samples.”

First jobs are rarely the stuff of dreams but Murphy viewed it as a steppingstone to a job more in-line with her interests. She spent her first two years at Target learning all she could about the business, networking with others while she patiently waited for the right opportunity. When an opportunity opened up in brand packaging, she jumped on it.

“Brand packaging is consumer facing and at Target that meant surprising and delighting customers. This was a much better job for me,” Murphy says. “I had to make sure that all of the information on our owned-brand packaging met consumer needs at the point of sale. It taught me several things: no detail is too small, customers come first and to always look at the store from a shopper’s perspective.”

Murphy quickly became a brand expert, but in March 2015 she was blindsided by a pink slip during a large corporate reorganization. Undeterred, Murphy found an interim job with an advertising agency before moving back to Portland to be closer to her family. She also hoped to land a job in the sportwear industry. Within five months, she’d landed a new gig with Adidas, the second largest sportswear brand in the world after Nike.

With Adidas, Murphy was in her element, starting in basketball and working with partners like Dick’s Sporting Goods and Footlocker to bring the adidas brand to life in their stores. She also worked with NBA stars like Damian Lillard, James Harden and Andrew Wiggins. The role was largely a project management position and, being a creative person, Murphy created a larger project for herself redesigning the multinational corporation’s hangtag system.

“I was shopping at an Adidas store and the tag on a shirt said medium but it was way too small for me. I realized it was a kid’s product but there was nothing on the tag saying that. So I spent the next year-and-a-half redesigning the way Adidas tags its products. Now every Adidas tag delivers the information customers need to feel confident about their purchase,” she says.

With a major design project under her belt, it would seem natural that Murphy would pursue a design career track within Adidas. Not wanting design to be her corporate job, she did something totally different. She joined the Adidas eCommerce team and founded her own company, Lakeside Paper Company.

“I began playing around with the idea of founding a design-oriented company on the side. I had always done projects for friends, including one for a friend from kindergarten that was a branding and marketing for a startup. Founding Lakeside Paper Company was a natural progression as a side hustle. I love paper, I love getting mail. So paper and cards were a natural. They are a tangible token of love and friendship,” she explains.

After spending a year reflecting on exactly what she wanted her company to be, Murphy launched Lakeside Paper Company in 2017. The name was inspired  by her favorite lakes: Lake Oswego in Oregon, Notre Dame’s two lakes and the 10,000 lakes in Minnesota. Murphy works in multiple mediums—watercolor, charcoal, pencil, and digitally using Illustrator and Photoshop—using premium paper stocks to create her whimsical wine labels, note cards, invitations, and nostalgic cards.

She purposefully started small, accepting projects from family and friends, and eventually began to build out a more robust presence on social media sites and her own website. Early on, Murphy took a course in search engine optimization so she could tag her products in ways that made it easier for potential customers to find her.

Although she has used Facebook to promote Lakeside Paper Company, her preferred platforms are Instagram, which she uses to preview new designs and share works in progress, and Etsy, the largest online marketplace for handmade goods with 4.3 million sellers and more than 39.4 million active buyers worldwide, which is her favorite platform.

“What I like about Etsy is people come to the site with the intent to buy. Most of my growth on Etsy has been organic; I am really careful about my keywords so people can find me.  I’ve supplemented that with some paid advertising,” Murphy says.

Although a primary goal when launching Lakeside Paper Company was to have a creative outlet she controlled, Murphy says she is also profit-driven. “I understand the value of my time and charge accordingly. I only accept custom jobs I want to do and always focus on the customer experience,” she says. As a result of her careful brand management, Lakeside Paper Company receives rave reviews from customers for her designs, quality and service, routinely earning five stars out of five.

Murphy says her biggest challenge with owning her own company is time. Putting in ten-hour days at adidas does not leave much time for Lakeside Paper Company and she doesn’t want work to be the only thing she does.

“A lot of people start side gigs because they don’t like their day jobs, but I love working with adidas. I also love the creative outlet of Lakeside Paper Company,” she says. “However, running a business like this isn’t just the fun of designing and painting. There’s the logistical pieces of the company like production, shipping, marketing, and taxes. All of this demands time and work. These things enable the fun part to happen. To be successful in a creative business, you have to do the pieces that no one sees.”

What keeps her motivated to pursue her side business despite having a challenging and very rewarding career with a major sports brand is in large part the personal satisfaction of controlling the creative process and bringing joy to others.

“You can send someone an email and it’s just an email. When you send them a unique, handmade card or invitation, it becomes part of a larger story. That’s why it’s such an honor for me when I do wedding invitations and other custom projects. I am creating connections and memories with my designs,” Murphy says.

Over the last few years there have been some challenging requests. One in particular put Murphy out of her comfort zone: a six-foot-tall map of Hyland Park in Minneapolis, complete with the entire trail system. “Now that was a creative challenge,” she says.

Seeking to test the waters of a larger commercial presence, Murphy created a wholesale catalog of card and wine label designs for the 2020 holiday season. After circulating the catalog among retailers, she got an order from her favorite shop in Portland. “Seeing my products on their shelves was very satisfying,” she says. “It was hard to be cool walking through the store. I kept squealing when I saw my things.”

What happened next was even better. The store reordered more of Murphy’s products. She plans a bigger push of her holiday catalog in 2021 while continuing to market direct-to-consumer through her social channels.

Noting the growing trend among young professionals to quit their day jobs to pursue other “YOLO” (you only live once) opportunities, Murphy offers a bit of advice. “Your hobby doesn’t have to be a business. The thing you love to do doesn’t have to be a money tree. I say that because having to do the business side in addition to the fun side isn’t for everyone.”

She adds, “If you do launch a company, decide what your brand is, define the scope of your business and stay consistent. Always remember the magic is in how customers interact with your product, not all of the work on the back end. With a customer-facing business, you have to get it right.”