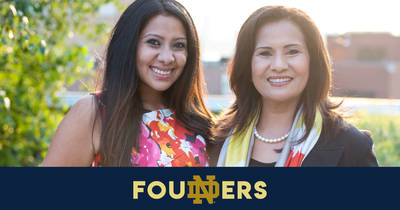 In some respects, it’s a miracle that Urvashi Keown found her way to the University of Notre Dame. She was born in India and thanks to her father’s career with American Express, raised in Indonesia, New Zealand and Singapore. It wasn’t distance that stood in the way. No, it was something more fundamental: her grades and SAT scores were not that great. Which was ironic as her mother was a teacher who had helped hundreds of high schoolers get into the university of their dreams.

Like many international students, Keown’s goal was to attend college in the United States. She and her family embarked on a tour of a number of prestigious universities. One immediately spoke to her. “The minute I stepped onto the University of Notre Dame campus, I felt I belonged,” she recalls. “Being realistic, I knew getting in wasn’t going to be easy.”

Back in Singapore, her high school hosted a college event and an admissions representative from Notre Dame was there. Keown devised a unique strategy to make up for her average grades. “I’m very personable so I decided to follow him around all day so he would remember me. Where he went, I went. It worked! When I applied, he remembered me.”

Still, she knew she wasn’t guaranteed a spot at Notre Dame and decided to shoot for a high SAT score to counter her unconventional academic records that simply stated “passed” rather than listing letter grades. Instead of having her mother tutor prepare her for the SAT test, Keown opted for “big box” test prep. It was, she says, a nightmare.

“I spent thousands of dollars and the experience was terrible. The test preparation material was standardized, and the problem is students are not standard. Each of us has gaps in our learning. I got so many test-taking tips that I panicked when I took the SAT the first time. When I got that first set of scores, I admitted I needed my mom’s help,” she says. “With her personalized tutoring, I got the scores I needed for Notre Dame.”

Little did Keown know the lesson learned from her very wise mother would come back into the picture and change not just her life, but the lives of high school students around the world. Really.

After graduating from Notre Dame, Keown accepted a job with Ogilvy & Mather, a top advertising agency in New York City. While it was an exciting place for a new grad, she was assigned to work on an investment banking product. Feeling she wasn’t making a difference in the world, Keown grew frustrated.

During a 20-hour flight to Singapore to visit her parents, Keown noticed a fellow passenger looking at her. Not a glance here and there; the woman was openly staring. Finally, near the end of the flight, the woman spoke up.

“Is Suniti Mathur your mother?” she asked. When Keown said yes, the woman said Mathur had been her college prep tutor and had literally changed her life.

“That gave me goose bumps,” Keown says. “Months before my mom said she wanted to reach more students and asked if I would help put her teaching online. I didn’t give it serious thought until meeting her former student and finally understanding the true power of her teaching.”

She adds, “And that’s when it all started.”

“It” is a company called TestRocker, a comprehensive online education platform for standardized college entrance exam preparation co-founded by Keown, her mother Suniti Mathur and her sister Sonali Mathur, also a Notre Dame graduate (2005). The name TestRocker was chosen because of the goal of helping all students “rock” their tests and get into the school of their dreams.

“No one likes standardized tests,” Keown explains, “but universities rely on them to determine if a student is prepared to ‘play at the college level.’ And while students can’t control the grades they earned freshman year in high school forward, they can control their SAT and ACT test scores. Hiring a test preparation service is an option. The problem is it’s typically a one-size fits all solution and so results vary.”

TestRocker’s approach, a combination of on-demand and live content, promises students will see an average increase of 200 points on the SAT exam and a four-point increase on the ACT exam, is customized to the student. A diagnostic test assesses each student’s strengths and weaknesses. A TestRocker consultant meets with parents and students and goes through an individualized strategy to fill the knowledge gaps and help students reach their full potential and maximize their scores.

What’s unique about TestRocker is that its platform is based on the knowledge and teaching methods of Suniti Mathur. Keown literally “bottled” her mother’s secret sauce using the digital production and creative development skills learned at Ogilvy & Mather. She and her mother worked tirelessly to create a digital library of more than 2,000 SAT videos and  2,000 ACT videos, each starring her mother. It was a rather intense labor of love.

“We hired a professional media director to record and edit the videos. Educators are such perfectionists we did each one at least four times,” Keown says.

The family has bootstrapped the company, carefully curating the business model and content. Before officially launching the company, beta tests were conducted with high school students who had used other test prep companies so they had a basis for comparison. The feedback was overwhelmingly positive and the TestRocker team continued to prep for launch.

Entrepreneurs are often advised to start small and then expand. However, it was important to Keown and her family that they be a global company from day one. Attending college in the United States as international students, they knew first-hand the desire and pressure on teenagers in other countries to gain admission to a U.S. university. These students often shoot for the top 30 to 40 elite schools in the nation, further elevating the pressure to “rock” entrance exams.

“We were those kids,” says Keown. “It is very, very difficult for anyone to get into top universities, let alone international students. We wanted to make it possible by showing students, regardless of where in the world they live, what to study, how to study and how to get their scores up in the 1500 range.”

Keown says the biggest challenge of TestRocker’s approach was being ahead of the curve with online tutoring. Recreating the private tutor experience online and gaining acceptance from families and students took years and finetuning their model. The TestRocker team has worked tirelessly to prove that their model is more effective than traditional test preparation.

The effort required to be global from day one and show each student the way to achieving high college admission test scores is through customized, online tutoring has paid off. Today, TestRocker works with students in more than 40 countries and has helped hundreds earn admission to top universities.

Last year threw TestRocker another curveball. During the global COVID-19 shutdown, SAT and ACT in-person testing sites closed and some colleges and universities waived entrance exams for the fall 2021 freshman class. Asked if entrance exams might permanently fall to the wayside, Keown is skeptical.

“Every few years there is a debate about doing away with entrance exams. A very few schools are test blind, meaning they don’t require SATs and ACTs, and a number are test optional. But two things are in play. First, and as an example, New York University received 60,000 applications last year. They and other universities need test scores to narrow down the number of applicants. Second, scholarships are often based on test scores. Entrance exams are likely here to stay,” she says.

As TestRocker approaches its tenth year in 2022, Keown has much to be thankful for. She and her husband Tim Keown (Notre Dame, 2010) are the proud parents of two and live in New Jersey. Her father and mother left Singapore and now live in New York City. Her co-founder sister and her husband, Aman Malik (Notre Dame, 2004) and children also live in New Jersey. They continue to finetune TestRocker and are provide entirely online delivery to families in the US and 40 other countries. The company measures success by their students ‘ test scores and seeing them light up when they achieve their goals.

“We had a student who really wanted a perfect score on the SATs. He worked on his own on TestRocker, went to help sessions with our tutors and worked really hard. When he got the 1600 that was a win for all of us,” she says.

Keown admits that as an entrepreneur, her mind is always racing on new ideas, but she holds herself in check by taking her own advice: “Don’t try to do too many things. Do one or two things well. Generate revenue and then expand. Always talk to your customers and listen to what they need.”