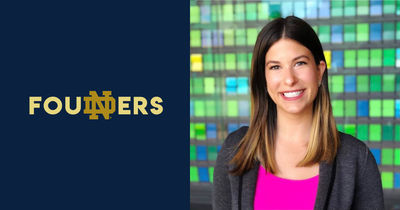 It’s often said that to be successful, an entrepreneur should have a passion for the pain point they’re trying to solve. In the case of Frankly Co-Founder Heather Eaton, she definitely feels the pain of her customers. Which is why the double-D cup who fights gravity, poor support, and discomfort on a daily basis is openly encouraging women to ditch their bras in favor of her company’s oh so comfy braless clothing line.

The University of Notre Dame graduate and first-time founder is unabashedly enthusiastic about solving the epic pain point of women everywhere and is doing so with a liberal amount of humor. The Frankly website is packed with puns and photos of attractive women in chic dresses and tops living life joyfully unrestrained. The carefully curated brand makes visitors want Frankly garb for their own girls. The brand officially launched in May.

“Women’s bodies come in all sizes yet we all have this common issue of discomfort with bras. We’re giving women with cups A-G the opportunity to ditch their bras in favor of our super supportive fashions they’ll want to wear every day,” says Eaton.

So how does a former Notre Dame Admissions tour guide and Deloitte consultant suddenly become a fashion mogul with a mission?

Growing up in Missouri, she liked the idea of starting a restaurant. Instead, she followed in her grandfather’s footsteps and attended Notre Dame, even living in the same room in Cavanaugh he’d occupied decades before. Falling in love with the University, she wanted to give back and became an Admissions ambassador tasked with touring parents and prospective students around campus.

“I learned some great life skills in that job,” she laughs. “I am very good at walking backwards. I can laugh at the same jokes over and over. But the biggest thing I learned is how people respond to enthusiasm and passion. Wear your emotion on your sleeve, show your excitement and people gravitate to you. They want to join you.”

After graduation, Eaton worked with Deloitte Consulting in Chicago. After four years, she headed to Stanford University to pursue a Master of Business Administration. It was there that she met Jane Dong, a neighbor, fellow student and ultimately co-founder of Frankly.

“Jane and I were taking a class called ‘Startup Garage’ where you learn the methodology of startups. “We needed a product or service as our class project. We pulled a bait and switch, starting the class with one idea before switching to Frankly and the idea of braless apparel.”

The two attacked their project with gusto. Early feedback was mixed. Some friends said there was nothing there while others admitted gravitating to clothing they could wear without a bra to escape the constraint. Even Eaton’s family, most of whom are in the medical field, was skeptical of her project. “They thought it was ‘interesting,’” she says with a smile.

At about the same time, Eaton was working for Rothy’s, a San Francisco-based company that makes comfortable, but stylish shoes and bags from recycled content. The company’s culture was in stark contrast to her high-stress days as a business consultant. “Rothy’s C-suite was experienced and very intentional about how they set up the organization. The company was mission-driven with a culture that was collaborative and healthy. They were producing a product women love. It was different from any company I’d ever worked for in the past and taught me to find my own star and follow it,” Eaton says.

Rothy’s became a guiding star for Eaton and Dong as they envisioned their own mission and culture for Frankly. When graduation day came, Eaton wanted to remain with Rothy’s while Dong wanted her co-founder to pursue Frankly full-time with her. Instead of flipping a coin, Dong suggested they do a quick test of their thesis on Facebook. “We posted an ad about going braless and the click-through rate was four to five times the industry average. Jane and I looked at each other and said, ‘There’s something here.’”

That’s when Frankly went from class project to full-fledged startup. Early on, their Stanford Startup Garage professors offered this advice: do things as quickly and as cheaply as possible.

Maybe it was her foundational years at Deloitte or simply intuition, but Eaton rejected the advice. “That works for software but not fashion. Women have to see the product and believe in it if they’re going to buy and wear it.”

Eaton and Dong pooled their money and flew to Los Angeles to source fabrics, cups, trim and elastic, and find other resources. They found a professional fashion designer on Upwork who helped create the initial pieces in their line. The designer knew people who would cut and sew samples. They next found a production person to size the lines. Finding a manufacturing was particularly difficult due to Frankly’s small volume.

“Setting up our supply chain was really hard. We spent eight months and a lot of money with our initial manufacturing partner before finding one that was a better fit. It was a hard lesson but we learned what was important and what wasn’t,” Eaton says.

Building their brand seemed more like a piece of cake due to the universal experience among women with uncomfortable undergarments. To create pre-launch excitement and build community, Eaton and Dong took to social media to engage women and build a community. Specifically, they took to TikTok and took the platform by storm amassing nearly 80,000 followers and four million views. This video alone snagged three million views!

Eaton says the TikTok videos have been successful because of the authenticity. “We focus on joy, happiness, the fun we’re having as founders, and our products. And it’s created profound excitement for Frankly.”

The final test before the launch was last fall when Eaton and Dong really put themselves out there with a KickStarter. The goal was to raise $25,000 and the 30-day campaign raised a total of $53,000 in non-dilutive funding. All expenses associated with the Kickstarter were fully funded within five hours. All in all, Frankly sold 200 dresses and 200 bodysuits. It was, says Eaton, their biggest success to date. Beyond the exposure and money, the Kickstarter gave them confidence.

As their brand and their first product line took shape, the need for capital grew. Eaton turned to investors in Chicago and Silicon Valley most of whom were men and, quite frankly, puzzled by the product. “They weren’t always sure how to take it; bras are not a problem for them. A few even said, ‘I’ll ask my wife about it.’ Between advocacy from the women in their lives, and our traction, we got investors.”

In the months since the Kickstarter, Eaton and Dong have hired a public relations firm to help position themselves amongst the millions of other small brands fighting for face time and sales. Social media continues to be highly effective as a means to engage with future customers, show what they’re working on and provide updates on the May 25 launch and what comes next, an expanded, follow-on line of braless apparel.

When not thinking of convincing women to go braless, Eaton and Dong think about who they want to be as a company and as a culture. Among their heroes is Sara Blakely, the founder of Spanx, who once fulfilled orders for her garments in her apartment late into the night alone. “Sara is an authentic leader” Eaton says. “People identify with her as a person and for solving a real pain point. We would love to be the next Sara Blakely.”

Meanwhile, being themselves—happy and full of purpose—is a fulltime job as Frankly is officially launched and helping women from all walks of life break up with their bras and find new support in the duo’s chic and freeing garments.

Eaton offers this advice to future founders, which goes back to her days as a Notre Dame Ambassador when she first unleashed the power of positivity on the unsuspecting masses: tell everyone what you’re doing. “Don't keep secrets. Don’t be afraid that someone is going to steal your idea. The more you talk and the more excited you are, the more people will listen and want to get involved. Put yourself out in the universe and good things will follow.”