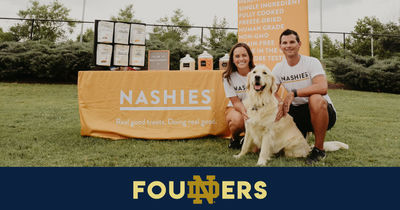 Over the course of the last decade, Sean Conlon has founded or co-founded five companies and had two exits. He admits he’s a startup addict and at one point dreamed of being the next Elon Musk or Mark Zuckerburg. He was always casting about for the next big idea, eager to make millions, when one day he was hit by a freight train (metaphorically speaking) and forced to stand still. That pause, that life-altering pause, ultimately led to Conlon and his wife Christina to sell ninety percent of their belongings and launch one last startup, one neither draws a penny in salary from.

It does seem antithetical to the man Conlon admits he was a hard-driving entrepreneur with his foot on the gas 24/7. Maybe it was the heartbreak of losing PetBox, a high-flying startup he founded that grew too quickly and was undercapitalized. Believing he’d found a strategic partner who could help PetBox stay afloat, it was that partner who tanked and left Conlon and his team hanging.

That hurt. It hurt bad.

Or maybe, just maybe, Conlon finally admitted to himself that something was missing in his life and he decided to pursue a lifelong dream and attend the University of Notre Dame, albeit as an executive Master of Business Administration (EMBA).

“At this point (2018), I’d been successful in business, made a lot of mistakes and was a person who lived in the moment. I decided I wanted to do Notre Dame’s EMBA program for several reasons: I’d always wanted to go to Notre Dame, it aligns with my values and finally, the program’s emphasis on leadership,” Conlon says.

He expected the program would be rigorous. What he hadn’t expected that during the first week, when the EMBA journey starts with a with a deep dive into a program called Executive Integral Leadership. The foundation of the program is a rigorous, quantitatively backed self-examination that requires students to discern their most important values, personal strengths and weaknesses. During this time, Conlon was stunned to discover he didn’t know himself. At all. That was his freight train moment.

“The Executive Integral Leadership program was a shock to my system. I had never before asked myself why I did the things I did,” Conlon admits. “I just ran and ran hard. It was so backwards; I never looked at the process. I didn’t realize that success comes slowly, that entrepreneurs stand up the company and then build a team to make it happen. That’s leadership and the people part of entrepreneurship and I was missing that.”

With this realization, Conlon settled into the EMBA program with a new perspective. “I finally learned the relational side of business, and that created an excitement and thirst to learn more about the people around me.”

One of the people he met was fellow classmate Steve Palmer, CEO and co-founder of Thrive Foods, a company in Salt Lake City that specializes in flash freeze drying foods. Palmer’s company had patented a technology that retains 99 percent of a food’s nutrients, color and texture. Intrigued, Conlon had a question:

“Have you ever made dog treats?”

Palmer’s answer: “No, but we’ve been working on that!”

Conlon filed this bit of intelligence in his mind, in part because he’s a dog owner in search of better food for his beloved family member, but also because he and his wife Christina had been noodling on a way to turn their shared passion for dogs, and in particular, therapy dogs like their English Cream Golden Retriever Nash.

“Christina is a social media consultant who is very good at building communities. She founded an Instagram account called @DailyBarker. Over a few short years, DailyBarker amassed more than 500,000 followers and a community of content contributors who shared inspiring stories of dogs around the world. We realized we had an opportunity to mobilize this community around a healthy dog treat company and use the profits to fund the training and placement of therapy dogs,” he explains.

With his wife’s loyal doggo community and his experience as an entrepreneur, it would seem the idea was the big “home run”  Conlon had been scrapping for all these years. But this time, something was different. Instead of asking how much money the couple could make, he had a new set of questions:

The couple arrived at the same answer: we can do this! We can be a force for good. Thus Nashies, a high-quality, direct-to-consumer, pet treat company was born.

There is a slight twist to this story. The couple was all-in on being a force for good. So in, in fact, that they traded their comfortable life in Nashville for a pickup truck and a 38-foot travel trailer so they could take their message and their dog Nash on the road to live the brand and spread the word at schools, police and fire stations, and informal “Yappy Hours,” all without drawing a penny in salary. Both Conlan and his wife draw salaries from their consulting businesses.

Wisely, Conlon returned to lessons earned at PetBox before the couple headed out in January 2021. For starters, many pet food and treat companies don’t make their products. They hire food processing companies and co-packers to make the products while they manage and grow their brands. He circled back to his friend Steve Palmer at Thrive Foods and asked if he’d produce their fully cooked, freeze fried treat at his “human” food plant. Palmer gave the Conlons an enthusiastic yes. They placed their first order for beef, chicken and cheddar cheese treat in February 2020.

The second lesson Conlon applied was to be patient, to walk and then run. There was a very important financial reasons for this. “Selling direct to consumer sounds like an easy business model, but the cost of customer acquisition is high due to marketing and you don’t make your money back quickly. Customer relationships are critical as you want them to be ‘sticky’ and keep coming back for more,” he explains. “Fortunately for us, Christina had a half million very loyal followers; we just had to use those relationships wisely.”

The third less applied was to respect the customer. “When dogs made the transition to barnyard to bedroom, everything changed. Dogs became family members. Prior to World War I, there was no commercial petfood. Dogs were fed scraps. Today people are seeking healthier foods for their pets because they don’t like the ‘dark side’ of some traditional pet foods and also because of a pet’s health issue that requires better food,” he says.

“With Nashies, there’s complete transparency about our ingredients and the fact that the treats are fully cooked and then freeze dried so there’s no risk of contamination or salmonella,” he adds.

As proof, Conlon admits he has eaten all three snacks, with cheddar being his favorite. Nash, his dog, prefers the beef. “Who doesn’t love a good steak?” he jokes.

Nashies dog treats officially launched April 2020 without fanfare and without paid ads. The Conlons have specifically throttled the launch to control growth. Instead, they’ve relied on their cross-country road trip and word of mouth. They are slowly introducing Nashies on @DailyBarker as they don’t want a half million dog lovers clicking on their site in search of the snacks—yet.

So far, their strategy is working. Reviews on their website are all tail wagers. Fans submit photos of their dog(s) with their favorite treat package and a glowing review. The only negative is the package is too small; they want more. Says Conlon, “It’s so refreshing that literally everyone is happy. That never happens with a startup.”

He says the Nashies adventure has been intimidating, scary, and exciting all at the same time. The Conlons bankrolled the company with their own money and it’s taken a while to become profitable. They are reinvesting their profits for now as they are planning the national launch of an equally healthy freeze-dried dogfood in September that pet owners reconstitute with water before serving their dogs. Conlon says there is no other  fully cooked, freeze-dried dog food on the market.

Asked why start a cause-based company that is focused on radical generosity and Conlon says that it all goes back to living one’s faith and one’s values, something he calls selflessness rather than selfishness. He says simply, “You can do this. We’re doing this.”

His advice to other would-be founders is to know yourself before you jump. “That was my biggest mistake with the previous companies I started. I didn’t know myself and I had negative patterns of behavior I could have avoided. Make sure you get honest evaluations from family, friends and employees. Find your weaknesses and adjust. Finally, look at what you want your life to be 10 and even 20 years from now.”