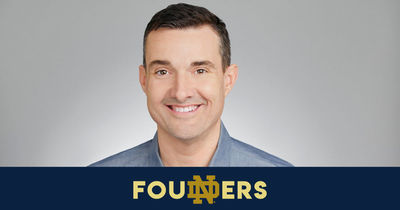 Meet Rob Eyler and you notice two things. He’s the picture of health. Trim. Athletic. He also exudes a positive attitude. Here’s a guy who enjoys pushing the proverbial rock up the hill, no matter how big the rock or how steep the hill.

As with everything, there is more than meets the eye with Rob Eyler. Over the course of his life, he has endured much and a few times has literally hit the wall. And yet he continues to persevere whatever hand he’s dealt. That takes character. That takes faith.

Growing up in Carmel, Indiana, Eyler was a sickly kid, constantly in and out of Riley Children’s Hospital in Indianapolis with an autoimmune disease. He remembers his childhood being full of allergy shots and medications.

His mother, a nurse, encouraged him to go to the University of Notre Dame. “Great doctors and lawyers go to Notre Dame,” she told him. “It would be a great accomplishment if you could go there.”

Eyler tucked that advice away and eventually earned a degree in finance from the Indiana University Kelley School of Business. He went to work with his father at The College Network, an e-learning business based in Indianapolis, building the company up to $100 million in revenue. Excelling at work, Eyler neglected his health. His weight ballooned to 300 pounds. At one point, he  was taking up to ten prescription medications a day.

In 2018, with a stressful job and young family, he decided to take his mother’s advice and go Notre Dame. He enrolled in the Mendoza College of Business’ Executive Master of Business Administration program.

“My biggest takeaway was the program’s mixture of business and values, and that we can fuse faith and commerce,” he says.
There was also something deeper. “Notre Dame inspired me to take a leap of faith and follow my dreams.”

While at Notre Dame in 2011, Eyler traveled to California for a natural health summit. And it was while there he finally realized he couldn't medicate himself out of his health issues. Listening to the speakers, the message came through: only diet, exercise and determination would allow him to reclaim his life. Back in Indiana, Eyler made an important investment in himself: he gave up all of his prescription drugs and over the course of three years, shed 125 pounds. He became active in the administration for his son and daughter’s Boy Scout troops. He has also kept the weight off for more than a decade.

Following his dream also meant a radical shift in his professional life. Leaving the family business, he founded and led two chiropractic-alternative wellness practices in Wisconsin and Carmel, Indiana. During this time, Eyler began advising a former classmate from Cathedral High School In Indianapolis, Brian Confer, who had founded a trendy mobile photography business called The Headshot Truck serving people and companies in Los Angeles, New York City and Atlanta.

“There were some problems with the business model. The Headshot Truck was and is a neat idea. It became a popular attraction at conferences and conventions in Los Angeles as well as on the streets of Southern California with aspiring actors but just wasn’t getting the consistent traction it needed to scale,” Eyler says. “As someone who has owned and scaled professional service businesses, I thought there was an opportunity to serve clients large and small with consistent photo and video content on demand but without the cost  of a truck. Businesses know they need to invest in authentic content to grow but often fail to invest money in marketing because getting it wrong is so costly.”

The discussions led to a new model which ultimately led to the founding of a new company, Capturely, in October 2019. The idea was to provide on-demand photography and video content creation to businesses across the United States for use on websites, social media accounts and overall online presence. This included digital imagery, stills and video, of people, places and products delivered in multiple formats but always specific to the client’s visual brand.

“What we are doing is simplifying the creation of digital content and doing so in a very cost effective way, but in a way that also elevates the final product, the photo or video,” Eyler says. “I remind people there is no profit in plane tickets.”

To make the model work, Capturely also had to recruit professional photographers and videographers to the company. The main benefit is the photographer/videographer gets to focus on the creative side without the hassle of constantly having to find clients and handle the complexities of scheduling, billing and collections.

Businesses liked what they saw and Capturely soon boasted an impressive list of clients that included LinkedIn, AllianceBernstein, Disney, Fox, Facebook, and Lyft. The business hit an unexpected roadblock in March 2020 called COVID-19.

The global economic shutdown, which began over a year ago and continues in some states today, was almost the end of Capturely. The reason was simple. The last thing anyone was thinking about while stuck at home “flattening the curve” was having a portrait taken or creating other commercial photography. Capturely was dead in its tracks.

Looking back, Eyler says there were many sleepless nights as he worried about cash flow and holding the company together until the world came back online. The fact that Capturely is still here and has turned the corner into profitability again amazes its CEO. He points to his team—whom he calls the Band of Brothers and Sisters—as the glue that held the company together.

“Our team is amazing,” Eyler says. “And I give 100 percent of the credit to the way we treat each other. There’s a lot of love and respect between us.”

The business slowdown did have a positive side. It gave Eyler an opportunity to develop a new revenue model that ultimately would make customers more sticky, revenue more predictable and the customer experience more positive. Although Capturely’s customers can still engage the company for one-off photo and video projects, they can now engage Capturely in two categories of service, corporate photography and videography and product photography.

When the new revenue model launched in late April 2021, Capturely quickly landed three large, enterprise level clients, including Finance of America Companies which has 5,500 employees and 300 global offices. More clients are in the pipeline.

Eyler says the response is better than they anticipated, but the client response has been the same. “They thank us for making budgeting for and buying digital content so much easier.”

Clients are also appreciative of the fact that Capturely is happy to serve as the creator and keeper of their digital brand, creating style guides to ensure lighting, angles, colors, and other aesthetics are consistently maintained across all photo and video sessions. This is just as important to big brands with locations across the country as it is to local businesses like law firms or medical practices. Capturely also maintains digital archives of clients’ videos and photography.

Another value to enterprise clients is Capturely not only works with the corporate office, but it also works with regional and local offices or franchisees, to deliver consistent, highly, on-brand images and videos. And if something’s not quite right with an image, Capturely will fix it.

Now 16 months beyond the original COVID-19 shutdown, Capturely is finally clicking along. The company is attracting new clients that want great digital content. They’re also recruiting more photographers and videographers across the county who want to represent Capturely in local markets on a gig basis. In less than two years and despite the forced lull of the pandemic, Capturely has completed more than 2,000 photo shoots, photographed 10,000-plus people and delivered some 200,000 images and videos.

When asked what his biggest win with Capturely has been to date, Eyler is all over the place, generously heaping praise on his team, his clients, and his high school sweetheart, whom he married. He then pauses before speaking again.

“During COVID, I felt like I couldn’t go any further; it was too hard. A voice told me to get up and go. So I have to say the biggest win has been my faith.”

He is generous with his advice to other future entrepreneurs. Smiling, he says, “It is so much easier getting paid and having a 401(k). If you start a company, have a passion for what you’re doing. Be resilient. Have grit. And it’s always better to be lucky than good.”