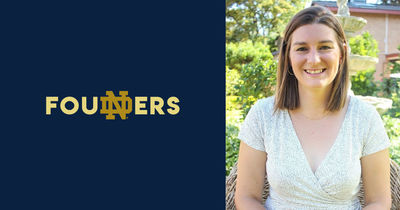 Adele Bruggeman is a world away from her hometown of Cincinnati, Ohio—8,268 miles to be exact—living her dream in Cape Town, South Africa.

Was she lucky enough to land a high-powered job in finance after graduating from the University of Notre Dame? Or perhaps a job in tourism? Cape Town is, after all, a major destination for leisure travel. Or maybe she’s a tech entrepreneur?

The answer is no, no and no. When Adele Bruggeman followed her dream to South Africa, it was to live a life of service. Since age ten, when she told anyone who  would listen that she wanted to work at the United Nations, she has nurtured a passion for improving the lives of others. And it was while volunteering as a lacrosse coach for girls in Kampala, Uganda, the summer before her senior year at Notre Dame, that she caught the spirit of Africa and ultimately found her place to do good.

Today, Bruggeman is the founder of ActivateHer, a nonprofit sports development initiative she created from scratch in Khayelitsha, the largest township in Cape Town, South Africa. ActivateHer uses sports to teach girls from under-served communities between the ages of three and 14 about leadership, self-awareness and confidence, the importance of physical health, and other valuable skills. As advocates for the rights of girls and young women across South Africa, ActivateHer provides a safe and healthy learning environment for play with the ultimate goal of preparing them for economic independence and social resilience in life.

Bruggeman’s use of sports to create opportunities for girls is rooted in her own childhood. “I think I played sports before I could walk,” she says. “My mom is a gymnastics teacher so I grew up in a sporty environment. I played soccer and lacrosse—always goalie, the toughest position. I loved the team aspect of sports.”

She brought her love of sports to Notre Dame where she competed on the varsity lacrosse team. Bruggeman was also drawn to the Center for Social Concerns, which encourages students to put the Catholic social tradition into practice to address poverty, injustice, and oppression in the world. She graduated from Notre Dame with a degree in sociology and headed to Africa to start a career in international development in the nonprofit sector. Little did she know one day soon she would start her own nonprofit.

The seed for ActivateHer was planted during her early days in Cape Town. Although it is a sophisticated, modern city, Cape Town, like most of South Africa, is very patriarchal. Girls, especially those in low-income townships, do not have the same experiences, let alone opportunities, as boys.

“We were driving around Cape Town and I saw little boys outside playing games and having fun. I asked, ‘Where are the girls? Why aren’t they outside playing?’ I was told that in marginalized communities girls have more responsibilities. Even at a very young age, they are cooking and cleaning, taking care of younger siblings while their parents work. There’s no time to play,” Bruggeman explains.

There was another, darker reason girls weren’t outside. South Africa is said to have the highest statistics of gender-based violence in the world and some of the highest incidences of child rape. The Tears Foundation states half of South Africa's children will be abused before the age of 18. One in three girls become pregnant before age 20. Young women also contract HIV at twice the rate of young men.

Says Bruggeman, “The reality is the community you are born into influences your future.” So she set out to change the community through sports.

“There are things we innately learn through sports like leadership and lessons like excuses don’t work in sports, you have to show up for the team, be present and in the zone. Coaches occupy a powerful position to not just to teach a sport, but to link sports to life,” she explains. “Girls need safe spaces to be themselves and find themselves. This is where ActivateHer comes in.”

With the help of local donors, Bruggeman launched ActivateHer in 2018 at a girls school in Khayelitsha. The free program is open to girls in pre-school through primary school and focuses on the immediate joy of sports and longitudinal impact of empowering women and closing the cycle of poverty.

The curriculum is geared to the age of the students. For girls ages three to seven, the focus is on developing their gross motor skills, balance, and coordination so Bruggeman uses dance, gymnastics and yoga—activities little ones love—to discover their bodies and simple concepts of health. The approach is slow and repetitive to help the girls build confidence without pressure.

At age eight, Bruggeman introduces structured sports like soccer, cricket, and netball where the girls learn rules, the importance of team and responsibility. Health information, including nutrition, puberty and reproductive health, are discussed to help the girls respect themselves, create a stronger sense of self and take control of their bodies.

This information is very much needed in South Africa where puberty is not openly discussed. “Girls may not have a female figure in their household they can talk to about these things. Or, they may have a granny who won’t talk about reproductive health. ActivateHer is a girl-centric space where we can discuss things and answer questions girls need to stay healthy and safe,” Bruggeman says.

ActivateHer currently has 110 girls enrolled in the program, and Bruggeman plans to expand it to include high school girls to teach functional fitness, develop life skills, and how to build a  lifelong health and wellness routine. Upon graduation, girls can continue with the program as coaches and gain experience that can help secure a future job.

Bruggeman also plans to expand ActivateHer to other schools but as with any nonprofit, funding is a challenge. Although she has a loyal donor base, one that includes the Two Oceans Marathon which donates proceeds from its annual race to ActivateHer, fundraising consumes much of Bruggeman’s time. This has led her to question why nonprofits don’t operate more like a business.

“We’ve made a commitment to our girls so we can’t just stop. Instead, we need a more sustainable financial model,” she says.

To that end, Bruggeman has done two things. First, she will be graduating this year with a master’s in business administration from the Quantic School of Business and Technology In Cape Town. Second, she is starting an ecommerce business, Her Active, the social enterprise arm of ActivateHer that will sell sportswear made in Cape Town. The plan is to launch with a Kickstarter and pre-sell a line of leggings, bike shorts, sports bras, tee shirts, and hats all made of recycled material to get the business  off the ground.

The target market is America, which has embraced conscious consumerism and is more open to paying higher prices for clothing. Profits will be used to put ActivateHer on more sustainable footing and less dependent on donations. The other benefit is job creation. Bruggeman will employ local women through a sewing coop while teaching entrepreneurial skills to others that will open new doors to careers.

Bruggeman smiles at hew new-found business bent. “My parents wanted me to get a business degree at Notre Dame but I was idealistic. I should have listened!”

The biggest challenge of starting a nonprofit, says Bruggeman, has been learning by doing and bootstrapping everything she does. “Other organizations have access to seed funds and can get up and running easier. I volunteer my time to ActivateHer and much of my energy is spent fundraising. Rather than program building. Hopefully, that will change when Her Active launches.”

The biggest win for Bruggeman is seeing the impact on the girls themselves. The little ones are happy and naughty as little girls should be. The real transformation is in the older girls. “I had just started a class of 13 year olds and asked them what sports they’d like to play. They were quiet; they had no idea what they wanted. So we started with dance and yoga. Once I introduced them to boxing and volleyball, they didn’t want to do yoga anymore. They wanted to box. It was amazing to see the mindset shift when they started to activate.”

She continues, “It’s rewarding to see girls step up and develop an enthusiasm for being leaders. We’re not trying to create sports stars. We want leaders in every space.”

Bruggeman admits founding a company can be lonely and isolating and encouraged others who want to start a social enterprise to first see who is already doing what you want to do and then ask if you can help them. “See what you can learn and then map out what you want to do. Also, listen! We don’t do enough of that. Listen to your beneficiaries. Listen to the community. Lead from there.”