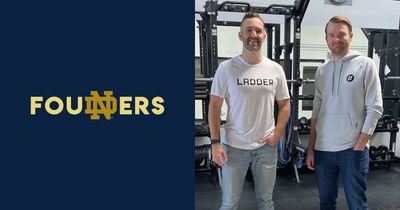 The University of Notre Dame is well known for sparking lifelong friendships. In the case of Tom Digan and Greg Stewart, their shared appreciation of Notre Dame sparked something more: a deep level of trust that led to the successful makeover and relaunch of Austin-based startup, Ladder Teams.

Both credit their families’ passion for Notre Dame for bringing them together. Growing up in Boston, Digan cheered on the Irish alongside his grandfather, a Notre Dame alumni. Stewart’s Irish-Catholic family were also Notre Dame fans and to this day, he makes a point of attending at least one football game a year on campus with his dad and younger brother.

The two met while pursuing business degrees and became friends. After graduation, both headed for New York City to start their careers in finance. Digan joined Sorin Capital Management while Stewart opted for Deutsche Bank. Over the next five years, the two would meet up in the fall to watch Notre Dame football games. When Stewart moved to San Francisco in 2012 with Goldman Sachs, the two stayed in touch.

Eventually, Stewart traded his investment banking hat for a more entrepreneurial path, quickly becoming CEO of a real estate software startup in Austin and then as chief operating officer and a founding team member of Austin, Texas-based Bungalo, a consumer-facing real estate technology platform. Stewart fell in love with building game-changing consumer products and teams, which he says, “was way more exciting and fulfilling than building spreadsheets.”

Meanwhile, Digan was now a partner with Sorin and head of portfolio management and trading. He also felt the pull of startup life, becoming a co-founder and initial investor of then Boston-based Ladder, a digital fitness startup. He eventually joined Ladder full-time as president and led the company’s relocation to Austin, a top destination for tech talent and active lifestyles.

“The goal was always to build a disruptive consumer-facing brand along the lines of Uber, Dollar Shave Club and Airbnb,” Digan says. “However, shortly after moving to Austin we realized that we didn’t have the right team to fulfill our vision.”

Soon after arriving in Texas, Digan reached out to his old friend who had recently moved to Austin from San Francisco. Over breakfast, he and Stewart chatted about Ladder’s progress and strategy. Stewart wanted to learn as much as he could about the opportunity ahead.

“As I got deeper into the fitness business, the more excited I became,” says Stewart. “Having been front and center for the digitalization and consumerization of the real estate industry, I saw direct parallels to Ladder and the fitness industry. The meteoric success of Peloton proved it was possible to build a generational company in fitness if you focused all of your efforts on delivering exceptional consumer experiences leveraging cutting edge technology.”

After a few months of brainstorming, Digan convinced Stewart to join him at Ladder in November 2019 and to help the company build a world class team and world class products. It was soon clear that the original business, an app that connected personal trainers with people looking for personal training, was not the best path forward. Digan, Stewart, and team learned that a tech-enabled consumer fitness subscription product works only if you can maintain the quality of the coaching and workout programming, which was difficult with many independent coach partners across the country.

Digan explains. “A key piece missing from our original product was community. Creating shared experiences and social accountability and motivation is incredibly powerful in fitness. We had been testing team-oriented training products and saw really strong signals this approach worked. We decided to go all-in on a major pivot, moving away from the business the company was founded on and instead focusing on a smaller group of elite coaches and a team-oriented training experience. One trainer would work with a large number of people; the coach and team would both create accountability and motivation. And we’d deliver this with a best-in-class, press-and-play workout experience, with a focus on strength programming.”

With a new vision in place, the team got to work building Ladder Teams from the ground up. Then COVID-19 hit and Digan and Stewart had to make things happen with a fully remote organization with many people had just recently joined the team and at a time when collaboration and connectivity was mission critical to building the new business.

Exactly 100 days after locking in the plan, Ladder Teams officially launched on the App Store in July 2020.  The Ladder Teams offering took an entirely new format and experience: globally recognized, elite coaches who deliver high-quality workout programming into the app each week. With the Ladder Teams app, members have access to a complete strength training program on their phone. Like the popular Spotify app, which Ladder Teams integrates with, members simply open the app and press play to start the day’s workout. While the app removes all the guesswork from maintaining a progressive training program, if a member wants expert guidance, they can chat directly with coaches in the app. Many features are inspired by social media and designed to bring users who share a passion for fitness together.

“Our members come for great workout programming and coaching but they keep coming back because of these shared experiences and human connection fostered inside our unique training programs and communities,” explains Digan.

While developing and launching Ladder Teams during a global pandemic was unexpected,  it also worked to their advantage. Due to COVID-19, gym enthusiasts were largely locked out of their physical gyms and open to new, online options to help continue their workout regimes at home. To jumpstart awareness, Ladder Teams helped its coaches promote the launch and their Ladder Teams programs on social platforms like Instagram. Both Digan and Stewart also spent time with traditional media to amplify the company’s message.

The launch came with a strong group of initial users and some surprises. “When we realized people were going to be using Ladder Teams at home due to the pandemic, we knew we needed to stand up an equipment shop to make it easier for members to purchase hard-to-find fitness equipment that was largely out of stock across the country because of the sudden surge in demand. We worked quickly to source kettlebells, dumbbells, and bands and sold them at cost to get people up and running from home,” Stewart says.

Nearly a year later, Ladder Teams is growing rapidly, new coaches and software tools have been added, and the experience continues to improve based on rich user data and direct feedback from members and coaches.  Says Digan, “We’ve had literally hundreds of conversations with our users, most of whom are very serious about fitness and appreciate the Ladder Teams community. We’ve become their fitness family, with real relationships developing between strangers meeting in the app and supporting each other throughout their fitness journey.”

Today, users can download the Ladder Teams app from the Apple App Store or scan a QR code on the company’s website and get a free seven-day trial to find the perfect training program and team. Notre Dame alumni can take advantage of an additional special offer, 15 percent off a membership, by visiting the company’s website and after completing the free trial, entering the coupon code GOIRISH15 at checkout.

Digan says Ladder’s biggest win to date was “convincing Greg to hop in the Ladder boat with me and then bring in a group of incredibly talented new teammates, each having worked with Greg at prior companies.”

Not surprisingly, Digan’s advice to future FouNDers is to find a great co-founder, get comfortable with ambiguity and things not going as planned, and don’t stop. “Any one thing might feel like the world ending but it very rarely is...keep going.”

As for Stewart, he offers this advice: “It’s going to be 100 times harder and 100 times more rewarding than you think. Focus and prioritization are key; pick what matters most and point the entire team at that and run hard together.”