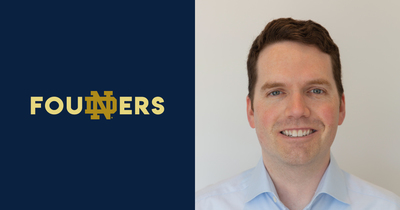 Joseph Connor always dreamed of being a teacher. After graduating from Duke University, he jumped right in, teaching elementary education in public charter schools in Washington D.C. and Philadelphia before heading to San Jose, California, where he wanted to start a charter school in a low-income minority neighborhood.

“I saw a need to help increase proficiency in reading and math, particularly among kids where English was their second language,” recalls Connor. “I didn’t expect opposition, but the local teacher’s union denied us the right to open a school.”

Stunned, Connor returned to the classroom. Not any classroom—he applied to and was accepted by the University of Notre Dame School of Law. “I realized that if I wanted to start a school, I needed to understand the legal framework for how to open and operate schools.”

Arriving in South Bend, Connor set about building a “war chest” of knowledge and first-hand experience that would ultimately lead to his launching a transformative education model. Here is what he did.

He became a research assistant to one of his law professors, Nicole Garnett, who has a deep interest in school choice and is the author of the book, Lost Classroom, Lost Community: Catholic Schools' Importance in Urban America. He served as a consultant to the Alliance for Catholic Education at Notre Dame, a nonprofit that seeks to strengthen Catholic schools, recruit future leaders and teachers, and bring opportunities to disadvantaged children. He squeezed in two externships: the first with the startup AltSchool, helping build out their 50-state strategy for micro schools, and the second with Match Education, a network of charter schools in Boston.

Connor also found time to serve as an assistant rector for Siegfried Hall, overseeing 200 undergraduate students. These experiences, carefully chosen and deeply immersed in the challenges facing alternative schools today, kept his dream of teaching and starting his own school alive.

With law school winding down, Connor realized that before returning to education, he needed the practical knowledge of a law firm environment. After graduating from Notre Dame Law, he worked at a law firm for four years, gaining experience in education regulatory work and litigation. The icing on the cake was working on Espinoza v. Montana Department of Revenue, a United States Supreme Court case in 2020 with the Faegre Drinker law firm.

The State of Montana passed a tax credit scholarship program for low-income students to attend private schools and barred the use of scholarships for any religious schools. This regulation was challenged by three low-income families on the grounds that it discriminated against them due to their religion and was therefore unconstitutional under the First Amendment. The case was ultimately appealed to the Supreme Court, which ruled in favor of the students and held that the regulations violated the Free Exercise clause of the First Amendment. Our firm submitted an amicus brief on behalf of a nonprofit in support of the students. It was definitely a highlight of my legal career to be involved in that case,” Connor says.

While working as an attorney, Connor was also advancing a startup company near and dear to his heart: SchoolHouse. The SchoolHouse model connects small groups of parents and teachers to form educational pods—sometimes referred to as micro schools— to provide in-person instruction to groups of no more than eight elementary or middle school students. Classes are held at home, around kitchen tables, in basements or garages, and even out of doors.

What’s worth noting is Connor launched SchoolHouse in January 2020, just weeks before the global pandemic shut down in-person learning at America’s public schools. Classes moved online to Zoom and parents became de facto teachers. Over the year, the situation in public schools has become even more fragmented with schools moving from remote learning to a hybrid of in-person and online and sometimes back to remote learning based on fluctuating COVID numbers and in some cases, teachers refusing to return to classrooms.

Connor says COVID definitely gave SchoolHouse unanticipated momentum as parents sought alternatives for educating their children. During the first six months of 2020, he talked to hundreds of teachers and parents about learning pods.

“What we offered teachers was the ability to get back to why they went into teaching to begin with which in most cases is to make a difference for kids. With SchoolHouse, they have more autonomy with the curriculum, their class size is small, they collaborate directly with parents, and they are paid typically 10 to 20 percent more. Teachers are also treated as the professionals they are,” Connor explains. “Our message really resonated with teachers.”

“Private school tuition at top schools in New York runs $24,000 a year or more for elementary students. SchoolHouse’s tuition is about $14,000, which is reasonable for parents and more than enough to allow us to be competitive on teacher compensation. The big savings comes from not having the costly infrastructure in school buildings and administration,” he adds.

Tuition costs vary based on geographic location of the pods. Texas, for example, has a lower cost of living so tuition is lower.

Connor also talked with parents to gauge their interest. He found an enthusiastic potential customer base. “COVID put a lot of pressure on parents to teach their kids while trying to adjust to changes in their own careers. They needed an alternative that provided structure and would ensure their kids were learning. The SchoolHouse concept appealed to them,” he says.

The other message that resonated with teachers and parents was the value delivered to kids. “In-person peer learning is really important for a child’s academic, social and emotional development. Zoom class doesn’t do that for kids. SchoolHouse provides the structure for a group of children to meet every day, in a safe environment, with a great teacher who is enjoying their work and parents who have a direct line of communication with their teacher. This approach works for kids,” Connor says.

The role of SchoolHouse is to connect groups of parents with teachers and provide infrastructure for a safe and effective learning environment, Parents can go to the SchoolHouse website, enter their zip code and find other families interested in starting a pod in their area. SchoolHouse works with churches, neighborhoods, and employers to establish pods.

SchoolHouse also provides administrative functions that include operating in compliance with state and local laws and regulations, a task that has been particularly challenging during the COVID-19 pandemic. “Things change every day so the need to read and interpret changing regulations has been constant. Being an attorney has been very helpful in that regard,” Connor says.

SchoolHouse launched in 2020 with locations in New York State, but very quickly expanded. Eight months later, SchoolHouse is in eight states, largely on the East Coast, and is targeting other states for expansion. Connor attributes the rapid growth primarily to word-of-mouth fueled by high-profile media attention from The New York Times, The Wall Street Journal, CNBC, and local media outlets. “Parents are happy with our model and very happy with the academic results. SchoolHouse kids are testing one to two years above their grade level in reading and math,” he says.

Looking ahead to fall 2021, Connor expects the majority of SchoolHouse’s current teachers will return even as traditional schools open back up to in-person learning. “Many teachers leave the profession each year because it’s such a difficult profession. We’re giving teachers a great new career option that allows them to find their joy and passion again.”

He would like to attract more low-income families to SchoolHouse and is researching states with public financing options. “My work on the Espinoza matter has really been helpful as we look into utilizing private school choice options,” he says.

Connor says the biggest win in SchoolHouse’s short history is having the opportunity to provide a great academic experience for hundreds of children. It is a dream come true for this teacher turned lawyer turned entrepreneur.

In terms of starting a company, Connor says there is no substitute for talking with your target demographic. “You have to consistently talk to customers and understand their problems. This is true whether you’re five months or even five years into your company. At the end of the day, no one is going to buy a product if it doesn’t solve their problem.”