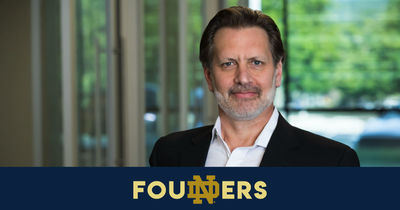 Dave Vreeland is not a proponent of big, lofty life goals. Leave changing the world to someone else. Instead, he’s built a career—and founded three successful companies in the process—by talking to as many people as he can, paying attention, reading whatever he can get his hands on, and working his tail off.

“I highly recommend being micro ambitious,” he says. “Look for smaller, immediate opportunities. There’s not as much competition but the returns are there.”

While a student at the University of Notre Dame, Vreeland competed on the men’s swim team and served as the director of the Keenan Review, an annual talent show and one of Notre Dame’s most beloved events, attracting an audience of over 4,500 each year. He also studied hard to ensure a place in a medical school once he graduated. Vreeland credits his Notre Dame experience with helping him develop skills essential to an entrepreneur.

“The liberal arts education made me a more rigorous and focused reader, which taught me to think more broadly.

When I left Notre Dame, I had a deep appreciation for relationships and how they benefit your career,” he says.

Vreeland’s drive to be successful is rooted in his childhood in West Palm Beach. His family was lower middle class, not wealthy as one would imagine with that hometown. He wanted to be successful and help his family, which made a career in medicine attractive. But after being accepted into the University of Miami’s School of Medicine, he hesitated.

“I asked for a year to make up my mind and the university said they’d hold my spot,” he recalls. “I worked at a blood bank, I bartended, and ultimately decided I didn’t want to be a physician. Instead, I earned a Master’s in Healthcare Administration at Washington University in St. Louis and launched a career in healthcare management.”

During graduate school, Vreeland worked nights and weekends at Barnes Hospital in St. Louis, one of the oldest and most esteemed academic medical centers in the country. He and his wife then moved to Chicago where he did an administrative fellowship at Northwestern Memorial Hospital. It was there he identified the first of many issues ripe for a solution.

“One of my responsibilities was to process expirations—deceased patients. That involved moving the patient’s medical records to the basement, and one would often need a cart to handle the stacks and stacks of paper files comprising one person’s record. This was in the early 1990s before digital recordkeeping. It was crazy. The need for automation was really a tipping point in health care. I left hospital administration in 1996 for EY to consult with hospitals on healthcare IT,” Vreeland says.

After eight years consulting on behalf of EY and deepening his knowledge of healthcare IT, Vreeland was eager to start his own company and co-founded Cumberland Consulting Group in Nashville, Tennessee in 2003. He was responsible for business development, corporate affiliations and partnerships, and general management and oversight of the firm’s provider practice. He admits it was an uphill climb after working with a global consulting brand like EY with longevity and instant name recognition.

“It was very easy to start Cumberland but required a tremendous amount of work. Talking clients into hiring us was tough because we didn’t have a big name. The first four to five years were hard. Then, in 2009, the HITECH Act passed. Our timing as a healthcare IT consulting firm was beautiful,” Vreeland says.

The HITECH Act, short for Health Information Technology for Economic and Clinical Health, was signed into law in February 2009 by President Barack Obama as part of the American Recovery and Reinvestment Act. The primary purpose was to encourage, with financial incentives, healthcare providers to adopt Electronic Healthcare Records and supporting technology. This would prove to be one of those “micro ambitious” moments Vreeland richly enjoys.

“At the time, there were hundreds of electronic medical records systems on the market and none of them was integrated, a huge problem because data sharing was impossible. What HITECH did, as an unintended consequence, was force the consolidation and integration of healthcare IT systems. Because of a relationship I had with the one vendor that did everything, Epic out of Madison, Wisconsin, we took advantage of several niche opportunities, including converting Federally Qualified Health Centers to electronic medical records systems. Our business exploded, tripling in size three years in a row. In 2011, we sold half of the business to a  private equity firm,” he says.

Vreeland remained with Cumberland for five more years, overseeing several acquisitions and growing the practice. Moving on in 2016 was an easy decision. “I was pushing 50 and on the road 45 weeks out of the year. I wanted to spend more time with my son.”

And he did, driving him back and forth from school and attending his activities. For several years, Vreeland had been a member of the Irish Angels, an angel investing group composed of Notre Dame alumni. Enjoying the experience of investing in and mentoring portfolio companies, he decided to start his own investing group, Jumpstart Capital, as a hobby in 2017. He promptly raised a $21 million fund purposefully focused on early-stage digital health startups.

In 2019, a colleague from his EY days, Scott Kolesar, joined him at Jumpstart. Kolesar had recently retired from his role as America’s Health Technology Innovation and Digital Leader at EY, where he was responsible for the design and execution of growth strategies and health IT solution innovation. Kolesar was a perfect complement to Vreeland’s rigorous approach to investing, molding and scaling startups.

The approach paid off. An investment in SightBox, a membership model for contact lens wearers, exited to Johnson & Johnson with a 6.5x return to investors in just three-and-a-half months! In 2020, Jumpstart had two more successful exits: CaseTabs, a cloud-based surgery coordination app for ambulatory surgical centers, and Optimize Health, a remote patient monitoring platform for outpatient medical practices.

Although 2020 and the global pandemic were absolutely brutal to America’s hospitals, Vreeland was paying close attention to the microcurrents. And what it told him was the golden age of digital health had finally arrived.

“There is a quote I love by Vladimir Lenin. ‘Nothing can happen for decades; then decades can happen in weeks.’ That describes what I saw happen to digital health in 2020,” he says.

Vreeland stopped making investments through Jumpstart and he and Kolesar co-founded Caduceus Capital Partners in October 2020 with the goal of raising a $100 million fund. An integral part of Caduceus is a Health System Innovation Council that includes health system leaders with a vested interest in digital health and who are lending their insights and investment dollars to the effort. The Florida Community Health Network, an investment company that supports programs and initiatives for Memorial Healthcare System in Hollywood, Florida, is the anchor member of the Council. Caduceus Capital Partners is actively seeking additional health systems from around the country to join this strategic alliance.

Vreeland admits the COVID-19 pandemic drove this new venture as it uncovered vulnerabilities in America’s healthcare system and industry at large. Observing the opportunities and driving change with early-stage companies with a strong product-market fit has been his “sweet spot” and now with Caduceus Capital Partners and its collaborative Council, Vreeland believes he and Kolesar can fast-track testing, scaling, and adoption efforts while creating positive change for health systems and patients in this new, post-pandemic world.

Reflecting on his career as a company founder, Vreeland says being an entrepreneur has allowed him to flex what he’s good at, including identifying not so obvious opportunities. He’s quick to admit one thing: “Anyone who says luck doesn’t play a role in a startup’s success doesn’t know what they’re talking about.”

His advice to future entrepreneurs is to read a lot, be open-minded and have a backup plan. “Look at President Harry Truman. He was a small-town politician from Missouri who failed as a businessman. Ten years later he was president. If your startup doesn’t work, have a back-up plan.”