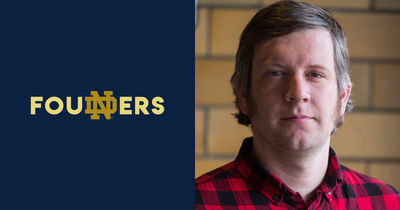 Richard Worsham is the first to admit he is not a “gear head.” He is, however, the co-founder and lead designer of the hottest hand-built, made-to-order motorcycles in America, Janus Motorcycles. Who says so? Jay Leno says so as do a growing legion of owners of the classically styled bikes that go against the grain of traditional brands like Harley-Davidson and Honda to bring joy back to hitting the road.

Did we mention that Janus Motorcycles is headquartered in Goshen, Indiana, and nearly all parts are crafted with pride by Amish metalworking and coating shops located within a 20-mile radius of the bike shop? How does this happen in today’s mass-produced, cookie-cutter world?

It was, in many ways, a fluke born of Worsham’s love of classical design, of enjoying the journey, and in the end, building something that brings people together and into the realm of what can be.

The Janus story begins in Virginia where as a boy, Worsham loved cars, spending hours on end drawing them. He dreamed of starting a car company, even going so far as branding it “Goddini,” a take on his middle name, Goddin, with an “i” to make it sound more exotic.

“I was fascinated with design,” Worsham admits “and I credit my parents who were both architect-historians. Also, my mother had a series of Volkswagen Bugs—I think five—and a vintage Vespa, which were totally iconic and impractical in a way we consider vehicles today. It’s probably the reason I like funky, beautiful design and appreciate having fun getting where you’re going.”

Further underscoring his lack of gear headedness, Worsham earned an undergraduate degree in literature before heading to the University of Notre Dame to pursue a Master of Architecture. Two things attracted him to Notre Dame. First, the program’s stated mission to “promote built environments that are durable, useful and beautiful, and which are supportive of strong communities.”

The second reason was more personal. The program’s former chairman, Carroll “Bill” Westfall, had taught Worsham’s father while teaching at the University of Virginia. The opportunity to learn from his father’s former mentor was very meaningful. Says Worsham, “Bill’s emphasis is on the usefulness of history to practicing architects. I really related to his approach.”

As a graduate student, Worsham’s Notre Dame experience wasn’t that of a typical “Domer.” He traded football game festivities and residence hall socializing for long days of studying. He explains his experience this way: “Notre Dame’s architecture program is very rigorous. We rarely left Bond Hall. I was in class from 8 a.m. on and frequently worked in the studio until 2 a.m. When I did have downtime, you could always find me in the coffee shop with drafting tape on my elbows.”

The world works in mysterious ways and in Worsham’s case, seemed to plot a path to his future company. During his summers off from school, he worked in a vintage motorcycle repair shop, learning his way around bikes. He also did an internship with Gallaratti Architetti, an architecture firm in Genoa, Italy. To get around the ancient port city, someone lent him an old Vespa motor scooter. He loved it—the internship and the Vespa.

The tipping point, however, was when Worsham graduated from Notre Dame and couldn’t find a job. “In 2011, there was an economic downturn and only two of the ten architecture graduates got jobs right out of school. Out of necessity, I decided to start a company,” he says.

The company was Janus Motorcycles, which he co-founded with Devin Biek, owner of Motion Left Mopeds, for whom Worsham worked for in the past. The two shared a passion for small, lightweight bikes and a vision to create and manufacture custom motorcycles in Goshen. With seed money from Magnet Investors (now Investor Connect), the two got to work on a prototype.

“We went through the seed money pretty quickly, but by spring 2012, we completed the first generation of the Halcyon motorcycles, a small, 50cc bike that retailed for $5,000. Half of the people who saw it said, ‘What in the world are they thinking?’ and the other half said, ‘That’s gorgeous!’ From our perspective, it was exactly what we set out to create, a classically designed motorcycle that was beautiful to look at, easy to handle and fun to ride,” Worsham explains.

Unfortunately, they didn’t sell enough motorcycles to pay either co-founder a salary. With a family to support, Worsham moved back to Virginia to work with an architecture firm. Eighteen months later, his partner issued an ultimatum: if we’re going to do this thing, you have to come back.

This was not a decision Worsham could make alone. “I had to sell my wife Amy on it. She enjoyed living in Richmond and all of the cultural things we had there. But she agreed to return to Goshen and give it a shot. I quit my job and we moved back,” he recalls. “Within a few months, I drew my first paycheck from Janus.”

Spring 2015 turned out to be the turning point. Grant Longenbaugh and Jordan Swartzendruber joined the Janus team, bringing with them operational and marketing expertise that ultimately transformed the company. Says Worsham, “The fun idea finally became a real company.”

The first spark was a Kickstarter campaign that brought in more than money. Janus’ romantic, retro-looking motorcycles caught the attention of big media. In fairly quick succession, The Wall Street Journal, New York Times, Robb Report, and  Motorcycle Classics ran stories on the company. The exposure led to more sales, which created new jobs at Janus and a growing line of motorcycle accessories and branded merchandise that created a new revenue stream.

The media exposure also brought investors. After bootstrapping Janus for years, local investors stepped up, including a farmer and a serial entrepreneur from the trailer industry. These investors not only provided capital to help scale the company, they also provided their considerable business expertise. Says Worsham, “They recognized the benefits to our community. They are the best kind of investors.”

Last year proved to be the most transformative year of all. Janus had set an ambitious goal of selling 250 bikes and then the COVID-19 pandemic hit. “Going into 2020, our lead time for a custom motorcycle was six weeks. With the pandemic shutdowns and disruptions to our supply chains, lead times stretched to 15 weeks. To get back on track, we adopted lean manufacturing principles and began to rethink our supply chain to be even more hyper local. We ultimately went from building four motorcycles a week to seven,” Worsham says.

Another media hit in spring 2020, an appearance on a popular YouTube channel, Jay Leno’s Garage, was huge. During the 30-minute segment, Leno interviewed Worsham and Biek, test rode a Janus bike complete with running commentary throughout, and in the end, gave Janus’ motorcycles two thumbs ups and exposure to some 225,000 gear heads.

The timing could not have been better. The company began hosting twice monthly “Discovery Days” open houses, inviting enthusiasts to visit their shop and test ride the motorcycles.  “People wanted to get outside and what better way to do it than on one of our bikes, which are easier to handle than traditional road bikes. We had visitors from California, Seattle, Florida, literally from all over. We got to know our customers and they got to know us. That’s about as authentic as it gets,” Worsham says.

By the end of 2020, Janus Motorcycles hit their sales goal and had a good understanding of typical buyers and potential targets. Core customers include older folks aging out of their big, challenging to handle Harley Davidsons. New riders, particularly women, were attracted to Janus bikes, their styling and ride.

“These are motorcycles for people who don’t want to be bikers and want the experience of an old, beautiful, hand-crafted motorcycle without the heartache of constant repairs,” Worsham says. “You can be practical, but that’s not what Janus is all about. It’s about a really fun bike, a really visceral ride, a real time machine.”

In early March, Janus launched their newest model, the Halycon 450, the third iteration of their flagship bike. It has some noticeable differences such as a larger 450cc engine, a “soft tail” design for a more comfortable ride and upgraded fittings and finishes. They are taking pre-orders in advance of the June 2021 physical release. To grease the wheels, customers can go to the Janus website and build their dream bike online using the company’s new configuration tool.

Looking back over the last decade, Worsham says the biggest challenge early on was money. Today the challenges are scalability, supply chain security and inventory systems. He is grateful for the Goshen community with its deep roots in manufacturing, skilled Amish craftspeople and generous nature., which has fueled Janus’ success.

Perhaps harkening back to what he learned as an architecture student at Notre Dame, in a program that taught the importance of building strong communities, Worsham says one of the most rewarding things about founding Janus is seeing the team they’ve built. “We now have 20 employees. We give people a lot of responsibility and they have fun. Ryan Roberts has built over 500 bikes. Kelly Borden does all the pinstriping. It’s great to bring people together as a family.”

When asked if he had advice for future entrepreneurs, Worsham laughs and says, “I used to offer advice but it wasn’t very helpful.”

He then reversed course and offered this: “Surround yourself with good people who can tell you when you’re wrong and when you’re doing something right.”