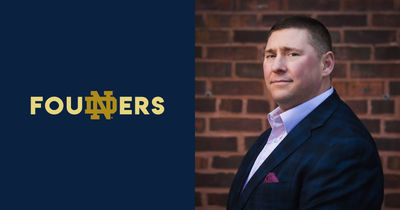 As an undergraduate at Purdue University in the mid-1990s, Jeff Lampe developed a fascination with the venture capital industry—not that there were many venture firms in Indiana. At the time, the industry was largely centered on the East and West Coasts, particularly those with a tech-oriented thesis. That didn’t stop Lampe.  He read all he could on venture firms, and started writing letters and doing phone interviews with anyone who would take his call.

His passion paid off.  Immediately after graduation, he joined Monument Capital Partners, a merchant bank in Indianapolis. That opportunity allowed him to do something 24-year-olds rarely can: co-found an Indianapolis-based venture capital firm, Gazelle TechVentures. The goal was to invest in promising tech startups to prevent them from fleeing Indiana for the coasts. It was a gutsy move for a guy barely out of college.

Lampe smiles at the memory and says his mother deserves the credit. “My mom always said to dream big and surround yourself with like-minded, smart people of the highest integrity and great things will happen.”

And they did. Among the other co-founders of the firm were serial entrepreneurs Scott Jones, who also served as Gazelle’s chairman of the board, and Don Aquilano, recruited to serve as managing director; and many others who played a huge part in the firm’s success. Together, the team succeeded in attracting Indiana universities, local companies and high net worth individuals to the firm, ultimately raising a $65 million first-time fund and becoming, almost overnight, one of Indianapolis’s largest tech-focused venture capital firms.

Gazelle ultimately ended up ranking in the top quartile for venture funds nationally for its 2000 vintage and despite the significant challenges posed by the stock market crash in 2000 and the events of 9/11 in 2001, the firm continued to invest. With their first fund, they invested in Rubicon Technologies, AuthorHouse and Tapestry, just to name a few. Portfolio companies based in Bloomington, Chicago, and Indianapolis successfully completed initial public offerings and/or were acquired.

Meanwhile, Lampe was also busy investing in himself. “The alumni I met from the University of Notre Dame were so well-rounded and that intrigued me. I was attracted to the Mendoza College of Business’ Master of Business Administration (MBA) Program with its emphasis on the greater good and leadership. I wanted to add this perspective to my toolkit so I became a fulltime MBA student at Notre Dame while working fulltime at Gazelle.”

After graduating from Notre Dame, Lampe made a surprise career move: he left the venture capital firm he’d help co-found and moved to Chicago with his wife where he’d accepted the role of partner at Woodland Venture Management.

“It was hard to leave,” he says. “I had acquired a great deal of experience managing due diligence and deal structuring as well as working closely with our fund and portfolio company senior management, but it was time.” In 2009, Gazelle was renamed Allos Ventures, and continues to invest in Midwest-based tech startups from its offices in Indianapolis and Cincinnati.

Lampe spent the next 10 years with Woodland Venture Management and then four years with two other ventures before being recruited to Signature Bank in 2019. He and a number of colleagues were charged with establishing Signature Bank’s Venture Banking Group. Today, Lampe is a managing director of technology banking within Signature’s Venture Banking Division, responsible for covering 13 states in the Midwest region. It’s a role in his technology sweet spot, where he works with venture-backed portfolio companies.

Lampe is no stranger to adversity and in early 2020, the venture capital and banking industries were hit with a black swan event: the COVID-19 pandemic. He calls the uncertainty that touched personal and professional lives at the deepest levels “extraordinary” and credits his father, a retired Airman First Class with the United States Air Force and an accomplished airline executive, for giving him the strength to navigate through the pandemic’s stress and unforeseen disruptions.

“My father traveled all over the world with the Air Force and the airlines he worked for, and he shared something very profound with me: ‘Rarely does any military plan survive contact with the enemy.’ He went on to say that some do make it through, and those are the ones with leaders who can manage through the turbulence of an epic flight. Get each task done the right way and move on from there,” Lampe fondly recalls.

“This provided valuable context to what we were facing at Signature Bank,” he adds.

From the very beginning of the pandemic, the rules changed. Lampe, who attended Notre Dame specifically to build up his leadership skills, finds himself drawing on them every day. But he credits Signature Bank’s senior leadership—Scott Shay, co-founder and chairman of the board; Joseph De Paolo, co-founder, president and CEO ; and John Tamberlane, co-founder and vice chairman as well as many others—for defining the Bank’s action plan early on and leading the charge.

“We focused on our stakeholders and were in constant communication with one another. In our group, we worked on plans for our clients, which, in many cases, included Paycheck Protection Program (PPP) loans. Many colleagues in the Bank worked around the clock to ensure every client who wanted and qualified for a PPP loan was able to get one. In the end, we funded $1.9 billion in PPP loans. We didn’t succumb to the chaos, and as a result, the Signature Bank team did a superb job,” he says.

Nearly a year later, Lampe says the Bank, its investor groups, and portfolio companies are still dealing with COVID-19’s aftermath. They are now working through a second round of PPP loans. There is a sense of relief and pride in Lampe’s voice as he describes the experience.

“It’s pretty wonderful to be part of an organization that immediately mobilized to help small businesses,” he says. “What’s been most satisfying is the entrepreneurial empathy and understanding of our team on this journey.”

Perhaps it’s why, despite the life-altering challenges COVID-19 has wrought, that Lampe remains fascinated by the venture capital industry. “I enjoy playing a very small part in helping companies achieve their goals, whether it’s providing financing, wisdom, counsel, or an introduction. Relationships built on trust; that’s what makes businesses endure and thrive.”

Thinking back to the early days of his career at Gazelle, he seems a bit in awe of his own achievement, saying simply, “I was just a kid.” Then, Lampe offers a bit of advice to other “kids” fascinated with startups and venture capital firms: “Don’t lose sight of the fact that people build tech. Always celebrate the small wins, yours or the customer’s, and you’ll have great success.”