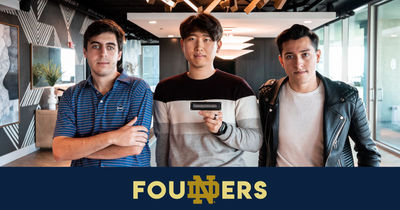 In South Korea, all able-bodied males between the ages of 18 and 28 must serve in the military for two years. At the end of
Brian Youngil Cho’s freshman year at the University of Notre Dame, he learned it was time to fulfill his commitment to his homeland.

When he returned to South Bend in 2016 for his sophomore year, Cho’s friends were all seniors. He felt compelled to do something big and saw the annual McCloskey New Venture Competition as his outlet. The competition is the signature event in Notre Dame’s innovation ecosystem. It gives students, faculty, staff, and alumni a real-world opportunity to test the validity of ideas, develop valuable skills and compete for $200,000 in prizes.

Although students can enter McCloskey as individuals, Cho saw the value of having a team and set about recruiting others to join him. “I met a freshman, Peter Moeckel, at the Subway on campus. We talked about entering a wind energy company. Looking back, it wasn’t the best idea in the world, but we went with it,” Cho says.

Although the duo didn’t win, they committed to entering the following year with a new idea. While home in Korea for the summer, Cho spoke with his father, formerly head of research and development at LG and now a serial entrepreneur, about entering an idea for flat core audio speakers the two had worked on together for several years in the McCloskey Competition. His father, Leeg Hyun Cho, agreed.

On his return to South Bend, Cho and Moeckel started working on their new company, dubbed Flato, for the 2018 competition. When a Kickstarter campaign fell flat, the two finance majors agreed they could use some marketing expertise on their team. “I went to a meeting of the Notre Dame Marketing Club and made my pitch. Afterwards, Erikc Perez-Perez, the club’s vice president, reached out about joining us. In addition to his marketing expertise, Erikc is a great designer and photographer. He became our third co-founder,” Cho says.

One of the first things Perez did was rebrand the company, suggesting a new name that would resonate better with consumers. At the time, the company's model was business-to-consumer. Cho and Moeckel agreed with Perez’s recommendation. And thus Resonado was born.

The basis of Resonado was the Chos' technology, now the patented Flat Core Speaker™ technology, a novel type of electrodynamic speaker transducer designed with a dual parallel bar magnet and planar voice coil array mounted perpendicularly to a flat “racetrack” diaphragm. The speaker is an alternative to traditional cone-shaped speakers and is able to retain a thin profile at virtually any size without compromising sound quality.
The trio entered the 2018 McCloskey Competition with Resonado and the idea of selling speakers with the flat core technology direct to consumers. When they came up short in sixth place, they retooled their entry with a business-to-business model and entered again in 2019. This time Cho, Moeckel, and Perez walked away as the competition’s Grand Prize Winners and $25,000—they tied for first place with Vital View Technologies—and onto a fast-track to disrupt the audio industry.
Looking back, Cho says it was a mutual interest in building a unicorn, a term used in the venture capital industry to describe a privately held startup company with a value of over $1 billion, that has bound the three tightly together through the ups and downs of a startup.

“I didn’t know Peter or Erikc when we started working together. But we had a passion for Resonado and what we were building. As we’ve worked together over the last four years, we’ve become friends. As business partners with specific roles and now friends, we have no filters; we can say anything. There are no egos, no emotional conflicts. We’re all committed to this.”

And Notre Dame was committed to Resonado, now known as Resonado Labs, and its student founders. The coaching staff of the Fighting Irish football team wore headsets emblazoned with the Resonado logo during the 2019 season, a huge boost to the startup’s brand. Notre Dame alumni also provided introductions to potential investors and customers, including those in the recreational vehicle industry in nearby Elkhart, Indiana. Each introduction provided something of value, says Cho, be it advice or key industry connections.

“We discovered that Notre Dame alumni will always take a call from a student or fellow alumni. The value of being part of the Notre Dame family was huge for us,” he says.

After spending time in the Silicon Valley area, the Resonado Labs team eventually returned to the Midwest, landing in Chicago because of its proximity to Notre Dame but also because of an incredible resource called mHUB, a co-working space dedicated to helping hard-tech entrepreneurs and manufacturers commercialize new products. mHUB had a wealth of resources not available in California, including a fabrication center with CNC machines, milling machines, 3D printers, materials, workstations, and mentors experienced in manufacturing.

Says Cho, “We needed access to a facility like this to prototype products so potential customers could experience the actual technology rather than a digital idea. It was the right decision; moving to Chicago and mHUB have resulted in customers.”

Despite the need to build prototypes, Resonado Labs at its core is a technology company that licenses its ideas. The reason is it’s a much faster path to commercialization, adoption and profitability. This model has required robust protection of the company’s intellectual property. Thus far, Resonado Labs has three U.S. patents with several more expected in 2021. A number of global patents are also in process.

The approach also enables Resonado Labs to work with a customer’s current suppliers, a timesaver for the customer.
“By working directly with a customer’s current supply chain and established suppliers, the customer does not have to qualify new vendors, which can be a lengthy process. When a customer licenses our Flat Core Speaker or other technology, we provide the manufacturing specifications to their manufacturer,” Cho says.

Resonado Labs’ technology has struck a chord with the recreational vehicle (RVs) industry, one of its primary targets. The RV industry is experiencing a renaissance, one accelerated by the global pandemic. With limited vacation options, more people have been purchasing RVs and hitting the road. These aren’t the campers of old. Today’s RVs are much more glamorous and likely to include all of the tech consumers enjoy in their homes.

“RVs are all about the clever use of space, lighter weight, and now creating more sophisticated experiences for consumers. Our Flat Core Speaker technology is perfect for RVs; they can be installed in places traditional speakers can’t, which allows for exciting new audio experiences,” Cho says.

Those same benefits apply to the automotive industry. With the new emphasis on electric and soon autonomous cars and trucks, the big automotive designers are rethinking interior design. Instead of focusing on the driving experience, there is now more emphasis on vehicles as entertainment hubs and optimizing the passenger experience.

This, Cho says, gives Resonado Labs an opportunity to disrupt an entire industry. “Our speakers can literally be placed anywhere inside a vehicle to create individual sound zones. This is a big change from today’s status quo of placing speakers under a seat or in a door.”

The winds of change are certainly in Resonado Labs’ favor. As in the vehicle industries, the bulky designs of traditional home audio systems are no longer in vogue. Consumers want sleeker, less intrusive designs. The company’s Flat Core Speaker technology gives brands the design flexibility to create new products in-line with consumer desires.

Business development and engineering take money and finding funding is among Cho’s many responsibilities. Resonado Labs has been fortunate to secure funding at the right times. The Notre Dame IDEA Center, Elevate Ventures, 500 Startups, and Band of Angels were among the company’s early investors. In 2020, Resonado Labs did a bridge round with hopes of raising $500,000; the round over-subscribed just shy of $1 million from investors that included VisionTech Angels, Queen City Angels, Connetic Ventures, Lofty Ventures, and individual investors.

Resonado Labs is currently in what Cho calls an “expansion round” that seeks to raise $2 million that will go to scaling the company’s team and capacity. The company is also pursuing non-dilutive funding. In early 2020, Resonado Labs was selected for a Small Business Innovation Research (SBIR) Phase II Award worth $750,000 from the U.S. Department of Defense. The project, however, was not funded, as the pandemic struck and the federal government shifted resources to COVID-19-related research. Cho is optimistic Resonado Labs can reignite their SBIR project this year.

“Our biggest challenge right now is keeping up with demand, which is a good problem to have,” Cho says. “We have several major projects in progress and more in the pipeline. Everyone on the Resonado Labs team, all eight of us including my father who is our chief technology officer, is doing the work of two people. To keep things moving and to avoid burn-out, we need more people who are as passionate as we are on our team.

Going into 2021, Cho and fellow co-founders Moeckel and Perez have plenty to celebrate. Late last year, Catharina Lavers Mallet, a former senior executive with Bose, joined their board of advisors and will help with honing their strategic direction and maturing their operations as they grow. They also secured a licensing deal with global audio manufacturer Soundlab Technologies. Early in February, Resonado Labs announced its Flat Core Speaker technology will soon make its debut in the recreational vehicle industry with one of the most iconic brands, Airstream, in its 2022 Touring Coach line.

Indeed, Resonado Labs is fast becoming ubiquitous. In January, the company was featured on the covers of two leading industry publications, AudioXpress and Voice Coil. This month, DigitalTrends profiled the company.

Cho says these wins are a testament that the Resonado Labs team is doing something right. “The audio industry is super competitive. Our team has accomplished much in very little time. Now, no matter who we talk to, they know about us. The early adopters and fast followers have their eyes on us.”

He adds, “We are no longer a nobody; we are a somebody.”

Eager to spread the “wealth,” Cho now advises student entrepreneurs at Notre Dame and serve as a judge for the McCloskey Competition. His advice to those who want to follow in his, Moeckel’s and Perez’s footsteps is this: “Four years ago we knew nothing, but there was always a Notre Dame alumnus willing to help us. Don’t be afraid to reach out to alumni. Don’t be afraid to ask stupid questions. Mentors are there for you.”