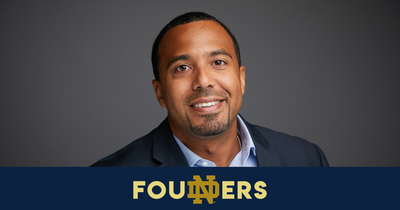 As an All-American high school football player in Winter Park, Florida, the world was Joe Ferrer’s oyster. The University of Florida and University of Miami were recruiting him hard. Then came the day when University of Notre Dame Coach Lou Holtz knocked on his family’s door.

“There was a lot of fanfare around his visit, but what I remember most from that day is Coach Holtz emphasizing that coming to Notre Dame was not a four-year decision, but rather a 40-year decision. To a kid caught up in right now, that comment made me stop and think. What he said has proven to be really accurate.”

After Holtz’s visit, Ferrer made a trip to South Bend, Indiana, to experience Notre Dame for himself. He was not disappointed. “I’m a sucker for great traditions so the stories of the Four Horsemen, the Gipper, and Knute Rockne pulled me in. But it was campus, the academics, and of course the NBC contract with Notre Dame which put us on television every weekend so my family could see me play, that sealed the deal for me,” he says.

What Ferrer didn’t know then was the lifelong impact playing football at the highest levels for Coach Holtz and later Bob Davies would have on his life. He recalls running stadium stairs at 5 a.m. in the morning in five-degree weather—tough stuff for a guy who grew up sweating through many a steamy, 95-degree practices in central Florida.

“It was a struggle,” the former defensive linebacker admits. “There was so much to know, so many ups and downs. I learned the importance of fighting until the end to achieve your goals. That’s when you see the results of hard work.”

After graduation, Ferrer, who has the rare distinction of sacking both Tom Brady and Drew Brees while at Notre Dame, played several stints in the Canadian Football League. He then left to become a financial advisor, a field that can take years to build a clientele and income. Undaunted, Ferrer came up with a strategy to accelerate his career. “I told myself if I put as much into this as I did into football, I could make things happen.” Nineteen years with Mutual of Omaha later, Ferrer is recognized among the top five percent of financial advisors worldwide.

In 2019, Ferrer published a best-selling business book, Mailbox Money, about a fictional salesman and his mentor who leads him through the four disciplines of success: stay close to the process, visualization, transformation, and applied information. He followed up in 2020 with a second book, Journey to the 5th, in which his character discovers what comes after one achieves financial success.

Not wanting to spoil a good story—or miss an opportunity to sell two books to those reading this profile—Ferrer admits the books are autobiographical. He is, in fact, living Journey to the 5th at this very moment. You see, last October, Ferrer founded a nonprofit called Mailbox Money Community Foundation with the express purpose of engaging people of all income levels in creating a happier, more generous, kind and united society through the practice of micro-philanthropy.

His moment of enlightenment came on his fortieth birthday. Instead of the typical celebration involving cake, family and toasts, Ferrer chose to mark the milestone with forty acts of random kindness, all performed in one day, all streamed on social media. The excitement of the day three years ago lives on in his voice.

The response from others was eye-opening as well. Friends and colleagues who had seen the videos asked when he was going to do it again. “That led me to think that we could build a platform to enable more people from all walks of life to participate in spontaneously spreading kindness.”

At the core of Mailbox Money’s platform is the idea people don’t have to be rich to give. Small gifts multiplied over hundreds, thousands, and even millions of donors can have  a big impact. What Ferrer has done to make is easy to give—and keep giving—is create a subscription model for micro-philanthropy. People have the option of a one-year subscription of $10 per month, payable on a monthly or annual basis. There’s also a straight donation option.

“Our goal is to become the Netflix of philanthropy,” Ferrer says. How easy is that? You subscribe to get services like Netflix and think nothing of spending $15-$20 a month. Now you can subscribe to give.”

Of every dollar donated, Mailbox Money spends 80 cents on intentional acts of kindness in areas requested by donors. For example, donors can suggest their donations go to the homeless, elderly or even animals. The board of directors makes the final decision based on donor recommendations. As the platform scales and its donor base grows, Ferrer says the amount per dollar given to fund random acts will increase. Currently, he is bootstrapping everything, including the website, social media, and contract employees working to create a movement. Social media platforms Facebook and Instagram are being used to share Mailbox Money’s intentional acts of kindness and how to get involved.

And here Ferrer reveals marketing brilliance. Every gift is delivered in a gold envelope so that people will recognize Mailbox Money and its good works and get involved. If the frenzy over Publishers Clearinghouse’s letters and the fictional Willy Wonka’s gold tickets mean anything, Ferrer should have no problem achieving notoriety once people put two-and-two together. “The gold envelopes are our secret sauce, a tangible reminder of the gift and the joy that comes from receiving one.”

Within three months of launching Mailbox Money, Ferrer and his team put the gold envelopes to the test, handing out $3,000 in random gifts during the 2020 Christmas season. “We videotaped and shared every Mailbox Money gold envelope event and encouraged others to take and share photos and videos to help make giving contagious.”

Like any startup CEO, Ferrer has seen his share of challenges. Despite the positive response from those who hear the Mailbox Money value proposition, it has been difficult convincing people to commit to giving $10 a month for a year. “It’s a hard sell, much harder than I imagined it would be,” he admits.

“We intentionally set the monthly commitment at an amount most people can swing. Ten dollars is a pizza; it’s doable for most people. But people pay for what they want—that Costco membership, Amazon Prime, Netflix so they can binge Bridgerton or other popular series. Subscription giving is a new idea and converting people takes time,” he says.

The message is getting through to a growing community of believers. Mailbox Money has 4,200 followers on Facebook, the foundation is now live in 16 states with boots on the ground engagers who hand out gold envelopes, and more than 200 people have subscribed to give monthly.

Ferrer is working hard to reach a critical mass of awareness so that Mailbox Money begins pulling in tens of thousands of people who used to think they had to be rich to be a philanthropist and help others. “Think of the impact we can have through thousands of small, intentional acts of kindness; we could change the core of society. Why, that would be Nobel Prize worthy,” he says, visualizing the foundation’s desire of distributing one million gold envelopes.

If anyone understands how difficult it is to reach one’s goal, it’s Ferrer. He will never forget running stairs at Notre Dame’s stadium in the pre-dawn cold. To those considering social or commercial entrepreneurship, he urges them to “get your mind right because it’s a fight.”

“If you think you can throw an idea out and people will flock to it, forget that,” Ferrer says. “Starting something, whatever that something is, it takes money, commitment, passion, faith, and resilience to succeed. Pack your hardhat; you’re going to need it!”