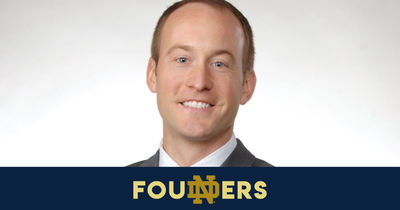 Every day in America, 25,000 people sprain an ankle playing sports, on the job or simply when walking around. And more than one million of these folks visit emergency rooms each year because of ankle sprains and fractures. For the most severe injuries, physicians turn to an old standby to facilitate healing, the boot.

You’ve probably seen or even worn one. Ankle boots are clunky, heavy, uncomfortable devices meant to immobilize the ankle. The boot has been the standard “go to” for physicians  for 30 years, mainly because other than a cast, there is no other option.

Just as a reminder, Gavin Ferlic, co-founder and CEO of TayCo Brace, a South Bend, Indiana, company that makes a high-tech, lightweight alternative to the traditional boot, will occasionally try one on to better evaluate the competition.

“Oh my gosh,” he says. “I can hardly stand up, let alone walk. Pretty frustrating!”

And it was that frustration that initially led to the technology behind TayCo’s flagship product, a more functional, lightweight ankle brace. Unlike the boot, TayCo’s brace is designed to be worn over shoes, work boots and athletic footwear. The brace also allows a more natural gait so people  can to return to work, life and even collegiate and professional sports quicker.

Here’s what’s cool about it: the TayCo brace is the brainchild of Mike Bean, associate athletic trainer for the University of Notre Dame’s Fighting Irish Football team. Bean created the first prototype in the mid-2010s and tested it on football players recovering from sprains. Once perfected, he took his idea to the Notre Dame IDEA Center to help with a patent and commercialization. That’s where Ferlic and his father, Fred Ferlic, came into the picture.

Dr. Ferlic is an orthopedic surgeon (now retired) who served as the team physician for Notre Dame’s men’s and women’s basketball teams for 30 years. He took his son Gavin to all of the basketball and football  games he could, instilling in his son a love for the Irish. The younger Ferlic attended Notre Dame on a golf scholarship, intending to follow in his father’s medical footsteps. Instead, he caught the bug to be an entrepreneur.

“I knew mid-way during my college career that medicine wasn’t going to be my path forward. After graduation, I played professional golf for a few years, earned a law degree and an MBA, and then worked for startups and established companies in South Bend. In addition, I served on South Bend’s Common Council and Redevelopment Commission. I had this strong desire to improve the community that gave so much to me,” he says.

While working at another startup company, Ferlic got a call from the IDEA Center about a technology he and his father might be interested in, Bean’s ankle brace. “My dad immediately saw the opportunities beyond athletics and said it was a great idea for a company. So we, my dad, Mike (Bean) and I, licensed the technology from Notre Dame and launched TayCo Brace in 2016,” explains Ferlic.

Thanks to Bean’s relationships across collegiate and professional football, TayCo was on strong footing from the beginning. Battle-tested by the Irish football team—at one point more than ten players competed while wearing the brace to either stabilize or prevent injury—the TayCo brace has experienced rapid adoption.

“Mike, as an athletic trainer with one of the best football programs in history, has tremendous credibility,” Ferlic says. “Early sales were fueled by our athletic brace. Today, 65 NCAA football teams and 17 NFL teams use TayCo braces. Some universities even use the brace prophylactically on its offensive and defensive linemen during practice and on game days to avoid injuries and help those with sprains heal faster and continue to move.”

Ferlic adds, “Athletic trainers and players like our braces because they’re both supportive and comfortable.”

TayCo’s larger market; however, is the medical market, targeting primarily the orthopedic surgeons, sports medicine physicians, and podiatrists who treat the majority of ankle injuries. It’s in this difficult to reach field that Dr. Ferlic, TayCo’s president, medical director and visionary, is worth his weight in gold.

“He understands the needs of patients, who range from active young adults to seniors to workers injured on the job, and as a result, he has led improvements to the brace for this market,” explains Ferlic. “For example, the athletic brace allows plantar flexion and dorsiflexion of the ankle, while providing stability for inversion and eversion. The newer medical brace has a setting so free motion can be turned off to hold the ankle in a fixed position. This is important as some physicians want that fixed position in the early days of treatment.”

Adds Ferlic, “My dad is also a passionate marketer to the physician community. Physicians are very loyal to devices and tools they’ve used for years. It can be hard to change their minds and get them to use something new, but he has been very successful in communicating with physicians to convert to TayCo.”

TayCo’s Braces are prescribed by a patient’s doctor so winning over the medical community is absolutely necessary. One tactic the company’s using to overcome this barrier is to sell through  established medical supply distributors with established relationships with physicians. Dr. Ferlic continues his outreach efforts, but a major shot in the arm was recently winning two high-profile awards, the 2020 Ortho Challenge and Podiatry Today’s Top 10 Innovations in Podiatry for 2019. The latter came with a ringing endorsement of Patrick DeHeer, DPM, a diplomate of the American Board of Podiatric Surgery.

Heightened awareness has led to adoption by prestigious orthopedic practices like the Steadman Group of Vail, Colorado, and the Andrews Institute of Orthopaedics and Sports Medicine in Alabama and Florida. Both groups are respected as pioneers and thought leaders in orthopedics.

Startups like TayCo can’t operate on accolades alone. After early bootstrapping, the company completed a pre-seed round in 2020 with Notre Dame’s Pit Road Fund and the founder of its manufacturer. They are now in the process of closing a seed round that sought to raise $700,000. Due to strong interest from institutional and angel investors, Ferlic says the round may oversubscribe to up to $1.2 million. The reason? “It’s a phenomenal product,” he says.

Other milestones have buoyed Ferlic’s outlook for TayCo. The company has hired three full-time employees who work alongside he and his father. In addition, TayCo’s manufacturer, Surestep, has expanded its facilities and hired employees in South Bend as a result of TayCo’s success. This is especially meaningful to Ferlic whose goal is to create jobs and grow the local economy.

The other major win is the response from those who have benefited from wearing a TayCo Braces, including industrial and foodservice workers who have been able to return to work more quickly thanks to braces they can wear over their OSHA-approved footwear. “Many people have contacted us, some in tears, thanking us for our brace. Physicians who’ve been referred by friends or colleagues, also reach out, which shows we’re doing something right,” Ferlic says.

Ferlic’s advice to those who want to flex their entrepreneurial muscles is taken from his days as a professional golfer and the
importance of incremental improvement. “It’s easy to become impatient when you don’t reach your goals right away, but it’s important to focus on the process, observe and celebrate each and every win and improvement.”