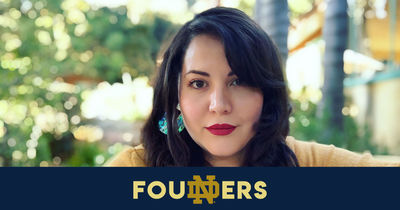 Lisa Fabrega is confident, outgoing and gracious. She values freedom and the ability to speak her mind. Even over the phone, she exudes warmth and humor.

It’s somewhat surprising to learn Fabrega’s early years were spent under a violent dictatorship in Panama, something few Americans can fathom. She has vivid memories of her school bus being stopped by military officials on a kidnapping mission, being exposed to tear gas, seeing the disparities between the elites and the extreme poor, and witnessing the rioting and looting that accompanied the overthrow of General Manuel Noriega in January 1990. At age 15, the Fabrega family immigrated to Tampa, Florida, to start a new life.

Once there, Fabrega faced a new challenge, integrating into American culture. As she came from a developing country, her new teachers assumed Fabrega’s past education was inferior and wanted her to repeat a year of school. Undeterred, she proved her academic mettle and earned spots in advanced placement classes. When classmates were less than accepting, she persevered and made friends. In her first professional career, acting, she learned the painful lesson of rejection at the endless casting calls.

Despite the difficulties she observed and experienced during her growing-up years, and maybe because of them, Fabrega has thrived. Today, she is very, very successful in her leadership coaching business and counts among her clients Oscar nominees, executive women with seven and eight-figure businesses, along with founders of Nobel Peace Prize-winning organizations.

There are several sources of inspiration in her life: her father’s courage, her extended Latin-American family’s love and the University of Notre Dame, which, she says, gave her the gift of critical thinking.

“Notre Dame opened up my mind. The diversity of perspectives from my professors, the respect for a person’s individuality—it informed and shaped me as a person. I learned to think for myself, to think responsibly and show up as a leader. I still value what the University taught me to this day,” she says.

During her time at Notre Dame, Fabrega discovered and developed a passion for the theater scene. She was cast in a lead role in Henrik Ibsen’s play, Hedda Gabler. Acting led to directing, and while working on a play her senior year, a professor pointed out her obvious talent and suggested she go to graduate school.

“This was something I’d never considered, but I took his advice. To get into a theater program, I had to go to Chicago and audition before university representatives. So here I was, in a dark theater with hundreds of nervous students waiting for their turn onstage, not really understanding the enormity of it all. When it was over, I was invited to attend two of the most prestigious graduate programs in the country and chose the Mason Gross School of the Arts at Rutgers University,” she says. “Off I went.”

From 2000 until 2010, Fabrega worked as an actor, singer and songwriter. She met casting directors in Los Angeles and New York City, landed roles in plays and independent films, and secured an ongoing contract doing voiceover work for Canon International. And, she endured so many rejections that she learned a new life skill. Resiliency.

To supplement her acting career, Fabrega took a corporate job and did so well she eventually had to choose one or the other. On a whim, she came up with a third solution: become a nutrition coach. She attended a coaching school and began to build a clientele. The funny thing was, no one wanted to talk about nutrition. Instead, clients discussed career issues, not getting raises or promotions, or being unable to make it to the next level of sales or income. Fabrega began to notice the patterns in these sessions, causing her pivot to leadership coaching, group retreats and workshops.

She came at her newly focused business with all of the bumps and bruises, challenges and achievements, and above all, an innate sense of empathy, accrued over her life. “Given where I had come from, life under an oppressive dictatorship, I realized we have no control over the systematic oppression or privilege we’re brought into, be it gender, skin color or social standing,” she explains. “There is something that allows us to either overcome or succumb. To me, it’s an issue of capacity: do we have the capacity  to overcome whatever is holding us back?”

Building her clientele, she initially targeted women who had already achieved significant career milestones. The reason being that these women, or womxn as Fabrega prefers to call them to avoid gender stereotypes, have the potential to be fire starters, showing others how to overcome solvable barriers. She then opened her arms to all, regardless of gender or identity, who want to expand their capacity.

By 2014, Fabrega’s business had exploded. Her waiting lists had waiting lists. Not knowing how best to handle the success, she became overwhelmed and burned out. And for the first time in her career, she began to make poor decisions.

“In 2015, I invested $100,000 in a new business model and it tanked. I realized my problem wasn’t a strategy issue, it was a capacity issue. I was too focused on growing my business and forgot to ask myself, ‘How to I handle, hold and receive my success?’ The experience was so traumatic, I spent a year regrouping.”

That year was both a powerful investment in herself and her business. Her personal journey coupled with observations gained from interactions with more than 75,000 people led her to develop a proprietary process called The Capacity Code™ that centers on six key areas where high performing women and men need help expanding their capacity, including purpose, boundaries, embodiment, money, visibility, and structural.

“It’s been my experience that once a woman reaches a certain level of earning and success, she needs to stop obsessing over strategies, hacks and tactics, and instead start focusing on how she sees herself and her capacity to recognize and manage various aspects of her life,” Fabrega says. “People who are growth and results-oriented are always looking to go to the next level of their impact and success. My coaching and programs appeal to coaches, entrepreneurs, corporate executives, artists, speakers and creators, anyone looking for capacity but who just has not put their finger on it.”

Fabrega is fortunate because in her efforts to address her own capacity, many of her offerings are delivered virtually. Thus when the COVID-19 pandemic hit and people were forced to lead and manage their businesses from home, teach their children from home, and deal with the stress of the new normal, Fabrega was well equipped to help clients recapture emotional control in what has been a highly stressful time.

She herself has drawn inspiration from Queen Elizabeth, who at the start of the pandemic lockdown in Great Britain, with a speech that was to the point, not sugar-coated, but left people with hope. Says Fabrega, “As leaders, our audiences expect us to communicate, whether you’re leading a corporation or a country. The Queen struck the perfect tone.”

She adds, “If you’re growing as a company or as a person, you’re always going to experience new challenges. You just need to the capacity to flex and grow all the time.”

In terms of her own capacity, Fabrega is adding to her company’s structure to include more affordable programs to accommodate more clients. She also has plans to write a book—when she has time. She works constantly to expand her own capacity.

“I always show up as myself, not a coach. I’m opinionated; sometimes I curse, sometimes I’m polarizing. I’m vocal about freedom of speech,” she explains. “Some people are afraid to be themselves and of being judged or rejected, but you have to trust your instincts and be yourself. I’ve never done things how they were ‘supposed’ to be done”

Fabrega attributes her success to sheer hustle. “When I first started, even if I had one person on the monthly webinar, I kept doing it. Consistency, persistence, integrity, and capacity; these are must-have qualities. If you’re going to grow a business, you also have to grow yourself to deal with an angry client or manage through stressful pivots.”

What’s been most satisfying as a founder is seeing the impact on people’s lives. “I’ve seen marriages saved, businesses thrive, people who were burned out and overwhelmed regain their sense of purpose. Also, it’s seeing the change my clients are making on the world,” she says.

Febrega’s advice to those who want to start something is not to listen to detractors and have a group in the same space who understands what it takes to build a business. “If you’re going to show up as a good leader, you need support: business coach, personal trainer, therapist, whatever you need to create and sustain the capacity for what you’re doing.”