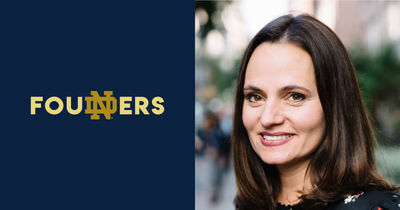 Jeannine Parise has two speeds, full-steam ahead and full stop. That applies to her career and her family, both of which she calls her “important work.”

So how does a serial entrepreneur with a successful exit from her first startup, a second thriving company, a loving husband and four children under the age of ten, and a global pandemic that finds her business and family under one roof, bring it all together? Three things: Parise has a strong sense of self, understands the importance of finding people who complement her strengths and weaknesses, and a deep sense of gratitude.

An only child who grew up in the Bronx, Parise had moxie. She was the girl who organized the senior cruise for 550 classmates, walking around with over $10,000 in her fanny pack for the down payment. She was the girl who won “Best Anchor Person” among all catholic high schools in the Archdioceses of New York for a news story she wrote and delivered on an instructional television channel.

She is also the girl who told her parents, long-time University of Notre Dame fans, she was not going to school there. And then she did. Gladly.

“When I was little, I would tell my parents, there are all Irish people at Notre Dame. I’m Italian,” she says with a laugh. “Then I visited campus and felt at home, at peace. Everyone at Notre Dame was kind, caring, well rounded, and super smart.  It was the best of the best and I wanted to be a part of that.”

Arriving on campus freshman year, Parise tried out for the Irish cheer team. Realizing collegiate-level cheering was more about tricks and standing on shoulders, she did a quick pivot, joining Notre Dame’s hiphop dance team. “We performed all over campus and off campus.  Senior year I was president and produced, directed, and choreographed the talent show in Washington Hall. It cemented my love of event production,” she says.

That same year she was also orchestrating something bigger: landing the best job. After 26 interviews, she decided to join Ernst & Young, a British multinational professional consulting services network also known as EY. Recognizing her talent, EY deployed the 22-year-old on a series of high-level consulting engagements that took her to Hamburg, Germany; Amsterdam, Netherlands; and Tokyo, Japan; and then back to San Francisco.

Parise herself is amazed by the responsibilities and expectations of her first job. “Straight out of college, I was traveling all over the world, working 20-hour days and sleeping on the floor of my office. I loved it.”

When a successful project she was running at EY came to a close, she left her dream job to enter the world of contingent labor—independent contractors or other outsourced and non-permanent workers hired on a per-project basis. This led to the founding of Parise’s first company, Foundation Systems, which she founded in 1999 at age 25.

Ahead of its time, Foundation Systems was a national IT and professional staffing firm that embraced the Managed Services Program and Vendor Management Systems. As the founder and sole owner, Parise launched her recruiting operations subsidiary from scratch in Bangalore, India, growing it to 45 people working three shifts. From 2004-2009, the business realized more than 900 percent revenue growth, producing two times the staffing volume of traditional firms at one-third the cost. She did it without venture or equity funding. Instead, Parise fueled growth by reinvesting profits and tightly managing the company’s growth curve.

The effort paid off. Parise secured a spot on the Inc. 500 list, and in May 2009, she sold Foundation Systems to a multinational information technology services company. At the time, Parise was the only American woman to start and solely own an Indian Private Limited.

Here’s what’s interesting about her exit. It wasn’t about the money. Parise wanted to get married and have a family. What’s more interesting is she hadn’t yet met her husband.

“I was working 22-hour days and dating a guy who dumped me. This taught me a lesson. I couldn’t do both. It wasn’t the time, it was the energy. I was stressed all the time, which doesn’t make for a good relationship. I knew if I kept going with Foundation Systems, I wouldn’t be a great wife or mother so I sold the company,” she explains.

It’s hard to imagine giving up one’s business for the unknown, but Parise unapologetically did. And she did meet a great guy, had four children and then in 2010 founded a new company, ClubVMSA, that curates and produces highly interactive virtual experiences for global talent leaders to connect and engage. At her side was long-time collaborator from Foundation Systems, Jim Coughlin, and—surprise—her husband, who gave up a successful consulting career to join her in ClubVMSA after the birth of their last child five years ago. Parise is in awe of and grateful for her husband’s sacrifice.

“He prioritized our family. While working together has been an adjustment—kind of like the Tony Danza sitcom Who’s the Boss—we found a rhythm and support each other in literally everything we do. Work, family, self-care; we work together holistically in every single thing we do,” she says.

The COVID-19 pandemic created new wrinkles for Parise. ClubVMSA’s value proposition was amplified due to the fact that its networking events, training, and advisory offerings have always been offered virtually so there was no scramble to adapt. With schools being shut down, she and her family moved from New York City to Connecticut, where they are close to Parise’ parents and better able to home school. Despite the changes and challenges, family and business have flourished.

For Parise, it’s all about prioritizing. “Our focus, first and foremost, is family. My parents are in and out. My kids are happy. If one of them walks into a Zoom meeting I’m having, it’s O.K. I introduce them. Keeping calm, providing for my family, and being present helps me not feel overwhelmed.  What I’ve come to realize is that I’m capable of an infinite amount of love and almost as much energy in my work.”

When she does feel overwhelmed or down, she turns to gratitude. “I am so grateful we have each other and this time together. It’s a blessing.”

Parise offers this advice to others who want to start a company. “Don’t wait or quit your job; do it in parallel. Put the time in early in the morning or late evening. I do my best work at 4:00 a.m. Also, know yourself and what you’re not good at. Then find someone who complements you as a partner, employee or sounding board. You can’t do a business, or life, in a vacuum.”