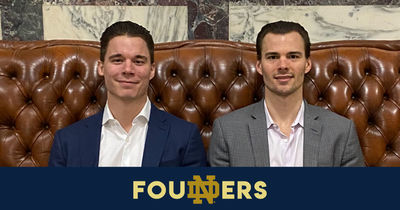 Growing up in the Chicago suburbs, in a big, sports-loving Italian family, with a grandfather and father who proudly graduated from the University of Notre Dame, one just naturally has an affinity for the Irish. So how is it that Christopher and William Salvi, brothers and high school football players found themselves far from South Bend their freshman year of college?

In Christopher’s case, it was the lure of a football scholarship to Butler University so off he went to Indianapolis. As for William, he wasn’t sure he could get into Notre Dame so he headed south, deep south, to the University of Alabama.

But life has a way of working out. The Salvi brothers both excelled academically their freshman year so both applied to Notre Dame as transfers, Christopher in 2009 and William in 2010, and were accepted. Likewise, they both found their way to Dillon Hall.

Here’s where it gets interesting. Ultimately, both played football for the Irish as walk-ons. The fourth of five Salvi children, Christopher took the lead over William, number five in the family order. As soon as he arrived on campus in the fall of 2009, he hounded the football team’s player personnel people, begging for a tryout. When that fell on deaf ears, his coach from Butler intervened on his behalf. Christopher earned a workout for walk-ons in the fall (typically something that happens in the spring) and was able to join the football team that season. He went on to earn an athletic scholarship his senior year and three varsity letters.

William followed in his brother’s footsteps, walking on the spring of his junior year in 2011. They played defense together during the undefeated season of 2012 that saw Notre Dame take on the Alabama Crimson Tide in the national championship game. Though the Irish fell short, it was a dream come true for the Salvis. The grit it took to fight for and win spots on a top tier team made them the men they are today.

Says William, “Football taught us how to persevere and how your daily habits define your success.”

Adds Christopher, “We loved the boos we got at opposing stadiums. That was our juice.”

Adversity has remained the Salvi’s motivational juice. In 2016, the pair decided to start a digital marketing business that specialized in video in Chicago. They noticed how bland and sometimes cheesy the websites and marketing efforts of professional services firms such a lawyers were and thought they could change it up. Trouble was, neither had a business or marketing background; they’d earned degrees in political science.

Undeterred, they went to BestBuy and bought a camera to learn the video production business. It wasn’t even a video camera; it was a still camera. They still laugh at their unintended mistake.

“We were pretty clueless,” admits William, “but we both fell in love with video and video production. We got mentors, joined professional groups, and kept getting better and better. The business became our passion.”

They founded Salvi Media in 2017 as a creative video agency to help brands excel in digital media. They began by targeting medical practices, law firms, insurance companies, and non-profits that knew they needed videos, but didn’t understand how to make video work for them nor did they have six-figure production budgets.

“Traditional video marketing is a flawed concept,” William explains. “You produce a million-dollar ad for the Super Bowl and it goes viral and your company’s immediately famous. Rarely does that happen and it doesn’t happen for small companies that need affordable, ongoing video content to reach their markets. Unlike a video production house, Salvi Media is strategy driven; we make video in all of its forms work together cohesively, whether it’s shot by a client with a smart phone or during a Zoom call or higher quality produced content we create.”

Focusing on this holistic, collaborative approach to production and hands-on service—Salvi Media sends clients “do it yourself” video kits that include a video camera, lights and a mic for their computer—efforts that set them apart from competitors that often see themselves as creative prima donnas and thus the sole creators of video.

Christopher, who focuses on business development, explains Salvi Media’s approach. “We are in a creative industry but at the end of the day, our business is designed to propel brands forward. So while creativity is subjective, strategy and ROI are objective. To do what’s best for the client requires there to be trust between the client and the producer. Trust drives the creation of digital assets for a brand, which drives web traffic and ultimately sales.”

He adds, “Trust is our juice.”

Though starting Salvi Media was a leap of faith, not starting the business was a “scarier” prospect. The brothers admit they didn’t make good employees, preferring to control their own destinies. They originally bootstrapped the company, but after seeing Salvi Media gain traction, their father made a small seed investment in exchange for an equity stake. He also serves as a strategic advisor. With the capital infusion, the company continued to grow and today has three full-time employees, four contract employees, and another group of contractors they work with on a regular basis.

Their goal is to be the best video strategy firm in Chicago, but that goal appeared to be sidelined when COVID-19 shut the Windy City down last March. Only quick thinking by the Salvis kept the business on its growth track.

“The pandemic forced everyone to move online so we immediately added new revenue streams—livestream video capabilities and began hosting virtual events, conferences , and even funerals for clients. With everyone having to move online, this became a net positive for Salvi Media. I feel guilty saying it, but the pandemic helped our business,” says William.

The Salvis believe 2021 will be their breakout year. Their confidence is high and their client list is growing. They’ve completed projects for Notre Dame, Northwestern University, HubSpot, BMO Harris Bank, and countless law firms. They’re in the midst of producing a video series that profiles celebrated Chicago CEOs like Tom Ricketts of the Chicago Cubs. On the near horizon is a documentary series on the civil justice system.

Both find the process of video storytelling humbling and exciting. And while it was difficult for Christopher to shed his identity as an athlete, taking up the mantle of entrepreneur with brother William “feels like what we’re supposed to be doing.”

“This business is ours and everything is up to us. We’ve created a collaborative, productive environment where conflict is good.” He laughs and continues.

“What can I say; we’re Italian. When you got something to say, say it and move on. We head butt but it’s always respectful conflict.”

William concurs. “Don’t be nervous about working with family. I feel closer to Christopher than I ever have. If you can’t have a hard conversation with your partner, family member or not, you shouldn’t be in business. Take ownership of your role, expect it to be a roller coaster and enjoy the ride.”