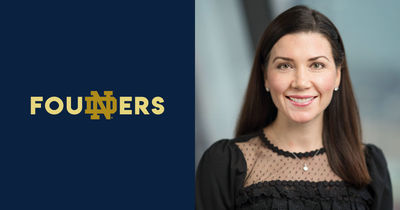 When Buyouts Insider named Michelle Noon to its annual list of 10 Rock Star Women in Private Equity in March 2020 and The Wall Street Journal named Noon to one of “The Most Influential Women in Private Equity” in November, she was delighted to be honored and felt she was in good company. Then she got back to work on her new firm private equity firm, Clearhaven Partners, which specializes in lower middle market B2B software companies.

Noon is somewhat of a rare breed in private equity circles. Yes, there’s the female thing. But even more rare is being a woman who earned her chops leading deal teams and now heaps up a private equity firm specializing in investing in tech companies.

Noon grew up in St. Charles, Illinois, with two brothers. Her parents, both University Notre Dame graduates, had the same expectations for all of their children: capitalize on your talents. And so, Noon enrolled at Notre Dame, choosing finance and business economics as her major, a traditionally male dominated degree.

She shrugs her shoulders ever so slightly at the memory. “I am who I am. If you dwell on something like gender, you can feel frozen. I grew up with brothers and the expectations were no different among us in my family so I really never gave it a second thought.”

She adds, “Over time, I have learned that while private equity investing involves transactions, what I do is not simply transactional. Each deal has multiple stakeholders who must be considered. I am absolutely drawn to the problem solving and rational thinking parts of investing. However at the end of the day, this business is all about people and expectations and that part often requires judgment calls and creativity to get deals done. It’s what happens on top of the numbers that’s interesting, and frankly where I believe differentiation lies among investors.”

Noon began her career as an investment banking analyst with Morgan Stanley in New York City, a period she says, “gave her a financial toolbox” and reinforced a meticulous attention to detail.

“I learned how financial transactions worked and how to execute them. But I could see on the periphery of my role an enormous number of deal considerations that were not purely financial. I also learned the limits to what one could do in an advisory capacity and I sought to move to the principal side of a transaction where I could also make decisions and act on the analysis,” she says.

In her second year as an analyst at Morgan Stanley, Noon met a well-known software investor who recruited her to join his team in San Francisco. Over the next several years with the firm now called Thoma Bravo, she built a deep appreciation for software investing, an affinity she has continued since, including as a general partner with Riverside Partners in Boston, where she spent 11 years.

“Part of what attracted me to the sector was the basis of a good software business made it a great private equity buyout candidate. Also, it was clear that technology was becoming a more fundamental market in and of itself. Fast forward to today and tech has never been more important to the U.S and global GDP than it is now. The investment opportunity has never been greater with tens of thousands of addressable assets in my target market,” Noon says. “While much has changed in software over the last 20 years such as revenue models, development methodologies and infrastructure models, what hasn’t changed is ‘what good looks like.’ That relates entirely to mission criticality, strong recurring revenue, high gross margins—the things it takes for a company to grow profitably and that allow investors to sleep well at night.”

In 2019, Noon decided to leave  Riverside Partners to form her own firm, Clearhaven Partners. She saw an opportunity to do exactly what she had been doing in leading deals at a team level, but now to the exclusion of all else in a new, standalone firm. Noon believed that with the significant marketing opportunity for her software and technology strategy available, she could be more effective for investors.

There was something else driving her decision. “I was at a point in my career where it was time to bet on myself and create a firm with a shared set of values and integrity. There are downsides to starting from a blank sheet of paper, but one of the major upsides is picking a team and creating a culture centered on different perspectives but shared values. I also wanted to be very intentional in our investment process and focus on partnerships with our team, portfolio companies and investors,” she explains.

Noon launched Clearhaven Partners in Boston in August 2019. She was joined by her co-founding partner who is a 30-year technology operator and with whom Noon had worked extensively on previous successful deals. Clearhaven’s strategy is consistent with its founders’ prior experience—targeting lower middle market software and software-driven technology companies with mission criticality, proprietary IP, a minimum of $20 million in revenue, and those seeking an operationally-oriented investment partner such as Clearhaven for the next stage of the company’s growth.

Noon also focused on recruiting experienced, self-starters who flex well above their job titles. “We now have an excellent team of seven and plan to grow to approximately ten over the next one to two years,” she says.

Clearhaven’s approach to investment origination, spearheaded by Noon, is thematic and meant to identify high quality segments, grounded in long-term structural demand factors and market tailwinds that support business productivity and automation through the use of software. The targeted, thematic approach allows her small team tackling a large market to do so while generate a high yield on its activities.

What Noon has found most difficult about founding a private equity firm is not deal making or fundraising. Instead, the biggest challenge is managing herself. “I’m normally a very even-keeled person, which is a good quality for a deal-maker. What I’ve found as a founder is that the highs are higher and the lows are lower. As a result, I’ve needed to more actively manage my own expectations.”

She likes to say that Clearhaven Partners was forged in the fire of a global pandemic. “No one in their right mind would choose this particular year to start a firm unless you were entirely convinced of the long term prospects,” she says. “Our team has had to overcome the usual intensity of a founding period but do so in 2020 is going to be the source of mettle for our organization. I’m incredibly proud of the resilience and hard work of our team this year.”

Through Noon’s experience in her industry over multiple decades, she has been able to carry forward elements that worked well in the past and leave behind aspects that she believes don’t work as well in private equity. “The ultimate goal as an investor is to create great returns for our investors. It’s my strong belief that we can do that while creating a values-based, performance-driven environment for our team and our portfolio companies.”

Noon believes there has never been a better time to build a business using technology. She urges entrepreneurs to not be deterred by their own naivete or fear of failure and to explore new ways of doing things as there are many paths success and fulfillment.