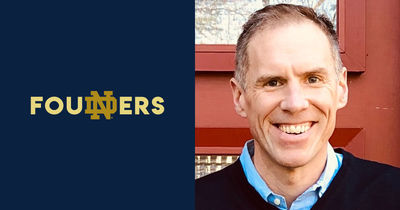 When Doug Morrison and his wife Colleen and their daughter Erin moved back to South Bend in 2010 to be close to family, the University of Notre Dame alumni returned to the hallowed halls. Not out of nostalgia; he was on a mission to identify an investable technology to license and launch a company.

“Growing up, Notre Dame was all I knew. People I respected had gone there, which influenced my decision to attend. Later, as an entrepreneur, I knew a lot of important things were happening in Notre Dame’s research labs and I wanted to bring it out,” he says.

Given today’s reliance on information technology, Morrison could have started in the computer science department. Instead, he headed to the Chemical Engineering Department where he met faculty members who were developing organic solvents for several promising applications, including electrodeposition of protective metal coatings like chrome.

You know chrome; you just don’t know it. It’s the shiny metal coating on Harley Davidsons, John Deere tractors, the stacks of Freightliner semis, and thousands of other metal products. Depending the end use requirements, chrome can be used either as a decorative or as a functional coating that's achieved using hexavalent chrome and sulfuric acid. Not that Morrison is a chemist – far from it – but he saw something special in the technology and an opportunity to radically change a common area of hard tech with a load of problems.

“Did you ever see the movie Erin Brockovich?” asks Morrison. “Hexavalent chrome is what leached into the groundwater in Hinkley, California, caused a spike in cancer rates, and ultimately led to the largest legal settlement ever paid in a direct-action lawsuit in U.S. history. Even though it’s commonly used, hexavalent chrome plating poses a huge health hazard for workers and is heavily regulated around the world.”

He continued, “So if someone had a safe, organic chemistry-based alternative, it would be a huge win for people, the environment and industries that rely on chrome plating.”

Although attracted to the technology, Morrison had a tough conversation with himself before pursuing it. Two things swayed him: a desire to move hard tech faster and a hunch. “The professors I was talking to had funding from the U.S. Department of Energy. I thought to myself, smart professors, smart government—there must be something here.”

The two co-founders soon realized in order to take this to the next level they needed additional growth capital and commercialization expertise. Through the IDEA Center the pair were introduced to Tim Sutherland, a member of the Notre Dame Board of Trustees and chairman and CEO of Middleburg Capital Development, a family office in Virginia. Trion Coatings became one of the firm’s first investments, infusing capital at the critical seed stage.

“We were working nights and weekends,” recalls Morrison. “The timing was perfect.Along with Tim’s son and partner, David, also a Notre Dame alum, we had had a diverse and deft team to take our now patented ionic fluid technology forward to the market.”

The net result of that early work is a novel industrial coating process called SAFE Chrome™. The process replaces toxic and carcinogenic hexavalent chrome with an environmentally friendly and safe alternative. Like hexavalent chrome, SAFE Chrome improves the wear resistance, hardness, and corrosion resistance of steel substrates and expands their performance and range of application, but without the harmful effects.

Those performance attributes are critical. While safety and sustainability are great conversation starters, engineers want to know how SAFE Chrome measures up when the rubber meets the road, or in this case, when coating hits the steel. For this reason, the Trion Coatings team has invested countless hours meeting the engineering requirements of AMS2438 for thin, hard, dense chrome plating. “We have to meet this standard or it’s a non-starter,” Morrison says.

As with any startup, Trion Coatings required market credibility and strategic access to key market verticals. , the Trion team started working the IDEA Center’s networks. One of his targets was Nucor Steel, the largest steel producer in North America that earned this status by innovating how steel is produced and displacing industry giants in the process.

“I searched the Notre Dame alumni database and found five names at Nucor. Then I started emailing. After reviewing the technology progress Trion had achieved at the time, Nucor executives came to meet us at the IDEA Center.  They were intrigued with the technology and the environmental and safety features offered by SAFE Chrome  as Nucor places a very high value on environmental stewardship and safety. Our alignment of interests was perfect,” Morrison says. Nucor Steel is now a minority owner.

Seven years into the company and timing is again coming into play. Trion Coatings has been talking with metal finishing “job shops” as well as very large captive operations owned by multinational global brands. Each has very specific requirements, so the Trion Coatings team has been taking parts and applying the SAFE Chrome to the parts to demonstrate the efficacy of the technology. Once the testing is completed to their satisfaction, they approach the companies about doing collaborative beta tests.

Morrison is looking ahead to significant progress in 2021. First, he believes that manufacturing, including chrome plating which has been offshored in many cases to China, will continue to return to America as the COVID-19 pandemic revealed serious vulnerabilities in global supply chains. In addition to Nucor which holds rights to certain applications, Trion plans to bring on multiple large brands as customers in 2021.

Says Morrison, “I agonize, dream, and think about Trion Coatings all the time. I’m 47, have an MBA and I’m mopping floors. Starting a company is incredibly difficult. In hard tech like chrome plating, it’s especially chaotic, messy and uncertain. It’s easy to see why people fold their cards and walk away.”

That’s not to say the journey isn’t satisfying. For motivation, he cites a favorite entrepreneur, investor and software developer, Marc Andreessen, who has challenged fellow Americans to rebuild the American Dream with all types of technology—including hard tech. Says Morrison, “We are building something and getting bloody knuckles and dirty fingernails in the process! The best days are when I know we’ve moved the technology materially forward. That puts a big puff of wind in your sails and makes us feel anything is possible.”

Morrison’s has some straight-shooting advice to entrepreneurs looking to commercialize university technology: Either go all in or don’t go at all. “If you’re looking at early-stage technology in a university, don’t over-glamorize what you’re doing. Find technical people, like our CTO Mauricio, who are committed to be full partners in the process. You can’t have people who dip in and out. The company and the technology has to be their daily existence. Anything else and you’re just burning capital, time and opportunity.”