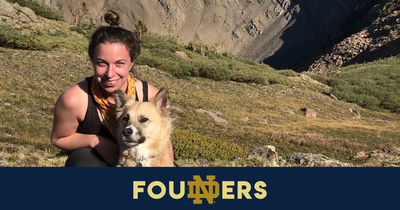 Two years ago when seeking a new athletic challenge, Mary Cornfield stopped in at the largest indoor climbing gym in Colorado to join. To her surprise, they handed her a paper form. Definitely not digital friendly. She joined anyway, becoming a social climber, but the interaction sparked an idea for a company that is now poised to rock the global indoor climbing industry.

How did that happen? Easy. Cornfield has been preparing herself to launch a company since childhood and when a glaring market pain point, a global pandemic, and a job furlough collided, she was ready to go all in on a problem-solving tech startup.

“My role models are my dad, my grandpa and great-grandpa. All of them started companies from scratch and controlled their own destiny. When it was time to go to college, I chose the University of Notre Dame because the Mendoza College of Business is one of the top undergrad business programs in the country. I found the emphasis on ethics appealing; it really stood out from other programs,” she says.

Cornfield supplemented her finance major with a minor in entrepreneurship. Toying with the idea of going into venture capital, she interned with the Notre Dame Investment Office and the Irish Angels. Both experiences were invaluable for applying what she learned in class to the business world. However, it was her time with the Irish Angels that made a deep impression on her.

“Screening so many companies, I found I really liked the measured approach of B2B. Also, Midwest investing is more conservative than the Coasts and as a result, gets better results. I adopted that ethos in my own approach to startups,” she says.

During her senior year at Notre Dame, Cornfield entered the McCloskey New Venture Competition with BlueBucket, a startup that raised money for social causes by partnering with local restaurants. “It was daunting at first contacting restaurants, but the deeper I got into it, the easier it became,” she explains. It was also an easy win—Cornfield and the BlueBucket team walked away with the crowd favorite award in 2015.

She had a “traditional” job lined up after graduation, but instead chose to further her entrepreneurial knowledge base. She applied for a two-year fellowship with Venture for America and was one of just 122 chosen from 1,600 applicants. The purpose of the fellowships is to launch entrepreneurial careers in distressed urban areas thus Cornfield was sent to Miami where she worked with Rokk3r Labs and then a startup called Willing.

She admits dipping her toes in multiple disciplines was done not to become a specialist but rather a purposeful generalist. “Rokk3r Labs is a dev shop focused on early-stage startups; I learned a lot about investing there. At Willing, my role was customer engagement, which meant a little of everything including user research. These soft skills were invaluable. I was also intrigued with the tech side of user experience so when I moved to Denver, I enrolled in Design Lab’s UX Academy to add to my skill set.”

One of Cornfield’s product design assignments was to create an app. A lightbulb went off as she thought about her painful, paper-based experience joining a climbing gym. “I started researching back office software for climbing gyms and what I found was most use a very archaic, non-Cloud-based software platform. In speaking with gyms, I found several needs unique to the industry. First, climbing gyms are high volume, serving some 2,000 guests per day. Second, climbing is a high-risk sport so climbing gyms have a number of regulatory requirements general fitness gyms don’t. It’s a lot to manage.”

Her final finding was particularly painful: poor member retention. “Climbing gyms have about 40 percent member retention versus the 70 percent of traditional gyms,” she explains. “Part of it is the sport itself. It’s difficult, it has it’s own terminology, there’s a lot of gear and not much instruction. So I started working on an app to address the retention issue.”

While indoor climbing may seem like an obscure sport, it’s a high-growth, $1 billion global industry. According to Climbing Business Journal, the net number of gyms grew by 5.2 percent in 2019 compared to 2.8 percent growth in traditional gyms. Additionally, private equity firms are entering the industry in a big way, consolidating “mom and pops” and bringing more business structure. Cornfield says the industry should experience another growth surge in 2021 when the sport debuts in the Summer Olympics in Tokyo.

Cornfield found a development partner, Wesley Verne, who ultimately became her co-founder in Capitan. Still, the startup was a side hustle as Cornfield had a full-time position with TeamSnap. Last March, she was furloughed from her day job due to the COVID-19 economic shutdown, forcing a decision on what to do next.

“I decided to go full-time on Capitan.”

Launching a company during a global pandemic, especially one in the fitness industry, is challenging to say the least. Climbing gyms around the world were shut down last spring and when they did re-open, were forced to adjust to the new reality of operating with less capacity. Air circulation systems have new importance. Hand chalks now have sanitizers in them. Other operational challenges include having to move to stricter reservation practices and the need to communicate changes rapidly and seamlessly. This plays well into Capitan’s cloud-based solution, which helps gym owners to be more digitally nimble.

“We’ve all been forced to change how we live and do business due to COVID, and climbing gyms are no different. Capitan empowers necessary changes like online reservations – largely done on smartphones – and proactive contacts like changing gym protocols or customer re-engagement with promotions. Instead of a negative, COVID will drive adoption of new solutions like Capitan, leading to a better customer experience and addressing retention issues,” she says.

Another benefit of the pandemic is Capitan was able to secure three development partners, climbing gyms in the United States and the United Kingdom. Due to lower capacity dictated by the pandemic, the gyms have had more time available to participate in fine-tuning Capitan’s offering. The gyms check-in weekly with Cornfield and her partner to give feedback and offer suggestions, which has proved invaluable to de-risking and product development.

“Late last spring, our first U.K. partner asked if we could build a prototype for online reservations and payment. Within a month, we had a solution for him to use in his gym to begin accepting online reservations. When he re-opened his outdoor climbing wall in July, our solution handled $300,000 in transactions and 14,000 reservations in the first 45 days and allowed online payment. He was very impressed!” Cornfield says.

After receiving some initial funding from Venture for America after winning Crowd Favorite at the organization’s Demo Day on November 19, 2020, Cornfield and her co-founder plan to continue to self-fund Capitan. She points to Wodify, the creator of an industry-leading gym management software, as the model to follow. “Wodify bootstrapped and now has millions in annual revenue. Staying lean with our operations and scaling the company as we add customers and generate income is key.”

That “do it herself” attitude is part of what Cornfield finds most satisfying about being a founder. “Building a company from the ground up is exciting because of the speed and immediacy of change,” she explains. “It can be basic things like writing a sales contract and having to figure out payroll. But it’s also being able to change our product based on user feedback. That doesn’t happen in large companies.”

From a simple app, Capitan has quickly evolved into a full Cloud-based SaaS solution encompassing document management, customer relationship management, mobile-friendly scheduling, and integrating with gyms’ point of sale offerings like cafes and retail shops. Cornfield’s vision for the company has also expanded.

“When we started, I didn’t think we could go head-to-head with the climbing industry’s main software provider, Rock Gym Pro. While it’s widely used, the software isn’t meeting gyms' needs – we can.”

As she looks ahead to Capitan’s official launch in January 2021, Cornfield offers this advice to future founders: There is no good time to start a company.

“We launched Capitan in the middle of COVID-19; nothing could have been tougher. Once we realized we only needed three gyms to develop our solution, the idea became manageable. So get out there. Cold call. Shoot a message on email or LinkedIn. Grow tough skin. No one is going to give you permission to do it.; just take the first jump.”