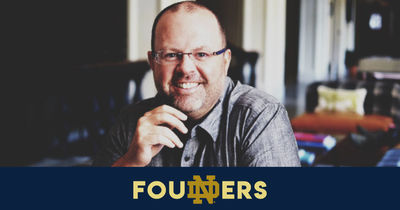 Chris Keefer really didn’t have a choice as to where he’d go to college. The Fort Wayne, Indiana native’s dad was a double “Domer,” his mom went to St. Mary’s and he’d been visiting South Bend since he could walk. Even though he had an opportunity to play Division III tennis, Keefer turned it down in favor of attending the University of Notre Dame.

The only downside was Notre Dame’s tennis team had just come off an NCAA finals appearance against Stanford and lost only one player, so Keefer had no chance of playing. Not wanting to derail his love of the game, he offered his talents stringing racquets to then coach Bobby Bayliss, who took him up on his offer. Over the next four years, Keefer’s role expanded to include line judge and PA announcer, though he admits his Michael Buffer style was not well received.

“I think I was a better heckler,” he jokes, referring to an old-school style of heckling he and his friends employed at Irish basketball games during the 1995-96 season.

After graduation, Keefer went on to earn a law degree at Indiana University and began a traditional career path in the legal profession. He worked in the insurance industry as a litigation attorney and then became a corporate counsel for a global medical device company. From there, he returned to private practice with South Bend law firms while also creating and teaching a drug and medical device class for Notre Dame’s law school.

It all seemed so “normal.” That is, until Keefer’s career veered off in a totally unexpected direction. “My workload had transitioned to almost 100 percent litigation and I was burning out. I realized it was time for a significant transition. After discussing it with my wife, we decided to pursue a master’s degree in sports product management in Oregon, where we wanted to live and raise our children,” he explains.

The family moved to Portland and while at the University of Oregon, Keefer was given the opportunity to spend ten weeks in Vietnam working at Nike’s cleated footwear factory as part of his degree program. He agreed to go and while there, helped executive leadership create strategies around global footwear trade issues, including working with Vietnam’s Ministry of Industry & Trade and Ministry of Finance and the factory’s supply chain channels.

He also learned how to hand-make kids’ football cleats.

“It was a rite of passage at the factory,” Keefer explains. “I had to make a pair of cleats under the guidance of the iron-fisted floor manager, Dao. The final result was not the cleanest pair she’d ever seen, but our middle son actually wore them during his entire football season and they didn’t fall apart.”

After graduating with his masters, he had the opportunity to continue with the company, which also owned footwear factories for Adidas and Under Armour. Thinking it over with his wife, Keefer instead invented the couple’s next career move, a startup law firm called Keefer Strategy. It would become an amazing amalgamation of his past experience in law, academia and business. “It’s amazing how a beautiful path forms when you don’t put on blinders,” he says.

Founding a company is never easy and it’s no different for law firms. There has to be a market need, a pain point, a problem solved. Keefer and his partner in Keefer Strategy, wife Garetta, found a gap in age-old perceptions of lawyers and how legal services are consumed.

“Businesses traditionally view lawyers as reactive resources, to be retained and deployed after things have hit the fan. In the 1950s, the concept of ‘preventive law’ emerged as a form of litigation avoidance. Today, in-house legal departments at large corporations have become proactive and perform the function of risk mitigation and avoidance. This approach is also invaluable to smaller companies; however, it’s cost prohibitive to employ an attorney full-time when only fractional deployment is required. This is the problem Keefer Strategy solves,” he says.

The firm was launched with no clients and with the financial backing of Garetta’s family members. So during the early downtime, Keefer invested in boots on the ground marketing, dedicating countless hours to lunches, coffees, and phone calls with business owners and executives, in-house counsel, private firm attorneys, insurance and real estate brokers, trade groups, and entrepreneurs. Over the course of five months, he estimates he had 120 discussions. Not Zoom calls, texts or emails. Real discussions.

Looking back, he values this unplanned “de-risking” time as it proved out the validity of the market need for preventive law. The inputs received resulted in Keefer Strategy addressing five primary pillars of law: contract negotiation and development, insurance and litigation management, due diligence, compliance, and business governance. Keefer continued to give presentations and publishing articles to educate the Portland business community on how preventive law works and its benefits.

The networking has paid off. Keefer Strategy has attracted a diverse clientele, ranging from startup footwear companies to publicly-traded product manufacturers, along with regional and national financial institutions and global food and product suppliers. Despite COVID-19 and the unrest in Portland, businesses have continued to come to Keefer for guidance on contract and insurance language involving performance and business interruption. New opportunities have come from trade groups across the United States that also see the value of staying proactive during these uncertain times.

Keefer’s advice to others who want to found companies can be summed up in two words: network and present.
“Through initial networking, we were able to finetune our business model and elevator pitch. Then, through continued networking and numerous presentations to trade groups and organizations, we were able to educate prospective clients about preventive law and build referral opportunities.”

He also cautions new founders to be patient. “Things don’t just happen overnight. It takes hard work and thick skin. Ultimately, you can’t be afraid to fail—as long as you always learn and don’t make the same mistake twice.”