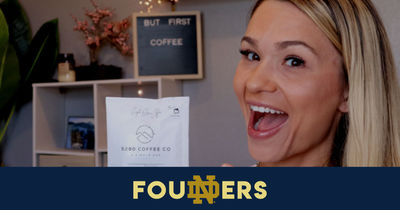 Long before Caitlin Logue entered this world, her parents decided they wanted their child to attend the University of Notre Dame. Her father was a native of South Bend and a loyal Irish alumni. Her grandmother had worked as a librarian at Notre Dame.

So it was only natural that Notre Dame became her dream school. When senior year of high school arrived, Logue was sweating bullets over whether or not she’d be accepted. “I was filled with angst,” she admits. “Notre Dame is an intellectual challenge and I knew I was competing with the best to be accepted.”

When she did get in, Logue chose political science and Spanish as her majors. During her junior year, she decided to pursue a minor in business and registered for a finance class. It would become one of the biggest life lessons of her Notre Dame career.

“The other students were really smart and I struggled! Knowing I had to work harder, I studied every day and got a study partner. Early in the semester we had a test and I was so anxious I got the time of the test wrong. As I was walking in to take the test, my classmates were walking out discussing how hard it was. It hit me: I just failed. The professor wouldn’t let me retake the test. I had to live with the consequences.”

She learned a difficult, and at the time, shattering lesson: how to survive failure. “At that moment, I realized the power of mindset. If you think you’re going to fail, you will. If you think you will succeed, you will. I walked away from the experience feeling extremely grateful to Notre Dame and a deeper understanding of what I was capable of doing.”

Failure creates character and surprisingly, opportunities. When Logue didn’t land what she thought was the ideal after college, she decided to move to Denver after graduation without a job. Having spent time in Colorado growing up, she liked the lifestyle. Soon after arriving, she landed a position with a startup in the advertising technology space, AdCellerant. The company was growing exponentially and for the next two-and-a-half years, Logue concentrated on learning what it took to scale a business.

“I began to wonder, ‘what if I started my company?” My dad started his own business. As a physician, you don’t typically use the word entrepreneur, but that’s exactly what he is. I decided to follow his lead.”

Her motivation was about two things. Logue wanted to create a life for herself, while at the same time giving value to other people and to the planet. While considering ideas for a business, she always came back to coffee. Logue loves coffee. And that’s where a seed of an idea began to take form. Logue doesn’t love coffee pods, the little plastic cups millions of java drinkers pop into their coffee makers for instant gratification. By 2018, Americans were using 20.7 million coffee pods annually,  the majority of which go into landfills.

“Living in Colorado, I became very aware of the sustainability movement. With coffee, I saw an opportunity to give people a green solution for their morning coffee without compromising flavor or their morning ritual,” she says.

Her idea is to replace coffee pods, which are a non-recyclable combination of plastic and foil, with coffee packed in individual bags much like tea but made of compostable paper. The outer packaging is recyclable. The idea came together in early 2020. Logue named her venture 5280 Coffee Co, in honor of her new hometown, Denver, the Mile-High City, and made plans to launch in May. She turned in her notice in early February due to an illness in her family. As she focused on her family, Logue realized she’d lost her “why” for working at her job.

“Denver was completely shut down; it was like an apocalyptic movie. I was now working at home on my own, but throughout it all, I had a new sense of focus and less distractions as I was getting ready to launch the company in May. Fortunately for me, my family and friends backed my decision to launch during COVID. As I learned during my Notre Dame days, fear is in our heads. My intuition said to go ahead and launch. It’s never failed me before,” she says.

“Thank goodness for the Internet,” she says. “However, I found a partner who shares my vision and can grow with me.”

Logue launched on schedule in May with a direct to consumer model, relying heavily on social media and networking with Notre Dame alumni and other connections. She initially offered a medium roast in packs of 10 and 30 individual bags. A dark roast was recently added to the 5280 Coffee Co line. Whichever a customer chooses, Logue also serves up product information that includes brewing instructions, environmental impact, ideal food pairings, and even book suggestions. “It’s part of the ritual,” she explains.

Having her target audience stuck at home and away from their favorite coffee shops has worked to Logue’s advantage. People see the brand on Facebook and other social platforms, get curious and order. She says the goal is to create a great consumer experience in terms of enjoying delicious coffee at home plus the added bonus of helping the environment.

Six months in, Logue is relying heavily on customer feedback. She’s found that people really connect with the product’s sustainability, which makes them willing to try it. Due to the favorable response, she’s exploring opportunities to wholesale her single-serve coffee bags and plans to launch new products in 2021.

Logue admits she was timid growing up. One of the perks of founding her own company is having the confidence to create the life she wants to live. What’s also satisfying is the response she’s getting. “Getting people’s positive feedback and being part of their morning ritual is so gratifying. And, my dad admires my gumption. That’s nice, too,” she says.

Looking back at her years at Notre Dame, surrounded by super competitive classmates and sometimes feeling overwhelmed, Logue offers this advice to future entrepreneurs. “Don’t take yourself too seriously. Try 1,000 different things and find the one you like that’s solving a problem. Then, enjoy the ride!”